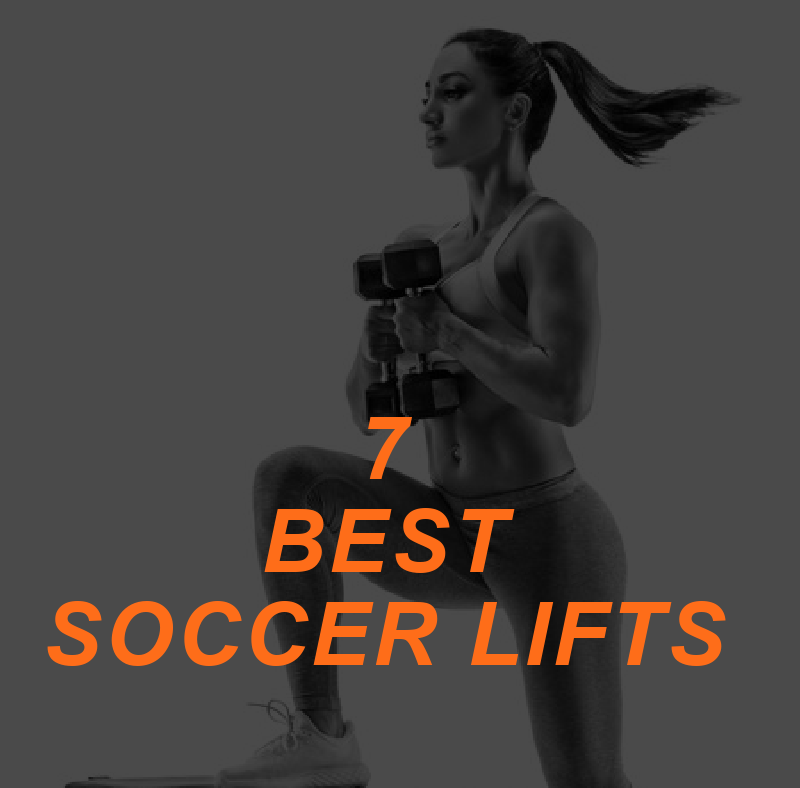 Yesterday’s blog addressed the specific approaches personal trainers can take for programming periodization for soccer players. Now that you’re familiar with the how, let’s talk about the what. Here are the top 7 soccer lifts important for your athletes to train.

The Seven Lifts Every Soccer Athlete Should Master

Lower body emphasis makes sense given that soccer demands are largely placed on the legs. But, leg presses and extensions can only take you so far. Total body strength is necessary to prevent injury and excel. Performing the following exercises 2-3 times per week is probably ideal in all the season phases, addressing personalized needs, goals, and circumstances when appropriate.

Trap bar deadlifts are conventional deadlifts performed with a hex/shrug/trap bar instead of a barbell, shortening the moment arm, so that the grip is neutral alongside the body and the weight is distributed closer to the body.

Like all compound lifts, deadlifts recruit and activate numerous muscles that are of great importance to any athlete, and  soccer players are no exception. Deadlifts are build power and strength in the glutes, quadriceps, adductors, hamstrings, low back, and core.

Core strength serves as a foundation for every athlete and is vital in soccer when sprinting, change direction quickly (agility), and win tackles (plus, having good core strength reduces the likelihood of injuries). Performing deadlifts with a trap bar as opposed to a straight bar can help make the lift easier on the low back while targeting more quad activation. The extra quad activation is important because the quadriceps are the powerhouse of the legs that allow a player to sprint in short bursts, or maintain a steady jog, which soccer players constantly switch between throughout a match.

Romanian deadlifts are just as important when it comes to building the right kind of strength for soccer players. Now obviously you wouldn’t necessarily put your client through two different types of deadlifts in one day but rotating between the two within the program can be helpful when trying to build the strength needed in the sport.

As previously mentioned, deadlifts are compound lifts that recruit a variety of muscles and help to build core strength as well. The reason for doing Romanian deadlifts (either with a straight bar or dumbbells) in addition to trap bar deadlifts, lies in the slight difference in which chain the two types of deadlifts target.

Cleans build speed and power by targeting those important muscles mentioned earlier (glutes, quadriceps, adductors, hamstrings, core, etc.) and doing so quickly. This trains the body to move weight with speed more efficiently. Cleans generate more power that can easily be translated to the pitch, whether that be in sprinting, jumping, or striking a ball. They also can help to increase running speed and vertical jump height, both of which are important in the game of soccer.

The difference between hang and power clean really comes down to where you start with the weight. With a hang clean you start holding the bar just above your knees. In a power clean the weight starts on the ground and the first part of the lift goes through a deadlift motion. For this reason, it may be beneficial to program more hang cleans if you already have a heavy dose of deadlifts. Whichever one you choose, both variations are beneficial.

Goblet squats are another lift that challenges the quads, hips, hamstrings, and calves, to build strength in the legs while still engaging and activating the core. When performed at full depth, squats can also help to improve hip flexibility which is absolutely crucial for soccer players. An added bonus of this lift is that it also involves static upper body strength thanks to holding the weight at chest height.

The step-up is another exercise great for developing all-around strength in the lower extremities while also helping with balance. It activates the same muscles that very closely replicate powerful movements made on the field. For example, Manchester United’s head fitness coach endorses this exercise because it mimics the movements the player will be performing when going from a sprint to a jump to win a header.

Upper body strength is often overlooked by many soccer players but is very beneficial when battling for possession, competing in an ariel duel, or fighting for position to receive a ball. In fact, since sprinting is a simultaneous contralateral action of the arms and legs, building strength and power in the upper body can help increase speed as well. The bench press is a great compound lift that works mainly the pectorals, anterior shoulder, and triceps, but also activates the core and even the traps and back muscles. Variations such as incline and decline can be added to target slightly different areas.

As noted above, upper body strength is very important in the game of soccer and developing it can even help your client run faster. Rowing movements such as this, activate the posterior chain. Single arm dumbbell rows focus on building strength in the mid back, while also activating the lats, traps, and biceps. Utilizing just one arm at a time forces the core to engage to stabilize the spine.

With the physicality that soccer presents, building strength can provide a considerable advantage over an opponent. While these lifts should be included in any soccer players program, these are by no means the only ones that can build strength and benefit your client. So, explore and round out the program with supplemental lifts that will help your client see the improvements to their game! And, as always, instruct your clients to listen to their body for indications of pain, injury, or overexertion.