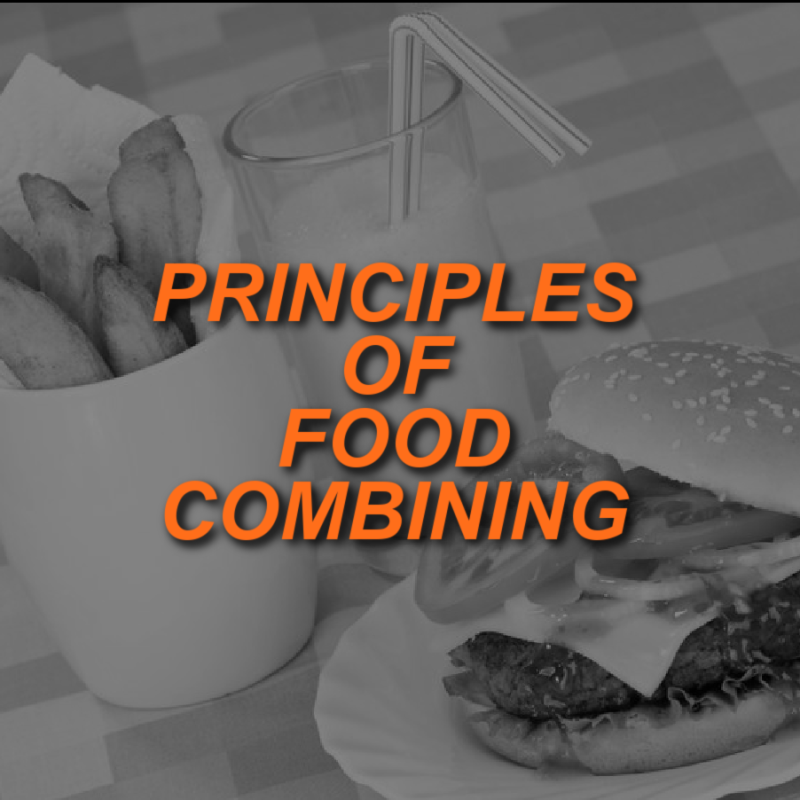 Trophology, or food combining, while ages old in Eastern cultures, has not garnered support from our scientific communities. But like many things that have been targets of scientific criticism, absence of evidence does not equate to evidence of absence. Sometimes, we have to be a sole participant in the experiment of our health, and decide for ourselves if an approach is effective. Because digestion is complex and its effects difficult to measure, (complicated by confounding factors), supporting data for food combining may be sparse, but anecdotal evidence has been strong. If you or your clients suffer from digestive or even skin issues (which often are rooted in GI imbalances) there is little harm in applying the principles of food combining and observing the results.

The information presented below is an explanation of the biochemical principles for proper digestion. These principles are derived from the research of Ivan Petrovich Pavlov (Russian Biochemist).  He was awarded the Nobel Prize for Physiology or Medicine in 1904 for his work on digestive secretions.

Fruits require minimal, if any, digestion in the mouth and stomach and are quickly sent to the intestines where they undergo any needed digestion. Fruits eaten with other food groups are delayed in reaching the intestine. Additionally, the acid in some of the fruits disrupts carbohydrate and protein metabolism. Fermentation occurs in the gut any time fruits are combined with other food groups. Further, the acid conditions caused by fermentation will halt the digestion of carbohydrates and proteins. Bacterial decomposition of the mixed food groups occurs with subsequent formation of toxins. Therefore, eat fruits prior to a meal, usually 20 minutes. Do not eat fruit in between meals when the process of other digestion is still underway.3

Milk with its composition of fat and protein combines very poorly with all foods. The fat in the milk inhibits secretion of gastric juice. The gastric juice that is secreted will have less pepsin and hydrochloric acid. Additionally, milk that enters the stomach forms that then surround food particles, insulating them from gastric juices. Digestion is inhibited for the engulfed food particles.  Once the curd is assimilated, the food particle will undergo fermentation or putrefaction, depending if it is a carbohydrate or protein, respectively. Therefore take milk alone.4

Ptyalin, an enzyme that converts starch to maltose, is in turn acted upon in the intestine by maltase to form dextrose. Maltase and ptyalin are not interchangeable. Ptyalin is a precursor to the formation of result of dextrose, sucrose, maltose, and maltotriose that is the goal. The mixed food is acid at the start. Hydrolysis (enzymatic digestion of starch) from the saliva is halted.

The acids within the foods such as tomatoes, berries, oranges, grapefruits, lemons, limes, pineapples, sour apples, sour grapes, and other sour fruits neutralize ptyalin in the saliva and suspend starch digestion in the stomach. Undigested carbohydrates will undergo fermentation with the end products of alcohol and acetic acid rather than dextrose. Therefore eat acids and starches at separate meals. 3

The gastric juices secreted respective to these two food groups differ in chemical composition. For example, when bread is eaten the digestive juices are secreted in sequence to digest the carbohydrates then the protein components. The first phase is neutral, with the second phase of secretion containing hydrochloric acid to digest the protein. When meat is intermixed with bread, the acid secretions required for proteins are released in the stomach suspending starch digestion. With the digestion of carbohydrates suspended, bacterial breakdown follows, and toxic byproducts result. Therefore, eat protein foods and carbohydrate foods at separate meals.3

Conversion of protein to amino acids follows a sequence of specific enzymatic reactions. First, pepsin converts protein to peptones after which the peptones are acted upon by erepsin to produce amino acids. Literature validates that digestive secretions are timed. When milk and flesh products are intermixed, the strongest digestive juices are poured out in the last hour for milk and the first hour for flesh. Additional problems occur when milk is mixed with any food. Milk turns to curds as it enters the stomach. Curds engulf other food particles in the stomach inhibiting their digestion. The fat in the curd inhibits pepsin from being secreted. In the absence of pepsin, bacteria will activate putrefaction of proteins. Specifically, flesh and eggs; flesh and nuts; flesh and cheese; eggs and milk; eggs and nuts; cheese and nuts; milk and nuts, and the like should not occur. Therefore eat one concentrated source of protein at a meal.3

Acids inhibit the outpouring of gastric juice.  Even though the digestion of protein occurs in an acid environment, other acids, for example, from fruits will inhibit the gastric secretions and in turn limit or destroy the release of pepsin.  Acid end products of fermentation also affect the release of gastric juice.  Also, salad dressings that contain lemon juice or vinegar inhibit the secretion of hydrochloric acid.  Under these conditions, bacteria will activate putrefaction.

Additionally, pepsin acts only in an acid medium. Pepsin is destroyed in an alkaline environment, by alcohol, and retarded in low-temperature environments (as with iced drinks on top of a meal). In the absence of enzymes, putrefaction of proteins occurs with subsequent formation of toxins, rather than conversion to amino acids. An end product of putrefaction, ethionine, is a confirmed animal carcinogen. Eat proteins and acids at separate meals. 4

Fats will inhibit the secretion of gastric juice. Also, fat lowers the amount of pepsin and hydrochloric acid in gastric juice. Creams, butter, oils should not be mixed with nuts, eggs, or fish. If these conditions occur, bacteria will activate putrefaction. Therefore fats and proteins should be eaten at separate meals.4

Sugars undergo their digestion in the small intestine, not in the mouth or stomach. When mixed with other foods they are held in the stomach until the digestion of the other foods occur. Under the conditions of warmth and moisture of the gut these sugars will ferment rapidly.  Acids from fermentation will inhibit the gastric secretions necessary for protein digestion. These conditions cause the suspension of digestion with subsequent toxins forming during fermentation of sugars and putrefaction of proteins.  Therefore eat protein and sugars at separate meals.4

Again, sugars are held in the stomach awaiting the digestion of starches. The consequent acid environment from the fermentation of sugars will halt the digestion of starches. Toxins can form from the byproducts of these food groups. This is evidenced by most of America’s breakfasts leading to a sour stomach and eructation. An additional complication can occur when sugars are eaten with starches. Sugars cause the secretion of saliva devoid of ptyalin. Consequently starch with sugar may prevent the adaptation of saliva with starch, i.e., little or no ptyalin being secreted.  Therefore eat starches and sugars at separate meals.4

Principles of Food Combining in Practice

In summary, performance gauged by strength and endurance originates at the cellular level where nutrients from proper digestion are to prevail. Unfortunately, diet wellness programs are absent the following facts:

Indigestion may cause bacteria to activate fermentation of sugars and starches and putrefaction of proteins. The end products of fermentation and putrefaction are toxins. If toxins predominate in the media surrounding our cells, then cellular death ensues with the immediate effect exhibited by poor performance in any activity.

Pavlov was awarded the Nobel prize for digestive secretions supports the idea that digestive enzymes can be neutralized by food combinations.

In effect, I am suggesting that the timing of digesting certain foods as well as the combination of same should be considered.  You be the judge as your laboratory to prove/disprove the concepts provided is your stomach; and, catarrh can be assessed by a certified Iridologist.