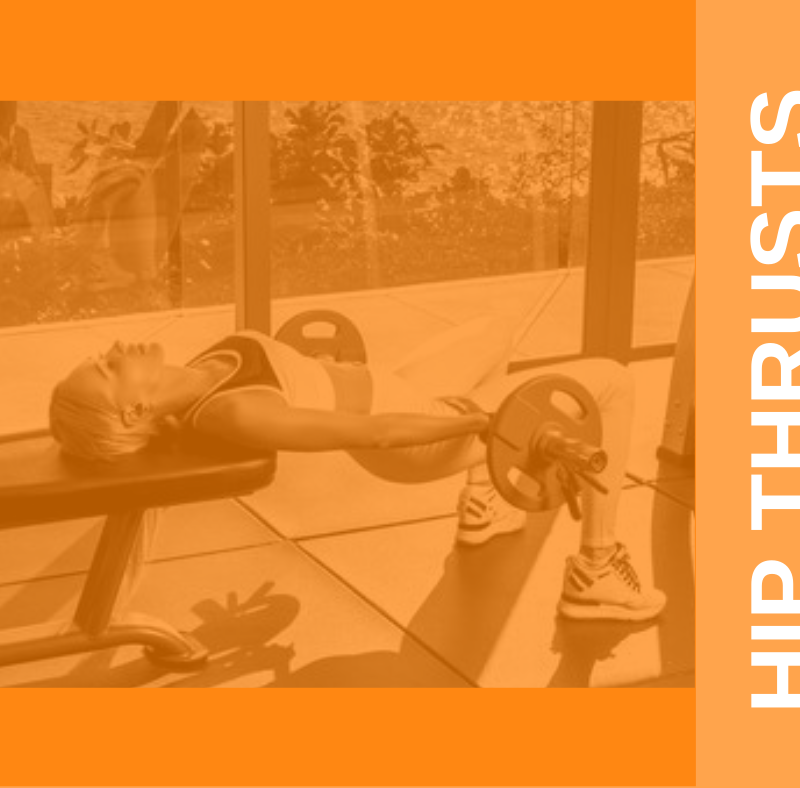 It has been said that the universal quest for stronger, plumper booties is here to stay. Whether it is for aesthetic or for performance reasons, glute enhancement goals reach far and wide in the field of fitness, and hip thrusts have taken the spotlight to help achieve those goals.

How to Achieve a Great Posterior

Glute gains can be achieved by a wide variety of movements such as squats, split squats, rear foot elevated split squats, and as we’ve discussed in recent months, hip bridges and glute bridges.

It is true that well-rounded programming is crucial for best results, but proponents of hip thrusts would argue that this exercise is of paramount importance for glute growth goals.

Suffice it to say, once clients have mastered glute bridges and their progressive variations, it might just be time to up the ante and introduce the hip thrust.

The versatility coupled with regressive and progressive patterns of bridges is not only ideal for clients working with limited range of motion (ROM), but also muscle imbalances.

While recently listening to an episode of the Mind Pump Podcast, an excellent question was posed by a listener: “How can someone who tends to be more quad dominant see higher glute gains?”

As someone who also feels more quad activation from back squatting, my ears were tuned in, anticipating that hip thrusts would be among the exercise suggestions. Sure enough, they were.

What Are Hip Thrusts?

Simply put, hip thrusts are glute bridges where the upper back is supported on an elevated surface, and the hips are loaded with a barbell which itself is usually loaded with weight.

Personally, I began adding hip thrusts more regularly after listening to an episode of All About Fitness where host Pete McCall interviewed the man who is often dubbed the founding father of this movement: Bret Contreras.

Contreras began by conducting an experiment on hip thrusts for his 2015 Ph.D dissertation and has since popularized the exercise with further experimentation and data on its benefits.

In particular, Contreras has explored muscle activation of the gluteus maximus, biceps femoris, and vastus lateralis, and has made some interesting comparisons discussing strength vs. hypertrophic gains in a five-part series of the hip thrust vs. back squats.

While Contreras firmly admits that both movements have their specific benefits, in one of his research endeavors testing 10RM over a six week period, it was revealed that squats produced 20% upper glute and 21% lower glute growth gains compared to hip thrusts which resulted in 28% growth gain in both the upper and the lower glutes.

Now, I know what you’re thinking: glute strength doesn’t necessarily equate to the desired hypertrophic effects of the bootylicious look, but as trainers, this is where we get creative with periodization, volume, and time under tension and cleverly balance your program design to included strength, hypertrophy, and even power and endurance.

It is also worth noting that data suggests that hip thrusts have a positive impact on power production. In the same study mentioned above, evidence showed that squats improved horizontal push force by 20% compared to 32% in the hip thrust.

Generally, lower body push production takes place vertically, but is not optimally trained for strength in this position; horizontal power production increases can be especially beneficial for sprinting, jumping, and lateral speed movements.

Sold! How Does this Work?

What do I do with my arms?

How do I correct my form when my knees tend to cave in?

How do I prevent pain from the barbell on my hips?

What if at the bottom of the movement, my butt doesn’t come back down to the floor?

How do I keep the bench from sliding away?

While I am a fan of integrating the hip thrust for clients seeking glute gains, I feel compelled to reiterate that clients should incorporate a variety of hip hinge movements in their sessions, such as deadlifts, kettlebell swings, and good mornings. If there is a concern for quad dominance in other movements such as squatting, I’d suggest adequately priming the glutes in the warm-up.