Both compound- and single-joint exercises have their merits. When designing a fitness program, the key is to know when and how to use them.

Compound exercises are multi-joint movements that work several muscles or muscle groups at a time. Compound movements account for the majority of those used in the course of everyday living, and are therefore of great use in designing programs for functional fitness. For apparently healthy individuals who are trying to get the most benefit from a training program, compound exercises are generally preferred and recommended for a number of reasons.

Because compound movements inherently involve several muscle groups, they burn a greater number of calories. They lead to improved joint stability and muscle balance across a joint, decrease the risk of injury during activities such as sports, and can be performed longer with comparatively less muscle fatigue. 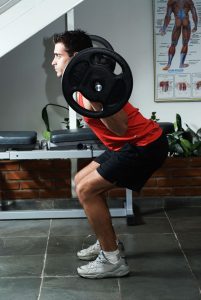 Compound movements that are extremely heavy are often said to have the greatest degree of leverage. When the goal is to optimize gains in both size and strength — and when possible — they are advocated in preference to simple, single-joint movements

Single-joint exercises, as the name suggests, involve a single joint, such as when performing a bicep curl. They can be useful when returning to training after a long break away and they can strengthen areas of the body that might have been debilitated due to illness, injury, or surgery. These exercises burn comparatively fewer calories than compound exercises and if taken to extremes, can lead to muscular imbalances that can increase the risk of injury as well as an unbalanced physique.

When combining workouts, it is advisable to perform compound movements before single-joint exercises. This is because compound movements, due to the involvement of a greater number of muscle groups, are typically harder and require more exertion than single-joint movements. Think of it this way: Would you really want to tire out your calf muscles with heel raises just prior to doing some squats?

The Fallacy of Isolation

Although it might seem like a matter of semantics, it is worth clarifying the distinction for an inquisitive client that the term “single-joint exercise”, which is sometimes used interchangeably with the term “isolation exercise”, should not be confused. The latter, in fact, is an anatomical impossibility with respect to how muscles are worked in resistance training. That is, one muscle cannot function on its own: There are always at least two muscle groups involved in every movement, an extensor muscle, which increases (or ‘opens’) the angle between the two bones and a flexor muscle, which does the opposite.

So putting it all together, when it comes to getting the most from a workout, it’s often best to perform more compound movements and to do them early on in the session.

About the Author: NFPT Team