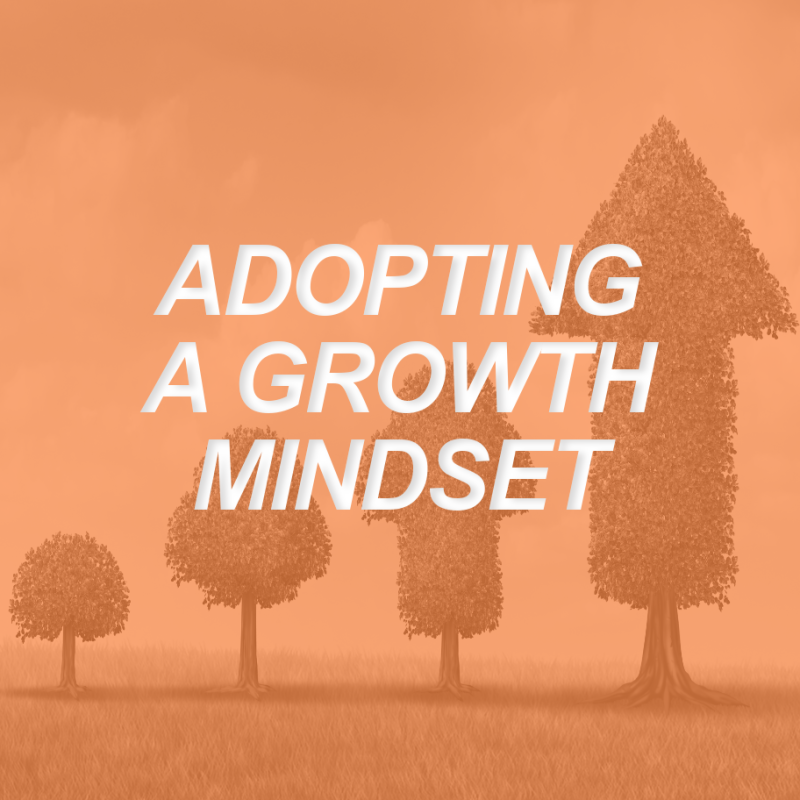 Most trainers have encountered a client who outwardly appeared to have all the ability and desire needed to achieve their personal goals and aspirations, yet didn’t live up to the expected level. There are numerous reasons for coming up short: improper diet, inadequate rest and recovery, wavering commitment, and so forth. One explanation that some trainers may not have previously had much exposure to is the influence of mindset. Let’s explore how fitness and health success can be bolstered by helping clients adopt a growth mindset.

Humans are extremely self-reflective. Every individual has moments where their inner thoughts are self-critical, negative, or anxious in the face of adversity. Similarly, every person has occasions where they embrace challenges, persist despite setbacks, and put in concentrated effort to overcome obstacles. The ways in which we process and react to difficult situations are guided by our methods of thinking, or in another word, our mindsets.

A mindset is the collection of attitudes or beliefs an individual holds.

Research primarily led by Stanford University Psychologist Carol Dweck has thoroughly explored the role that mindsets play in realizing long-term success, both in sport and general life. Through the course of her work, Professor Dweck proposed and refined a continuum that describes two divergent manners of thinking that can increase the likelihood of achieving great success or lead away from positive outcomes. The opposite ends of the spectrum are termed as “Fixed” and “Growth”.

An individual with a fixed mindset believes that intelligence and/or talent is static or unchangeable. People who hold these views do not believe practice will change their innate abilities, so they have a deep desire to appear smart or skillful from the get-go in a relevant activity. As such, fixed mindset individuals tend to avoid difficult challenges, become defensive or give up quickly when faced with obstacles, see effort as unnecessary, disregard constructive criticism, and can even feel threatened by the achievements of others.

One might imagine how any of these behaviors could be potentially damaging to long-term success. Undertakings worth accomplishing typically require overcoming arduous obstacles, learning from mistakes, accepting feedback, as well as working closely alongside others for mutual benefit.

An example of a fixed mindset behavior in practice could be a work supervisor who ignores business process suggestions from their subordinates because “they know what works best”. Another instance could be a child’s hesitancy to try out a new activity, as they worry about embarrassing themselves in front of their peers by not being an expert from the start.

On the other side of the spectrum, the growth mindset centers around the belief that personal characteristics are modifiable. Hence, the core difference between the two ends of the continuum lies in the belief in the permanence of talent, intelligence, and ability – not their overall levels of presence.

Growth mindset behaviors include a desire for learning and improvement, the embrace of challenge, persistence in the face of setbacks, seeing effort as a path to mastery, seeking out criticism, and finding inspiration from the successes of others (Dweck, Carol 4). These actions are logical, as a person will be more likely to give effort towards a goal or repeatedly try to achieve an objective if they believe such endeavors will increase their aptitude at that task.

As mindset is a spectrum, every individual holds both fixed and growth beliefs and engages in both types of behaviors at times. What has been repeatedly proven through research though, is that growth mindset individuals are far more likely to become high achievers or elite performers (Dweck, Carol S. 4-5). This echoes studies by scientists such as Anders Ericsson – who is best known for his work on the so-called “10,000-hour rule” – that concentrated practice leads to excellence.

The path to bettering oneself lies in recognizing one’s own thoughts and actions. If you can understand your own methods of thought, you can work to change your mindsets. As mindsets are just collections of beliefs, they can certainly be shifted over time. Further, such transformations in beliefs can help lead to the modification of behaviors.

The sample survey presented below can be used as an assessment tool for evaluating where on the spectrum of a growth versus fixed mindset an individual currently falls. The first page presents the actual survey questions, while the second page provides the scoring information.

Once you know where an individual falls on the spectrum, focus on specifically addressing areas of fixed beliefs and encourage a shift towards (positive) growth attitudes.

Ultimately, promoting a growth mindset in clients alone is not enough though. As a trainer or coach, regular interactions with clients will reveal aspects of your own mindset.

Carol Dweck writes, “What [athletes] believed about their coaches’ values was even more important. The athletes who believe that their coaches prized effort and practice over natural ability were even more likely to have a superior season” (Dweck, Carol S. 6). Therefore, it is imperative that trainers work to adopt a growth mindset themselves if they wish to best promote it with their clients. 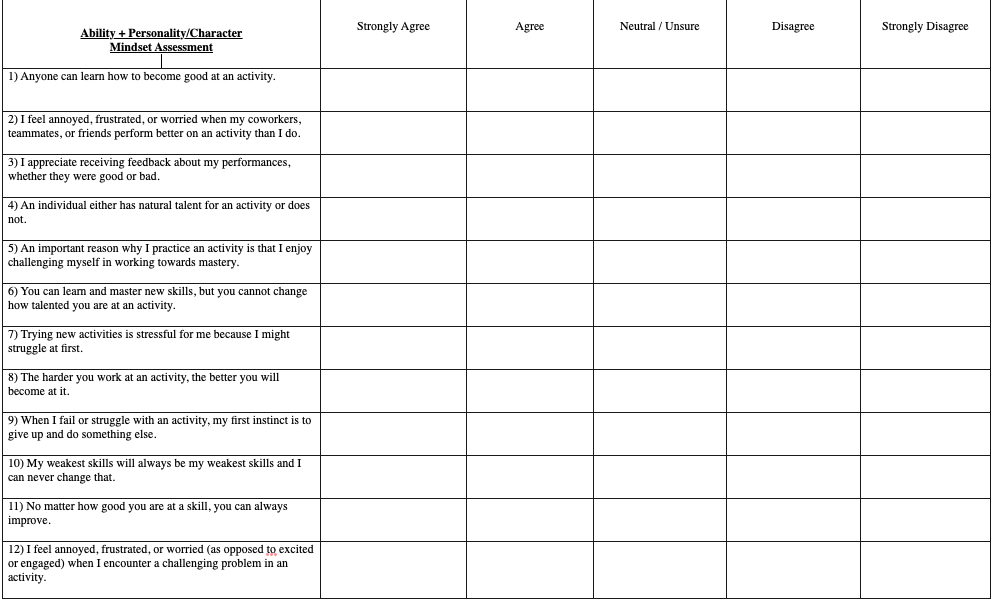 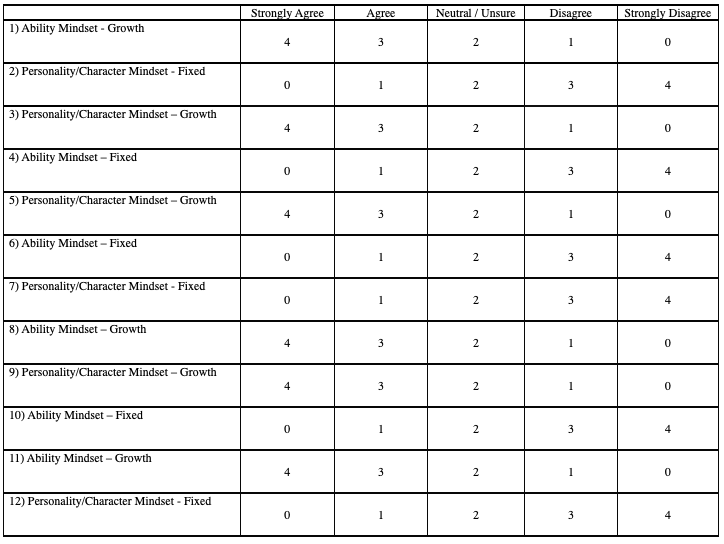 The power of believing that you can improve | Carol Dweck, 2014 Ted Talk

Dweck, Carol. Mindset: How You Can Fulfill Your Potential. Robinson Publishing, 2012.

An NFPT Certified Personal Trainer, Andrew is also a lifelong swimmer, with coaching experience in the sport that spans the gambit of children learning to swim, to developing adolescents, to NCAA champions. He has personally achieved multiple U.S. Master’s Swimming Top-10 accolades, and he has given educational presentations at elite swim camps across the country. Andrew will be pursuing a Masters of Public Health degree in Health Behavior & Health Education at the University of Michigan beginning in the Fall of 2022.