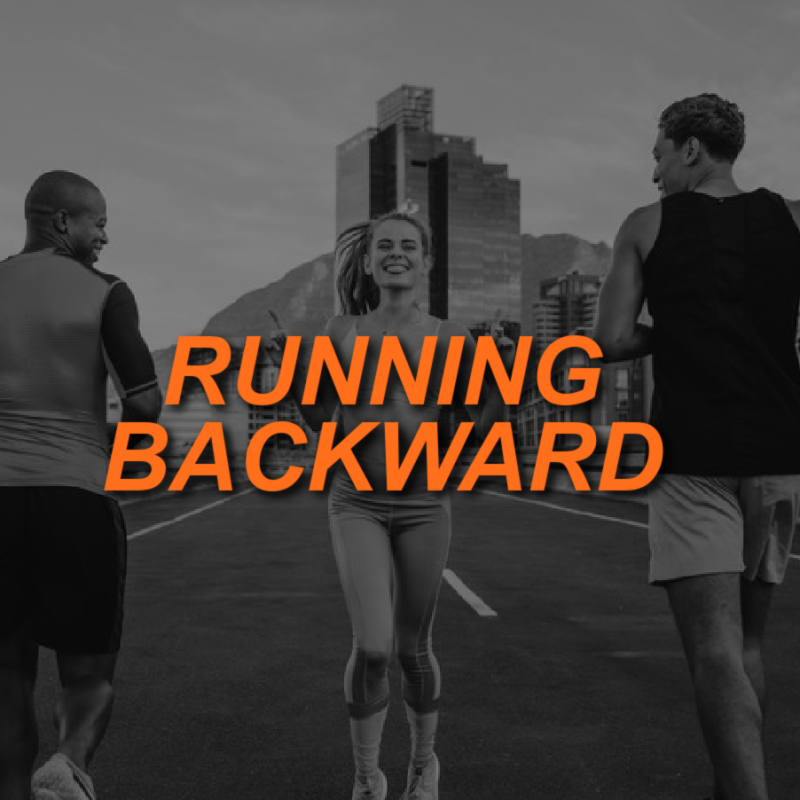 Clients who incorporate running into their workout programs may get burned out from the sheer monotony. Retro-running, or running backward, can interject some variety, whether clients are prepping for a marathon or just running the treadmill for cardiovascular health. Read on to discover the hidden benefits of moving in reverse!

Force and Form of Running

Endurance athletes characterize traditional running as a combination of the force exerted after “hard landing” when muscle–tendon units are lengthened, and a lesser force exerted before “soft takeoff” when they shorten. In retro-running (moving backward), the landing–takeoff process gets reversed, resulting in a reduction of output efficiency.

According to a 2011 study, running backward forces the body to expend ~30% more energy than conventional forward form. In this regard, retro-running mimics the workload expended while running up and down hills, or performing wind sprints. Some athletes have likened running backward for just a single lap around a track to what the body experiences while running 8 forward-facing laps. Trainers and coaches might choose to capitalize on this considerable difference in energy expenditure when preparing clients for running events, given that the backward movement renders it an excellent component of moderate interval training.

Getting Started with Running Backward

Some clients might express initial unease at the thought of moving backward as a means of exercise. Prior to embarking on a backward treadmill journey, remind your client of the following tips to ensure a positive, safe experience:

Giving the client at least one minute at each treadmill speed before increasing to the next enables the body to fully adjust before boosting the intensity and/or asking it to go even faster. As a matter of safety, do not increase both speed and time intervals simultaneously. Just like in any science experiment, varying too many variables at the same time eliminates the opportunity to discern which aspect needs more attention before moving on to the next level.

Walking /running backward on the treadmill facilitates improvements in balance while training lower-limb muscle tissue in a vastly different manner than that achieved with forward movement. Athletes often notice that they can transition from moving in one direction to another with greater ease, owing in part to a diminished workload on the knees.

Still, clients often cite balance as their greatest challenge in retro-running. By way of introducing this protocol as an interval training tool, until the client feels fully in command of his space and balance, seasoned running coaches recommend the introduction of one, or perhaps two at most, 30-second intervals spaced evenly throughout a routine run. Adding inclines to the client’s workout should only come after a great deal of practice on a level surface.

If a client prefers to run outdoors, suggest he keep in mind the visual disadvantage of backward running – not seeing the path or other runners. For this reason, trainers might advise looking for a fairly empty track when clients first embark on this challenge. More experienced retro-runners sometimes opt for clipping a mirror to their sunglasses, enabling them to see – and therefore plan how to move around – oncoming forward-facing runners.

Backward running offers many advantages besides merely spicing up a client’s training protocol. The unique challenges placed upon the body serve to improve hip mobility and posture; calf and quad muscles also benefit greatly. We know that the conventional forward running motion can potentially overdevelop the hamstrings, paving the way for knee injuries. Including occasional bouts of backward running can rectify (or at least compensate for) muscular imbalances while also helping to realign the spine.

Data suggests that for an individual undergoing rehabilitation, either from a stroke or athletic injury to the legs, continuing to exercise using backward walking/running at an intensity sufficient enough to maintain cardiovascular fitness levels proves relatively safe, until the client receives clearance to resume his former level of exercise.

Scientists who studied a group of 26 female athletes discovered an advantageous caloric burn while running backward. Subjects who engaged in 6 weeks of retro-running, 3x/week for 15 to 45 minutes, saw a 2.4% decrease in body fat. We can expect this type of result when taking into consideration the additional 30% expenditure in workload referenced earlier.

With so many advantages to tap, consider adding backward running to your clients’ traditional workouts. Try including the element for about 4-6 weeks, then assess for any changes in speed/muscle development/balance. You might just find that backward training can propel your athletic client forward in a very positive direction!