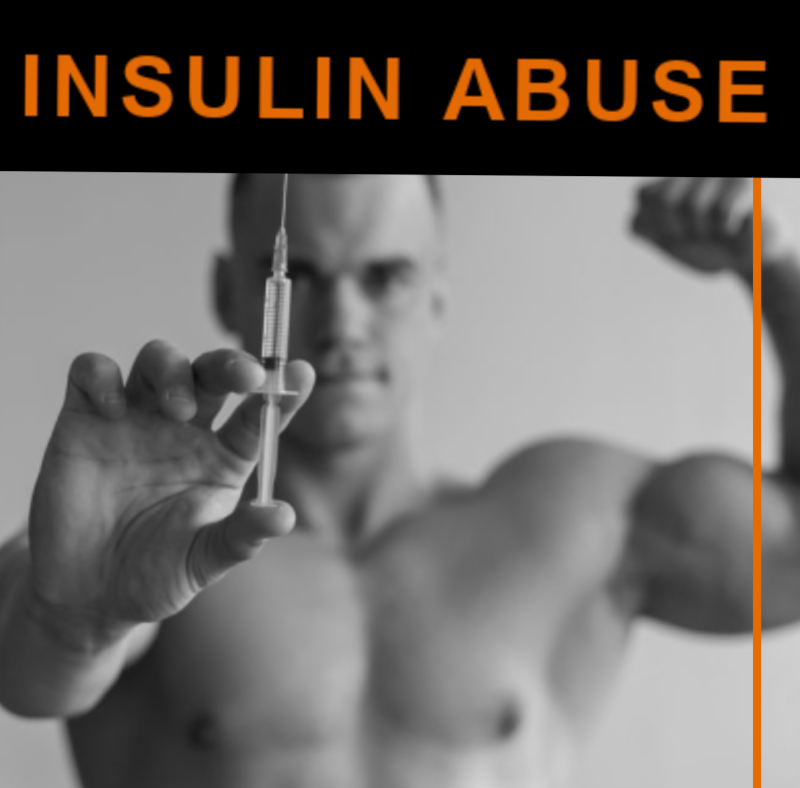 Insulin, the hormone widely recognized for its role in regulating blood glucose levels in the body, serves as a lifeline for many diabetics. Insulin abuse is the latest deadly trend among elite athletes and bodybuilders seeking to boost muscle growth and endurance. An estimated 25% of steroid abusers also take supplemental insulin. But, is the risk worth the reward?

When glucose levels rise after eating, the pancreas releases insulin in order to drive glucose into the liver, muscles, and fat cells where it can then be utilized for energy. Generally, high insulin levels cause a decrease in muscle and fat breakdown and a corresponding increase in muscle building and fat storage. Classified as an anabolic hormone, the role of insulin in hypertrophy continues to pique the interest of scientists and researchers worldwide.

In order to maximize the body’s natural insulin response, proper nutrient consumption both before and after strength training must always remain an athlete’s priority. Ingesting a combination of protein and carbohydrates 30-60 minutes prior to weightlifting not only provides necessary fuel for the task ahead, but also releases insulin, which decreases catabolism and prevents muscle breakdown.

Gym aficionados know that growth does not occur during the workout, but during rest and recovery time – and meal time — outside of the gym. When food gets consumed/digested, insulin gets released. In its absence, muscle tissue ceases to grow. While my own competition coach frequently reminded me that bodybuilding progress lies less in the gym and much more in the kitchen, the implication translates to insulin as the single most important hormone for muscle building.

In addition to planning meals around workouts, some competitive bodybuilders opt to push beyond the boundaries of what the body can do on its own and inject supplemental insulin to accelerate muscle anabolism. “Insulin is widely used for its anabolic properties that, like steroids, aid in muscle growth,” says Dr. Harrison Pope, M.D., a psychiatry professor at Harvard Medical School who conducts extensive research on substance abuse amongst bodybuilders. Insulin does not trigger the negative side effects which accompany the use of many steroids, such as testicle shrinkage or gynecomastia, but still possesses potentially life-threatening capabilities.

The British Journal of Sports Medicine cited one such case. “[Insulin abuse] has serious consequences should things go wrong, particularly as it is usually used in secret without even the knowledge of loved ones,” the scientists write. “This puts the user at risk of developing [very low blood sugar] for prolonged periods away from possible medical assistance, potentially resulting in coma and death.”

Even though we know insulin works to lower blood sugar and presumably make that glucose accessible to muscles, for usage, how certain are we that injecting it into a non-diabetic will even produce the desired result? According to a study published in 2015 in the Journal of European Endocrinology, taking a normal therapeutic dose of insulin (similar to that prescribed for a chronic diabetic) does not result in hypertrophy when amino acids are present in the body. In other words, simply taking a BCAA supplement or drinking a protein shake before a workout will stimulate muscle synthesis, even in the absence of additional insulin.

This same study looked at the amount of insulin necessary to trigger significant growth in muscle mass. This value, approximately 50 units per day, far exceeds what the human body could every generate naturally. Considering that a typical therapeutic insulin dose for diabetic individuals hovers roughly around 10 units per day, we can easily understand how injecting 50 units of insulin risks inducing hypoglycemia, coma, or death.

The Danger of Elevated Glucose

Among the considerable negatives of high blood sugar as it relates to bodybuilding, nerve damage ranks as the number one concern. High blood sugar destroys nerves, a commonly reported complaint among individuals with uncontrolled diabetes. Shrunken limb muscles often result from this damage. Intestines too can suffer, losing the ability to properly and effectively contract. Severe digestive issues ensue, as moving waste through the bowels slows and often stops altogether.

Dextrose, a simple sugar, has a chemical structure identical to that of glucose. The name “dextrose” simply refers to glucose derived from corn. As we know, glucose serves as an energy source for many life forms. Upon consumption of carbohydrates, the body metabolizes them into glucose molecules that get transported to cells for the production of energy in the form of ATP. Many high-level athletes use dextrose for bodybuilding purposes. Categorized as a high glycemic carbohydrate source, the rapid increase of insulin it elicits helps push amino acids and other nutrients into muscle tissue following an intense training session. This provides a safer, easier and more natural alternative to injecting mega-doses of pure insulin.

While athletes view dextrose for bodybuilding as beneficial in many ways, an upper limit does exist in terms of how much a body can utilize for building lean mass at any given time. At four calories per gram of both protein and carbohydrates, a post-workout shake containing 30 grams of protein plus 100 g of dextrose packs a significant punch of 520 calories!  Classified as a storage hormone, chronically elevated insulin levels can easily lead to excessive gain/storage of adipose tissue.

For the vast majority of gym-goers with fat loss as the main goal, the need for dextrose post-workout diminishes. While insulin is a great hormone for protecting lean muscle mass from catabolism, it also directly antagonizes fat-burning pathways in the body. A more prudent choice for fat loss while still upholding the goal of lean muscle mass gains comes in the form of BCAA’s before, during, and/or after training, in lieu of dextrose. The insulin response from BCAAs will not significantly alter fat-burning capabilities. They can therefore help protect hard-earned muscle tissue while not contributing to high caloric excess.

For clients seeking an extra edge in achieving muscularity, your knowledge of the upside as well as the perils of exogenous insulin supplementation can help them understand the body’s ability to add lean muscle mass. Always err on the side of caution! Offer your clients information on BCAA’s and the timing of nutrient intake both pre-and post-workout.