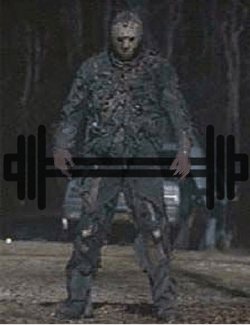 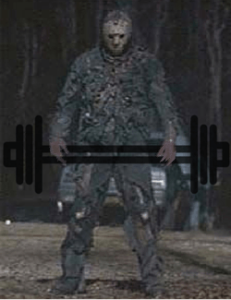 The 6’5″ 303 pound Jason Vorhees is not a small guy. He of course was much smaller when, at the age of 11, little Vorhees met his demise. In case you haven’t seen the movie in awhile, he drowned in Crystal Lake – or did he?? As the movie franchise grew, so did Jason. In Friday the 13th: Part I, he was barely 6 feet tall, but the more undead he got, the taller and broader he got too. Jason got gains. #gainz

Well yeah! He has to. It’s not easy slaughtering 167 unsuspecting campers over the course of 12 movies, you gotta bulk up for that! Jason is a Ballistics Training kind of dead guy. He lifts, accelerates through the movement and throws his victims – it’s the Vorhees powerlifting routine, Deadlifts only – mwwaahhahaha! Now if we want to get serious about this, Jason should note that, even though fast muscle contractions will result in the development of power, it is the slower contractile speeds that will result in his size and strength increase. So if Jason wants to be bigger and stronger for Friday the 13th: Part 13, he better do more than Ballistics training, ’cause that alone won’t do it. The duration of the stimulus is too brief to produce tissue damage that is sufficient enough to require repair and growth – duh Jason!

Jason needs a more robust training program. Maybe, instead of just creepily making his way out of Crystal Lake, he should swim a few laps around it first.

Yeah Jason doesn’t need cardio, he’s got that uncanny ability to give ‘chase’ without breaking a sweat – oh, that’s right, because he’s dead and this whole thing isn’t real! However, if you’re afraid of hockey masks and you’re spending anytime at Camp Crystal Lake next summer, then you better start working on your own cardio! For every day for a couple months before your on a camping adventure from hell, do some low intensity, long duration fast walks for about 40-45 minutes. A fast walk would work (because he moves at about turtle speed) and forget the duration in terms of distance, you could run in a circle, won’t matter because he’s gonna catch up to you no matter how far you go, just sayin. But hey, at least with a consistent workout of low intensity, long duration cardio, you’re going to lose some pounds and look hot in your bikini (or speedo, whichever), and you’ll be able to run through the woods screaming for your life, for a very long time – then you trip, fall and it’s over.

So you’re thinking, ‘Seriously?? There’s a lesson?’ Yes, there is, more than one in fact!

Lesson #1: Building strong muscles is an asset to anyone whether an athlete or someone seeking general functional fitness. The Jason Vorhees style of fitness is totally functional. He’s working out in order to better perform Activities of Daily Living (ADLs), or, in his case, Activities of Daily Killing (ADKs)…either way, totally functional. Keep in mind, there are varying strength demands in any sport or physical activity, including impaling sexually active campers. The greater the strength requirement in the respective activity, the more strength training should be highlighted in the fitness program. So if Jason Vorhees was your client, you should assess for his 1RM and maybe throw some power cleans into his program (but consider asking him to use a barbell and weights instead of the girl who can’t run that fast).

Lesson #2: Don’t be stupid. Don’t camp. Tie your shoes. Oh, and talk to your teenagers, especially if they’re attractive football playing or cheerleading prep team kids that don’t want to die in a cabin. You should already be warning them about the dangers of casual sex, drinking and drug use…but they should know that when you mix these things with a camping adventure near an eerie lake, well, you’re just askin for it!

So, for tonight, will it be Night at the Museum, or Night of the Living Dead?? #funwithfitness #fitnessfunning

Don’t forget to look behind you!

[info type=”facebook”]Got a spooky workout to share? If you’re an NFPT trainer, join the Facebook Community Group to chat with other trainers. If you’re not, come talk with NFPT here, we would like to meet you.[/info]