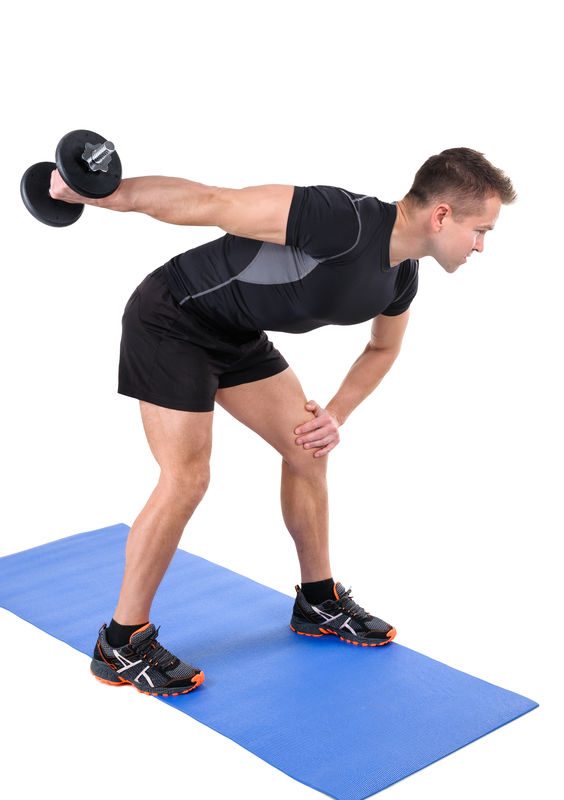 The terms active and passive insufficiency are buzz words in the fitness world as of late and for good reason: understanding the implications will help every trainer program exercises that are more efficient and less injurious.

Both active and passive insufficiency are functional states that occur in multi-joint muscles only.

Think about which muscles these are first to fully grasp the concepts, namely: the hamstrings, the biceps, the triceps, the digital flexors and extensors, the gastrocnemius.

Active insufficiency occurs when a multi-joint muscle shortens over BOTH joints simultaneously, and hence, creates so much slack, that muscle tension is almost completely lost.

Think about when you flex your knee and then attempt to extend your hip. Since the hamstring muscles cross both the hip and the knee, when you try to get the leg further behind you (hip extension) with a bent knee (knee flexion), the hamstrings shorten to such a degree that they fail to contract anymore.

This weakened position will become apparent when attempting to do a stability ball “hamstring curl” with hips fully extended (butt squeezed tightly as possible). While this will allow more concentration on gluteal contraction, it is a poorer hamstring exercise than a curl with hips slightly flexed.

You can test out this concept yourself by flexing your knee as much as you can and then attempting to fully extend the hip. You’ll get stuck! If the woman in the picture above were to release her foot, her leg would not be able to remain in the position.

Conversely, if you straighten (extend) your knee while your hip is extended, you’ll find that the leg will move farther behind you, (ie, the hip extends fully) as the hamstrings regain more tension with a straight knee.

How to Avoid Active Insufficiency in Exercise

Compound exercises by their nature will recruit muscles in a more natural and efficient manner. Isolation exercises, while holding importance for goals like bodybuilding and targeting weakened muscles, may not always be a great choice for a strength, general fitness, or weight-loss clients.

Stability Ball Leg Curl: By thrusting hips as high as possible placing the hips in full extension THEN curling the ball in, the hamstrings will be weak and may cramp up.

Better: Keeping the hips slightly flexed. To make it more difficult, do one leg at a time.

Upright Seated Leg Extension: The rectus femoris crosses the knee and hip joints. A seated leg extension that has the hip at maximal flexion (very upright) will reduce tension on the rectus femoris when the knee is fully extended.

Better: A slightly reclined leg extension so the hip is not completely flexed.

Better yet: A barbell squat.

“Preacher” Bicep Curl: The bicep muscles cross both the shoulder and elbow joints. The shoulder is flexed to 90 degrees at the start position of a preacher curl. When the elbow flexes fully, the bicep will become actively insufficient, creating a loss of tension.

Better: A seated curl, with the shoulder joint in a slightly extended (behind the torso) position. A steep reclined position will place the bicep into passive insufficiency so don’t lean back too far.

Better yet: A cable row.

Tricep Kickback: The long head of the tricep crosses the shoulder and elbow joints. The kickback exercise is intended to target the medial head and lateral head, but may be injurious to the long head.

Better: Skullcrushers, or lying tricep extensions, which place the shoulder in 90 degrees flexion.

Seated Calf Raise: The gastrocnemius crosses both the ankle and the knee joints. The soleus crosses only the ankle joints, and bodybuilders often attempt to target the soleus with seated calf raises. With the knee flexed in a seated position and the ankle plantarflexed, the gastrocnemius is shortened completely, placing tension on the soleus only. This, however, may potentially strain the gastroc if the load and volume is too great.

Better: A standing calf raise that will hit both gastroc and soleus simultaneously.

Better yet: A squat with adequate dorsiflexion (and barefoot with an activated short foot).

Forearm Curl: The digital flexors cross the knuckles and the wrist joint. With fingers fully flexed, attempting to “curl” or flex the wrist is almost impossible due to the loss of tension.

Better: Limiting the range of motion (ROM) of the wrist curl by starting in a flexed wrist position and moving into neutral, but not beyond. Another alternative is to attempt to move weight with an open palm instead of a clenched fist.

Better yet: Pull-ups or deadlifts. Both will improve grip strength.

Passive insufficiency occurs when the multi-joint muscle is lengthened to its fullest extent at both joints, but also preventing the full ROM of each joint it crosses. This is generally less likely to be as problematic as active insufficiency.

But, taking the example of the hamstring complex, passive insufficiency can be quite an impediment if the muscles are short and tight instead of optimal length. When the knee is fully extended, it’s much harder for the hip to fully flex (as in a full forward bend). Bend your knees a bit and you will find the hips are freed up to flex a bit more.

When considering sports activities like sprinting or kicking a ball, passive insufficiency of the hamstring complex can cause injury.

Other exercise scenarios where passive insufficiency is a limiting factor:

Overhead Triceps Extension: With shoulders and elbows fully flexed at the start position of an overhead extension, the long head of the tricep, (the only tricep head that crosses the shoulder and the elbow), becomes fully taut leaving the short head and the lateral head to move the weight.

“Donkey” Calf Raises: This exercise involves hip flexion and knee extension while executing a heel raise. This movement is intended to increase calf size but actually places the gastroc under maximal tension, reducing force output. You will not be able to handle as much weight as a standing calf raise. One option is to bend the knees just a bit instead of locking them out.

The above recommendations are not hard and fast rules, but understanding these two terms can help trainers better evaluate their clients’ hindrances and progress with regard to efficient movement. If a client seems to consistently struggle with particular movements you can determine if active or passive insufficiency is playing a role and adjust accordingly. Questioning and re-evaluating your approach to programming can only improve client goal achievement and outcomes.