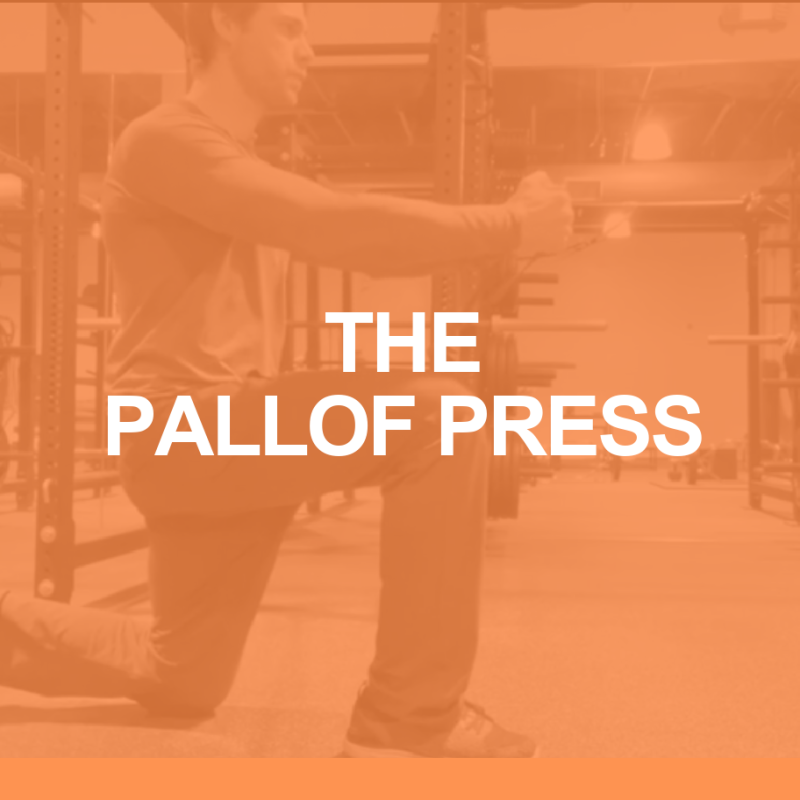 I’ve found that the exercises that look the least complicated are typically the best for you. At first glance, the Pallof Press would certainly fit that description. There’s very little movement to it, which is what makes the exercise feel much harder than it looks; you have to resist movement in order to effectively train your core.

The Pallof Press is an anti-rotational core exercise, which means it trains the muscles along the spine in order to prevent movement (unlike crunches and Russian twists that create movement at the spine). Training with exercises like Pallof Presses is not only efficient in creating optimal core and spinal bracing from unwanted movement, but it can assist with injury prevention and decrease energy leaks, enabling better performance in multijoint exercises such as deadlifts and chin-ups.

How the Palloff Press Works

In the case of the Pallof Press, the end range of motion gets the greatest challenge forcing your body to meet the demands of staying tight and locked down. The tension of the band pulls you towards the anchoring point while your job is to resist that rotation, maintaining a tall upright posture without compensations from arching your back or shrugging your shoulders.

Muscles Worked in the Pallof Press

How To Do The Pallof Press (Half Kneeling Position)

1. Set up to the side of the band that you have anchored. The level of difficulty is based on both resistance of the band and the distance away from the anchor (the further away the harder it gets).

2. Establish a half-kneeling position with the open side closest to the band.

3. Grab the band with the closest hand first with outside hand on top at upper stomach level.

4. While engaging your glutes, staying tall, and keeping your shoulders down and back, press the band out and away from your upper stomach to full extension of the arms.

5. Hold for five seconds with arms fully extended and return back to starting position.

** The band should move in a straight line with no side-to-side (lateral) movement.

The position in which you perform this exercise also will dictate the level of intensity that you get from this movement. I always like to start clients off with the half-kneeling position since it has fewer moving parts and is easier to get the right feel to ensure you get the benefits from the exercise. Proper form and a focus on tension are a must. When you are observing your clients perform the exercise, pay attention to what it should look like which should look effortless and not complicated. Remember the exercises that look the simplest or most basic are typically the best to master.