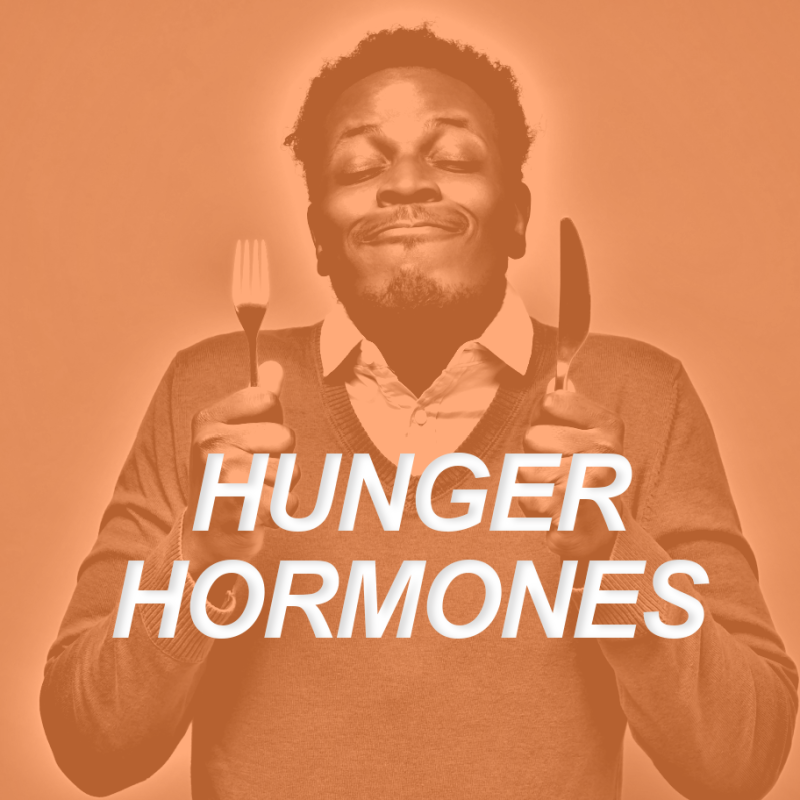 Research shows that a significant percentage of dieters regain most, if not all, of the weight they shed within a year’s time. Increased appetite/loss of willpower top of the list of common reasons. Another variable to consider is the impact of hunger hormones. The hormone ghrelin, might actually encourage one’s body to regain lost weight as fat. To help clients who face this dilemma after months of successful weight loss, read on and learn about the hormones responsible for hunger and satiety, and how they can easily turn against a serious dieter.

The control of energy balance within the human body largely rests on two key hormones, leptin and ghrelin. Leptin, produced by adipose tissue, mediates satiety/appetite and long-term regulation of energy balance. This hunger hormone works to suppress food intake, letting the body know enough fuel has been ingested, and to begin the fat-burning creation of energy. This in turn kickstarts the weight loss process.

Ghrelin, a faster-acting hunger hormone released by an empty stomach, plays a role in meal initiation/short-term food intake. It measures the highest right before consumption, and dips maximally within 60 minutes following a meal.

“In a perfectly working body, ghrelin tells us to eat so we don’t die of starvation, and leptin tells us when to stop,” says Dr. Michelle Sands, hormone, metabolism, and epigenetics expert, and author of Hormone Harmony over 35. Unfortunately, hormones sometimes find that perfect balance elusive.

“Leptin is a bigger player than ghrelin when it comes to weight gain and energy balance,” Dr. Sands says. “It’s closely tied to your thyroid and brain. When leptin is working well, we have a better metabolic rate, mood regulation, memory, brain function, and mental sharpness. When it’s not, it can play a role in obesity, mood swings, and brain fog.” In addition, Dr. Sands says that “Some people are genetically predisposed to release more ghrelin, and they get hungry faster as a result.”

Research highlights how eating disorder sufferers have problems regulating feelings of hunger and satiety; whether this hails from an emotional or physiological place, such circumstances may perpetuate and/or contribute to the onset of anorexia.

Given that leptin directly affects appetite/body weight regulation, scientists set out to determine whether leptin played any role in eating disorders. Researchers measured leptin levels in 67 women: 21 anorexics, 32 bulimics, and 14 binge eaters. They compared/contrasted these values to those of 25 healthy women. Not surprisingly, the anorexic subjects displayed much lower leptin levels.

As anorexia proceeds to a more serious level, ghrelin levels go up, as expected with someone hovering near starvation. Upon the refeeding that accompanies intense therapy, the level of ghrelin plummets, which may explain why many people with anorexia struggle to put on weight. After long-term bouts of the disease, normal hunger signals frequently fail to function. It requires time and a tremendous caloric load to add weight safely.

The physiological status of an anorexic patient differs vastly from that of an average dieter; therefore, where these individuals seem to have found a way – albeit dangerous – to drop significant weight and keep it off, those results do not necessarily apply across the board.

Researchers at Rockefeller University discovered the leptin gene almost 20 years ago. We have now come to understand how leptin functions as one of many reasons why diets don’t work. As body fat stores go down, so too do circulating leptin levels. Lower leptin levels throw off the body’s satiety response; now the body takes longer to register the feeling of fullness following a meal. Over time, this scenario serves to bring the body back to its original weight, often with a higher percentage of fat tissue than before the loss.

The function of ghrelin first gained notice as a stomach-derived hormone involved in energy balance, hunger, and food consumption. Recent work now highlights its role in reward-driven behavior via activation of the so-called “cholinergic-dopaminergic reward link”.

According to research published in the journal Addiction Biology, ghrelin not only reduces fat utilization but also plays a key role in the food reward cascade controlled by the brain’s pleasure-reward system. Ghrelin levels are negatively correlated with weight, so dieting (especially severe calorie restriction) tends to increase ghrelin output.

Individuals who embark upon severe caloric restriction in an effort to reduce weight often find the diet cannot be sustained long-term, due to an eventual lack of willpower, increased hunger, and a reduction in their metabolic rate. The human body interprets such a situation as “famine” and reacts appropriately for survival. As metabolism slows, in an effort to conserve energy, dieters very often experience a surprising regaining of weight. Leptin levels fall rapidly in response to fasting/severe caloric restriction, thereby bringing about profound hormonal changes. Low leptin levels can lead to overfeeding and suppressed thyroid activity.

In addition to increasing appetite, ghrelin may also encourage the build-up of abdominal fat. Increased ghrelin syncs directly with stressful situations, as evidenced by the multitude of individuals who tend to mindlessly eat when stressed. Ghrelin contributes to weight gain by maintaining these stress levels (rather than allowing the body to return to homeostasis); the cascade culminates in strong urges to randomly snack or overeat.

Several molecules and signaling pathways associated with leptin and ghrelin receptors have been identified as potential targets for pharmaceutical treatment, with the goal of overriding resistance to these hormones. Developing such medications could someday mean more effective treatments for individuals living with obesity.

Until then, we can help foster healthier lifestyles for our clients by steering them away from fad diets, and more towards prudent eating habits. Balancing macronutrients and exercise, trainers and dietitians can help clients conquer the mysteries of leptin and ghrelin and thereby gain better control over their physiques.

Ghrelin: How to Control This ‘Hunger Hormone’ in Order to Lose Fat