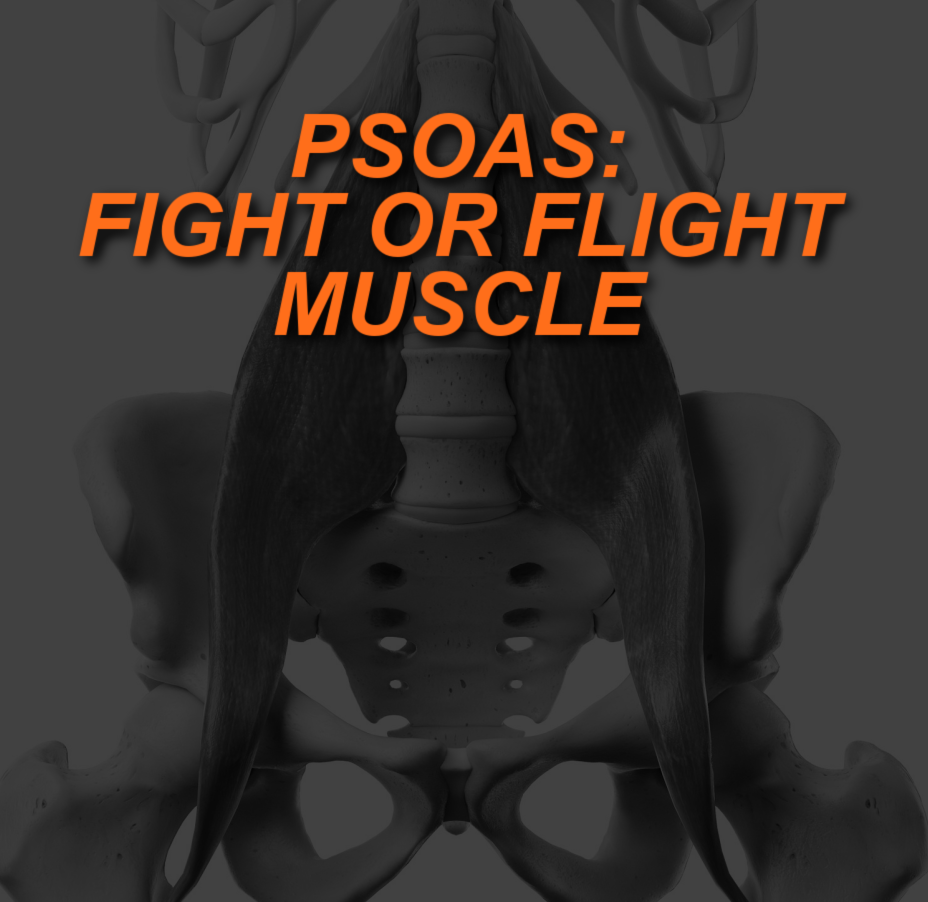 The psoas muscle is one that is talked about often– whether an athlete is blaming it for “tight” hips or when a yoga instructor claims that a stretch is going to release it. You may have even heard that it is also considered the “fight-or-flight” muscle. But what does this mean? What is the psoas? And does it actually have a connection to fear and stress?

Location and Function of Psoas 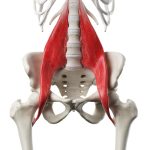 The iliopsoas muscle is a large, compound muscle of the inner hip which begins at the lumbar spine, lateral to the lumbar vertebrae and medial to quadratus lumborum. As psoas major passes through the groin to insert onto the femur, it merges with iliacus. Together, these muscles form the iliopsoas muscle. The word ‘psoas’ has colloquially become an umbrella term to refer to psoas major, psoas minor, and the iliopsoas.

Iliopsoas is the strongest and primary muscle involved in hip flexion. Though psoas major can act on its own and produce flexion at the trunk, it is the simultaneous contraction of psoas major and iliacus which produces a powerful flexion of the thigh at the hip joint, especially after 90 degrees of hip flexion.

This function means we are using and relying on the iliopsoas during basic daily movements like walking or rising from seated to standing, as well as in sports involving running, kicking, or squatting.

In addition to hip flexion, iliopsoas plays an important role in stabilizing the lower spine. Because of its location and functions, this muscle also can contribute to pain in the hips and lower back. When the psoas is tight, it can pull the spine forward and down, causing lordosis or “swayback.” The opposite– a psoas too loose– can also contribute to pain as it may be unable to provide adequate stability.

The fight, flight, freeze response is the body’s natural response to danger. This is an automatic reaction beginning in the amygdala (the part of the brain responsible for perceiving fear) which sends signals to the hypothalamus, which then stimulates the autonomic nervous system (ANS).

Some physiological responses include:

Physiological responses will vary person-to-person, depending on how the individual responds to stress. But the response always starts the same way– from a psychological fear.

Fear, and perceived threat, will be different for each person. For example, a person who is afraid of dogs may find that their fight or flight response is triggered when encountering a growling dog while out on a walk. Someone who is comfortable with dogs may have no response at all.

Because it is left to perception, fears that don’t really require action like fighting back or running away– like giving a presentation or having an uncomfortable conversation– can also trigger this response. This is considered an “overactive” response and is more common in those with trauma or anxiety.

Connection Between Psoas and Fight or Flight

Considering psoas is a major hip muscle, it is one of the muscles which would experience increased oxygen and blood flow during this response.

As the body readies itself to either fight or to flee, the musculoskeletal system has to work synergistically with the nervous system. As with any movement, it begins with the brain telling the body what to do and thus, which muscles to recruit.

In the case of fighting, the brain might signal muscles like serratus anterior, the boxer’s muscle, or psoas to prepare the body to punch or kick the threat, respectively. To flee, the muscles involved in rising up & running away would need to be activated which, again, largely involves the psoas. Finally, in the third case of freezing, the body would need to stabilize, to hold still, activating core stabilizers including, once again, the psoas.

For this reason, the psoas is believed to be closely related to the fight or flight response. Similarly, there has proven to be a close relationship between low back pain and anxiety or mood disorders. Studies have found psoas major to be one of the principal actors in the psycho-somatic experience and the reactive stress system. Most notably, there appears to be a link between psoas major and the incidence of and relief from post-traumatic stress disorder (PTSD).

In all of these events, the psoas would contract and this constant contraction could later lead to pain, discomfort, fatigue in the muscle.

Why does the psoas matter?

If only for moving better in our day-to-day activities, psoas would be a significant muscle to consider. But knowing it has such a deep connection with our nervous system and stress hormones makes it even more critical to understand.

Additionally, in working with our clients, it is important to understand what could be happening to their bodies when this response is triggered, and also to know that a new or challenging exercise could be perceived as a threat in someone with an overactive stress response.

Ultimately, it teaches us that tightness in this muscle is particularly complex, so a simplified answer (like stretching) may not be enough. In clients with “tight hip flexors,” or a short psoas muscle, we may also suggest incorporating practices designed to calm the nervous system, like yoga or meditation.

About the Author: Kellen Nyemb