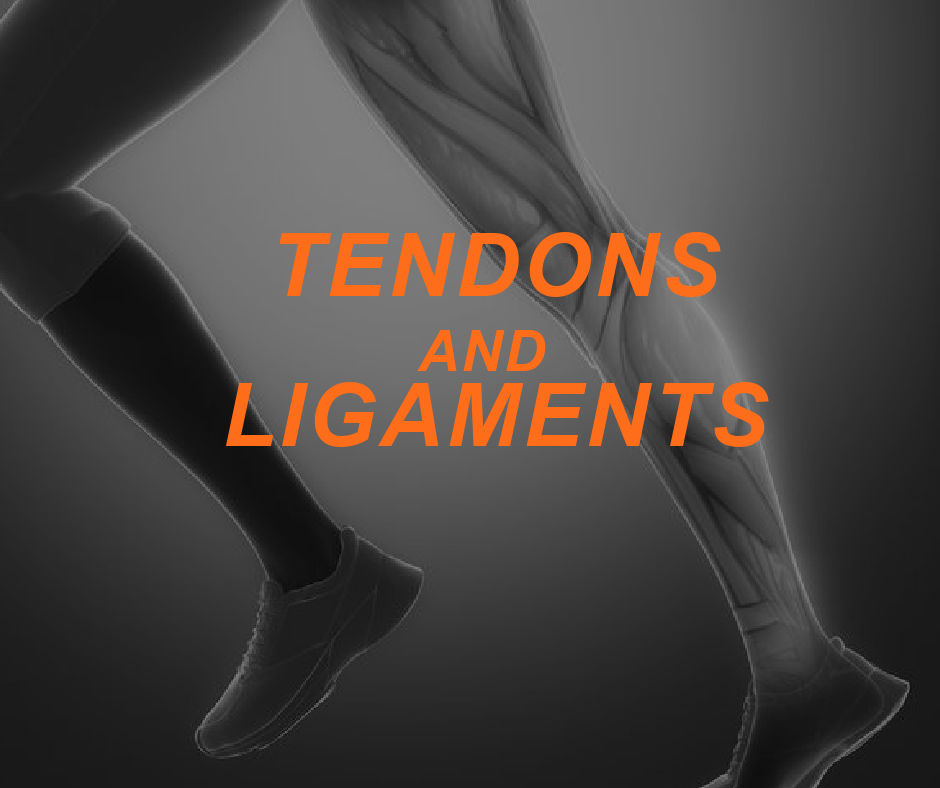 Connective tissue is the most abundant and varied tissue in the body. Most likely, the first variety that comes to mind are your dense tissues, such as tendons and ligaments that connect our muscles and bones together, and are those which our fitness clients are most familiar.

Tendons are comprised of thick, rubbery white tissue. Every muscle has a tendon on each end that attaches the muscles to the bone. Any kind of skeletal movement, from walking to lifting weights, happens because the muscle contracts and pulls on the tendon, which in turn pulls on the bone and moves it.

Ligaments are also attachment tissues, but they connect one bone to another and hold the joints together. Ligaments are thinner and less elastic than tendons. Although tendons and ligaments and don’t have the capacity to build a large network of blood vessels, per se,  it is possible to manipulate the adaptive process to lead them to their greatest possible development.

Although it runs below the surface, strong connective tissue has a marked effect on what does show. A loss of elasticity, which is the major sign of aging in white tissue, can be delayed and/or reduced by proper conditioning, some studies have shown. In addition, if a maximally vascularized tendon or ligament is injured, it will heal better, and full function will return much more rapidly than it would in less conditioned white tissue.

Two kinds of vascularization are important in building connective tissue. One, known colloquially as the “pump” occurs after a muscle contracts repeatedly, using a great deal of energy in the process. In order to function as it called upon to do, it needs large and immediate amounts of oxygen and nutrients. Using energy also produces waste products that need to be quickly removed in order for the muscle to continue working.

The body responds by sending a greater supply of blood surging through the blood vessels of the muscle to nourish it. This is noticeable as heat and swelling. The other response and adaptation and vascularization process applicable here is known as capillarization. As blood vessels of the muscle in question grow as they continue to be “pumped”, new capillaries begin to branch out furnish even more blood to the area. This increased supply of blood supply allows the muscle to grow in response to training. The increased muscle mass creates the need for more blood supply, and the two adaptive processes complement each other right up to the limit of a person’s genetic potential, or perhaps more accurately, his or her level of dedication up to that point.

Warm Up, To Build Up Tendons and Ligaments

The first part of any tendon/ligament conditioning program should begin with a proper warm-up. For this to be effective, it is essential that stretching comes afterward. A true warm-up increases the body’s core temperature of the body. Whether that means going for a brisk walk when exercising outdoors or hopping on a stationary bike in the gym, it is necessary to raise the core temperature before doing your stretching, as it makes tissues more pliable. A light sweat is an indication of a sufficient state warm-up, because the body’s attempt to cool itself shows that the core temperature has increased.

While the work aimed at the muscles will provide some degree of conditioning for the tendons and ligaments, it will be less efficient than a workout designed with the connective tissues in mind. For improving connective tissue, flexion and a high number of reps with minimal resistance should be involved. This is because as the joint is stressed during exercise, the ligament will respond to being stretched. The more it is stretched, the more it will respond by adding cells and collagen, effectively strengthening the joint.

To strengthen a ligament means improving its blood supply. In order for the ligament to get larger, it has to have more blood. The blood is interspersed between the collagen fibers. When a muscle is contracted repetitively, it automatically vascularizes the tendons – within their limits.

Workouts designed to give flexibility and/or definition to muscle groups should be interspersed with overloading types of routines that load the muscle beyond its present capacity. Low weights with reps in the 20-30 range will stretch the muscle and stimulate blood flow. However, unless the muscle it overloaded, it is not likely to build mass nor develop blood vessels.

When we think of  “weak links” in the kinetic chain, muscle tissue often jumps to mind. But tendons and ligaments merit special attention. Unlike muscle, which when exhausted can continue to train after resting for a day or so, an injured tendon or ligament can herald more significant problems. Because connective tissue builds and heals much more slowly than does muscle, even a partial tear can take months to heal; in some cases, it may never heal completely. A complete tear typically means surgery, and from 6-9 months to heal. This also leads to atrophy in adjacent muscle tissue, since they can’t be worked during the recovery period.

Tears are perhaps the most noticeable types of connective injury, but there is a more insidious type that can show up when it’s least expected. Such are microtraumas, which as the name suggests, involve microscopic injuries to tissue and often result from repeated overuse and not enough recuperation time. A creeping microtrauma occurs to a ligament or tendon often means the tissue is being stretched excessively.

For example, if a ligament stretches more than 10-15% beyond its normal length, it will tear. However, if it stretches 8%, it will typically incur a microtear, or microtrauma. If the ligament is repeatedly stretched by 8%, it can weaken to the point where it takes less force than it otherwise would for it to be ruptured.

Some signs of microtrauma include:

If one or more of these signs are noticed, it’s important to take them seriously and allow for some recuperative downtime.

Among bodybuilders, tendons tend to be injured far more often than ligaments. If a tendon is injured seriously enough to interfere with training, but not seriously enough to require medical care, proper rehab is necessary. It is essential to take time to rehabilitate a soft tissue injury, no matter how minor it might seem. “Working through the pain” carries the risk of letting temporary inflammation lead to chronic inflammation, known as tendinitis.

In such an instance, the best way to deal with a tendon-related injury is to rest it until the acute inflammation phase is past. When resuming training, do so gradually. If there is pain during the workout, but it subsides, it’s likely that things are fine. However, if pain persists two hours later, it is likely due to overexertion and the routine should be modified accordingly.

Ending a workout with a proper cool-down is as important as beginning it with a proper warm-up: It is a must. It should most certainly involve self-myofascial release in the form of foam-rolling, and followed up by gentle static stretching to return muscles to their normal extensibility.

Exposure to cold water (in the range of 60-70 degrees F) can help restore muscles more quickly than heat and can help heal microtrauma. Once you’ve taken time off to rest an injury, proceed with stretching, negatives, and a few low-weight/high-rep workouts. While it might mean losing a few weeks out of a cycle, it is still preferable to losing even more months and working one’s way back from surgery for repairing injured tendons or ligaments.