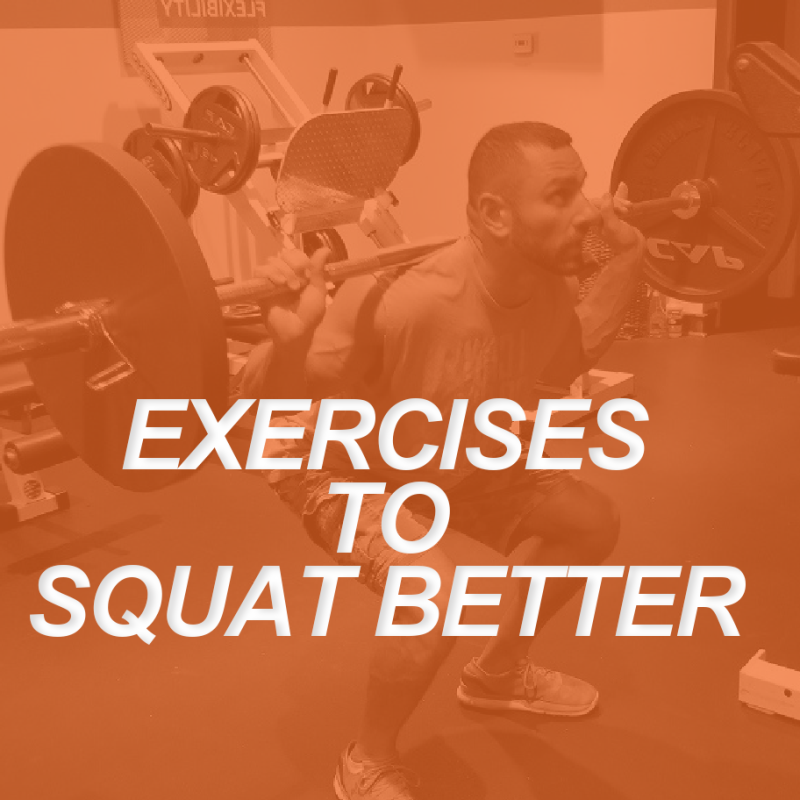 The squat is a true test of lower body strength. Any serious commercial, collegiate, professional, or home gym will have a squat rack and a bar to rep out some grueling leg days. A “big” squat represents lower body strength and power, packing on mass and improving athletic performance. Traditional squats alone, however, may not be sufficient enough to help build a better squat; additional exercises may be needed to push your fitness clients to the next level. Below are 10 of the best exercises to build a better squat are discussed for your next training regimen.

Choosing the Best Exercises for a Better Squat

When choosing the most effective exercises to improve the squat, one must remember the importance of specificity. Specificity training is a must, and the more specific the training method is to the goal, the more the training will carry over to attain that goal. This is called the specificity principle, credited to Dr. Fred Hatfeild and his seven granddaddy laws of training.

This principle indicates that the priority exercise to improve your squat is the squat. However, as previously mentioned, only squatting one way may be impractical to implement or simply not enough alone. Overuse injuries and plateaus can occur due to a lack of variation in training, therefore, accessroy exercises must be added to build a better squat. These exercises should be specific to the squat movement pattern and/or address the muscles that support this movement pattern.

This list of the 10 best exercises to build a better squat is in order of most to least specific with description of what they accomplish.

The first exercise on the list is the pause squat. For the pause squat, the lifter will perform their standard squa,t but with an isometric hold at the bottom of the squat. The bottom of a squatter’s movement puts the gluteal muscles in their most lengthened position, which reduces tensile strength, and is therefore the point at which the muscles will have the most difficulty firing. This hold is purported to strengthen what tends to be the weakest point in the squat and builds power during the initial ascent.

The pin squat is very similar to the pause squat, but the lifter will hit pins set a specific height on the squat as a cue to squat up. Set the pins at the desired squat depth as determined by squatting with an empty bar, then perform the working sets by gently hitting the pins. Pin squats are great for lifters having difficulty reaching the desired depth in their traditional squat. (A pause can also be added if the lifter wants to focus on power out of the “hole”.)

With the principle of specificity in mind, changing the position of the bar on a lifter’s back is one of the best accessory exercises to help improve one’s back squat. If a person’s normal squat is a low bar squat, as discussed in Powerlifting Primer (https://www.nfpt.com/blog/powerlifting-primer-an-intro-to-strength-sports), changing the bar position to a high bar squat will shift the torso to be more upright and place greater focus on the quadriceps. Vice versa is true too. If traditionally the lifter squats high bar, switch to low bar to build up the hips and glutes a bit more.

The safety squat bar changes the center of gravity in the lift and positions it similarly to a front squat. This forces the body into a more upright position and creates greater forward knee bend, thus placing more emphasis on the quadriceps. The bar still rests on the lifters back and can be considered a bit more specific than a front squat.

The front squat has the bar placed across the deltoids being held in a front rack position. The front squat will place greater emphasis on the quadriceps just like the SSB squat. This is important if a lifter is falling forward or having their hips shoot out because of quadricep weakness. SSB and front squats can be added to build up the quads and get the lifter in a better upright position for their traditional squat.

The Zercher squat places the bar in a traditional carry position in the crook of the elbow. This carry position challenges trunk stability and stiffness during a squat. Lifters with weak cores and round their backs while squatting can benefit from Zercher squats. The bar position strengthens the upper and mid back with enough stimulus to train the lower body.

This lunge position is a great unilateral movement to address any weaknesses from side to side. Noticeable hip shifts, lacking strength from one leg compared to the other, and any other unevenness  in the squat can be addressed by training a split squat variation. This can be performed with a standard bar or a specialty bar, and is best to strive for 90/90 degrees between each leg at the bottom of the movement like a lunge. Variations in stance can be tried for differing emphasis, but when starting out master the traditional approach.

Leg presses, similar to the hack squat, pack on lower body mass. The leg press is lower on the list because the hack squat is more similar to a squat pattern, but the leg press machine is an applicable tool for lower body hypertrophy. Different foot positions will result in different lower body emphasis. Higher and wider foot positions on the platform will work the hamstring and glutes more, while closer and lower positions will train the quadriceps more. Identifying the lifter’s weakness on the squat should help determine where the foot position should be.

Sled training is a tremendously beneficial exercise to implement for a lifter’s squats. Although there are numerous exercises that can be performed using a sled, backward drags and forward pushes are great for squat development. The concentric-only phase of these sled movements is great for building work capacity of the lower body without the musculature damage that comes from the eccentric phase. Sled work is often included as an approach in “farm worker” workouts.

When implementing these exercises into the squat and lower body routine, keep in mind the lifters weakness that need to be addressed. If a lifter is fast out of the bottom but can not keep a neutral spine, Zercher squats in addition to their traditional squat may be more beneficial than a pause squat. Next lower body day, try a few of these exercises to build a massive squat.

Brendan Todd is a NSCA Certified Strength and Conditioning Coach with a B.S. in Exercise Science from Rutgers University. Brendan competes as an international, drug-tested, powerlifter and coaches athletes and clients on achieving their strength and fitness goals. You can follow him on Instagram @tankstrength and email him at [email protected] for any inquires.