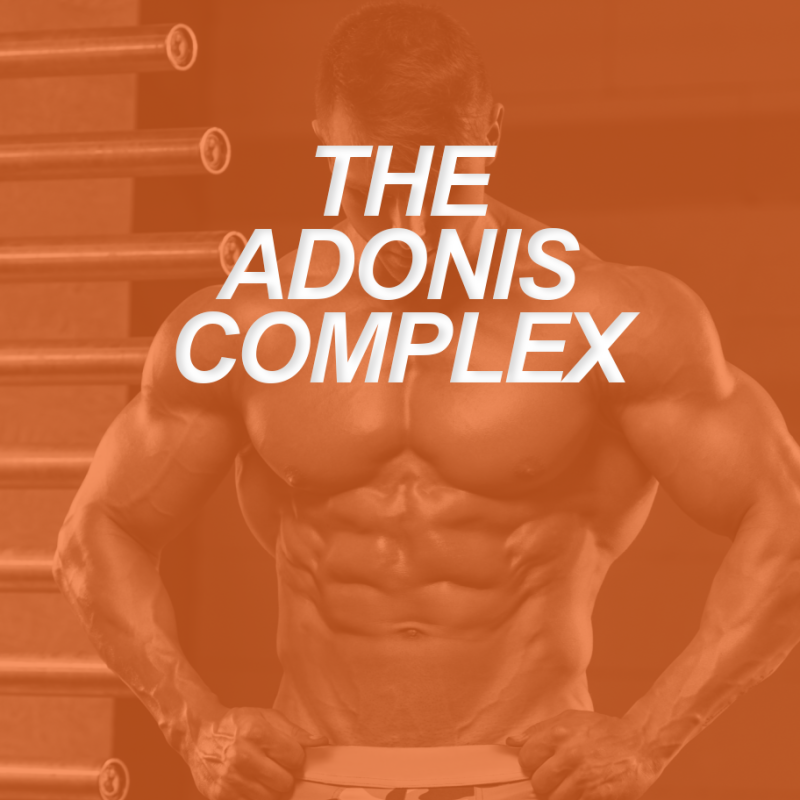 Can the drive for extreme muscularity turn into an unhealthy obsession? “The Adonis Complex”, aptly named after the Greek mythological character whose body was said to represent the ideal standard of muscularity, is a real thing. As men obsessively chase an impossibly perfect physique, fitness experts see this condition affecting an increasing number of male clients.

The drive for youth and physical perfection, long dominated by women, seems to have affected the male species as well. Eating disorders, plastic surgery, and Botox injections represent some of the ways in which women attempt to capture the media’s portrayal of the ideal aesthetic.

However, over the past 20 years, nearly 136,000 men underwent rhinoplasty to alter the shape of their noses; 48,000 entered the world of liposuction; and 106,000 subjected themselves to Botox injections in an attempt to stave off the appearance of wrinkles/age. Even outside of the gym, men have succumbed to the pressures of appearance-related perfection.

Does society shoulder this burden, sending messages that propel us to chase some unattainable ideal physique?  It should come as no surprise that men today, like women have for eons, find themselves challenged to keep pace with some insurmountable icon. As recreational lifting and exercise activities turn a dangerous corner, fitness professionals have begun to observe a frightening trend toward a condition known as muscle dysmorphia.

Often referred to in the world of psychopathology as “reverse anorexia”, individuals feel preoccupied with increasing their muscle mass, propelled forward despite the fact that their physiques already boast the efforts of hours spent in the gym. Epidemiologic data suggest that muscle dysmorphia, though rarely recognized, may actually affect a substantial percentage of the male fitness-minded population.

Collectively, these professionals feel that between today’s societal views and social media, this problem wields a duality of detrimental power both biological and psychological. Men receive unrealistic messages emphasizing an ever-more muscular, ever-more fit physique, to the point that nothing will ever prove “big enough”.

Muscle dysmorphia involves a specific dissatisfaction with muscularity rather than the body as a whole; however, similar to anorexia nervosa, the issue lies in the discrepancy between the imagined and actual self. The condition brings about emotional distress, impaired social/occupational functioning, and abuse of anabolic steroids and other substances.

Sadly, these men view themselves as physically inadequate, to the point of experiencing humiliation and shame at having their bodies perceived as “too small”.  This leads to the avoidance of any social activities that may steal time away from dedicated workouts. In extreme cases, men can get so obsessed with increasing their body size that they lose all interpersonal relationships; and too much time spent prioritizing exercises instead of work can lead to termination from their professional jobs.

While we expect that dedicated weightlifters may devote upwards of an hour a day to their endeavor, those suffering from muscle dysmorphia might focus as many as five hours a day on altering their perception of an “underdeveloped body”. Compared to an average “mirror check” of three times per day for recreational bodybuilders, these men obsessively sneak peeks at their reflections, sometimes as often as 12 times daily.

Steroid use figures prominently among those suffering from this obsessive-compulsive disorder, with blatant disregard for the dangerous side effects. For these men, their sole purpose rests in further increasing muscle mass on a body that will never satisfy their insatiable quest for adequate size.

We see the incidence of muscle dysmorphia increasing, both in the United States and in other regions of the world, perhaps due to a heightened awareness and recognition of the condition. Although few treatment options exist for these individuals, a combination of specific therapy and medication does appear to work.

Identifying the disorder poses the first hurdle, since muscle dysmorphia does not present like other psycho-behavioral conditions such as anorexia or bulimia nervosa. Many affected males may even appear normal and healthy to an untrained eye.

Table 1 outlines some basic criteria for determining and diagnosing The Adonis Complex:

-The uncontrollable focus on pursuing the usual training regimen causes the person to miss out on career, social and other activities.

-Performance in the work and social arenas is affected by the presumed body deficiencies.

-The potentially detrimental effects of the training regimen fail to discourage the individual from pursuing hazardous practices.

Unlike anorexia nervosa, in which the person is concerned about being overweight, or other types of body dysmorphic disorders, in which the concern is with other physical aspects, the individual with muscle dysmorphia believes that his or her body is insufficiently small or muscular.

Is “Perfect” Even Possible?

One study of this condition examined the mediating role of perfectionism, whether self-imposed and/or socially prescribed, in the relationship between the influences of media/peers/taunting and symptoms of muscle dysmorphia. Male volunteers (158) participated in this study, answering questions regarding various measures of perfectionism, muscle dysmorphia and body dissatisfaction. Susceptibility to appearance-based messages from the media, their peers, and family was also measured.

The data confirms that socially-imposed icons of perfectionism served at least as a partial mediator between all three sociocultural variables. However, muscle dysmorphia and The Adonis Complex seem fully fueled by socially prescribed perfectionism. Scientists take the view that perhaps the evolution of this condition may depend on an individual’s pre-existing attitude regarding perfectionism within other areas of life, complicated by the media attention given to perfect athletic physiques.

How We Can Help

Athletes in particular find themselves acutely susceptible to developing body image disorders, owing in large part to the pressures surrounding competitive sport performance and societal trends promoting muscularity/low body fat. Personal trainers can better serve their clients by familiarizing themselves with the common signs and symptoms of muscle dysmorphia, as well as the treatment and referral options.

While society may never tame its media-driven exploitation of the iconic Adonis, males can take productive steps upon recognizing that they suffer from muscle dysmorphia. Cognitive-behavioral techniques have proven highly effective, allowing the individual to strategize his thinking toward a more reasonable, honest and attainable goal.

As an integrated health/ fitness/personal training community, perhaps the time has come for us to re-evaluate what a man should consider “the best”, and allow himself to come to peace with simply being his “best”.