Walking and using the elliptical machine are often both used as part of general fitness programs. While they are very alike in many respects, it’s important to realize that one might have an advantage over the other depending on a client’s state of health and fitness goals.

Walking as we know it would seem to be as old as our species’ bipedal ability. The elliptical machine is a relative newcomer in the scheme of things, originating in the mid-1990’s, making the question of which is ‘better’ hardly an age-old one. The short answer is that both activities have their merits, and both can yield great results.

So what are some of the main pros and cons of each?

According to several recent studies,elliptical training leads to a greater activation of muscles in the buttocks and thighs than does walking, though it results in less activation of the calf muscles.1,2

Training using the elliptical machine also puts greater strain on the lower back than walking. That’s due to the sequence of how the muscles are recruited, and this therefore should be a consideration for people with known back problems.

The elliptical also involves less weight bearing than walking. Its name derives from the use of a mechanism that involves a rear flywheel with a forward foot pedal to produce an elliptical motion – a smooth move, indeed! By keeping the user’s heels in contact with the pedals, stress on muscles and tendons is reduced compared to walking. The combined effect is a fairly fluid motion, which leads many to give the elliptical a lower Relative Perceived Exertion (RPE) score than other forms of exercise. 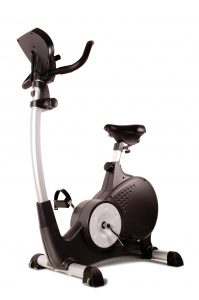 Perhaps this is one key to its popularity: Often, it’s possible for the user to feel as though he or she isn’t working as hard as he or she really is. In terms of joint impact, according to one study, walking causes 112 percent of someone’s body weight to strike the ground with every step, compared with 73 percent when using the elliptical trainer.3 This could suggest that the comparatively impactful activity of walking is advantageous for people who experience joint soreness, and that it may be less beneficial for people aiming to improve bone health.

In terms of energy use, walking and elliptical training come out about the same – the difference is just about negligible, research has shown. In one study, participants were asked to complete two 15-minute bouts of exercise, one on a treadmill, the other on an elliptical machine.4 In both exercises, they were told to maintain a pace that they experienced as challenging but sustainable (about a ‘4’ or ‘5’ on a 10-point intensity scale). During each session, researchers observed participants’ energy consumption and found that it was the same no matter of which machine they happened to be using at the time.

When weighing the comparative advantages, it may simply come down to what is most practical for the situation, particularly for a client with no contraindications to either exercise. Walking can be done in broader range of settings than using the elliptical, for instance. For clients with joint issues, the elliptical machine and its less jarring movements may be the better choice. For those trying to improve bone health through the impact of exercise, walking may hold a greater appeal.

It’s important for the client to keep in mind that intensity is something that can be varied in any exercise. So if a brisk walk doesn’t seem as tiring as a session on the elliptical machine, perhaps it’s time to pick up the pace. Or, maybe, just kick things up a notch or so on the elliptical!