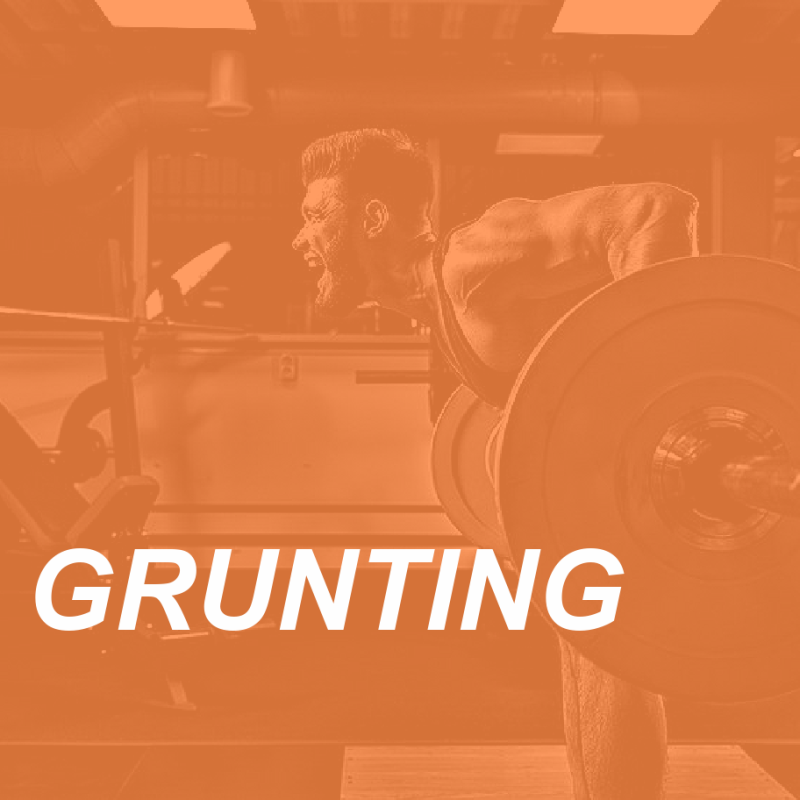 Hang out in a gym, especially in a weight room, and you’ll likely hear some grunting. The guttural sound echoes from the gym walls. Is grunting necessary for gain or an indication of too much strain? Let’s hash it out.

“While a lot of that can be showmanship, there are actual reasons lifters do this,” said certified personal trainer Michele Rogers. “Coming from a powerlifting perspective, sometimes the heavy grunting is a pretty normal consequence of lifting heavy, especially when using the Valsalva maneuver. It’s believed to generate energy, force production, and core stability.”

The Valsalva maneuver is where the breath is taken in, held, and then attempted to be forced out against a closed airway. The process can protect and stabilize the spine by generating pressure within the core. Note that it isn’t considered to be a safe method for some people, including those with heart or blood pressure issues.

As for the actual grunt, for many exercise junkies and weightlifters, grunting is a way to get pumped up. It evokes that extra power needed for a heavy lift or power move. Sometimes, it can’t be prevented. The octave level might determine how objectionable the grunt could be to other gym-goers who have to listen to it.

For those of us not competing in a strong man competition, it can be a sound of strain or increased momentum. The grunt ekes out on an exhale. If the grunting is due to strain or too much overload, it’s a red flag to evaluate what’s going on before there’s potential injury.

Weightlifting isn’t the only sport where grunting comes into play. Watch a shot put thrower push the metal shot into the air and you’ll almost always hear a grunt. Tennis players often grunt on a serve or overhead shot. Similarly, grunting might resonate during mixed martial art competitions.

For those who want to get noticed, slamming down weights (not including drop sets) and showing off in front of the mirror are two ways. Grunting is another way to do it. Our gym has some predictable grunters who want to be seen…and heard. If that’s the case, it is going to be distracting to others and is usually annoying. And it might get the grunter in trouble. Some gyms have actual rules against grunting.

To Grunt or Not Grunt?

It’s like the good, the bad, and the ugly. Sometimes, it’s necessary. Sometimes it’s for attention. And sometimes we don’t even know it’s happening.

On a side note, I became highly aware of grunting while researching and writing this blog. I like to think that I never grunt. A lot of the time my music is played so loud that I can’t hear anything else anyway. Twice, in one workout session while pushing for PRs, I heard myself grunt. It wasn’t loud, but it surprised me to notice it!

Listen carefully and you might even hear yourself grunt when you thought that you didn’t.

Kim Becknell Williams is a freelance writer with more than ten years of personal training experience. Certified through NFPT, she is a Functional Training Specialist and holds a Master Trainer level certificate for resistance, endurance and sports nutrition. Kim has written two books including Gym Etiquette 101. She enjoys writing a variety of lifestyle articles and fitness blogs.