Resistance Training: Is Fast Or Slow The Way To Go?

Working with clients can be one of the most rewarding experiences of a fitness career. We see it all, from fads to tried-and-true principles to each client’s favorite exercise that they deem necessary to perform each time they set foot in the gym. Based upon our knowledge and years of experience, we realize there are many theories on strength training, extolled by experts and novices alike. With every theory, we also see the ongoing debates about “the best way” to work one’s muscles.

The Tortoise Or The Hare?

Fast versus slow lifting has been a raging issue for decades. There are many proponents on either side, and the purpose of this article is to shed some light on the science behind each option as well as their unique benefits and detriments.

Performing resistance training in a slow and controlled manner is based upon a single concept: placing a greater demand upon a muscle for a longer period of time (time under tension), without invoking momentum. Some claim that extreme slowness of the repetitions is the safest and surest manner in which to train for size and strength.

Richard Winett, Ph.D., Director of the Center for Research in Health Behavior at Virginia Tech and publisher of the Master Trainer newsletter, explains the advantages of lifting slowly, based upon his personal experience. “I actually find moving slowly more interesting, because it requires such unbelievable focus and intensity and, of course, it’s different from all my past training,” he claims. “But the biggest plus is no joint inflammation.” To support this, one must understand the mechanics of such movement.

The case for training using slower repetitions revolves around a number of interrelated points:
1. the difference between demonstrating and building strength
2. the role of intensity in building strength and muscle
3. how muscle fibers respond to intensity
4. how to increase intensity.

To begin, there is an abundance of confusion surrounding the difference between demonstrating strength and building strength. At competitions such as Olympic lifting, the demonstration of strength also involves a demonstration of power. An Olympic lifter is dependent upon technique, as well as a tremendous amount of momentum, to not only lift the weight off the floor but to throw the weight overhead from the shoulders. The more technique and momentum he recruits, the better the performance. In fact, the idea is to capitalize on technique, momentum and neuromuscular learning and efficiency to facilitate the motion.

Power is defined as work performed per unit of time. Thus, it might stand to reason that the quicker a lifter can execute a move with a large weight on an Olympic bar, the more power he is demonstrating. But is training with such an explosive nature necessarily the best way to build strength?

Physics? In The Gym??

From a physics point of view, the process of using technique and momentum does not necessarily subject a specific muscle group to a high intensity stimulus. In fact, once technique and momentum are introduced into any movement, the effect is just the opposite: intensity becomes reduced. While we can observe that an enormous weight may have been hoisted and thrown, involving a high level of force (mass x acceleration), this is not necessarily the same as an 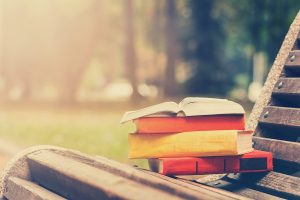 This is a perfect time to explore the key role that intensity plays in producing strength gains and lean muscle mass. Research seems to suggest that neither frequency nor volume, nor number of repetitions in a set is critical provided the lifter’s intensity is high. Intensity is defined as reaching a state of momentary muscular fatigue. Once that has been properly achieved, there does not appear to be much difference in outcome between training two or three times per week, or perhaps even once. There also does not seem to be any consequence if the lifter executes 2 or 5 sets per movement or if sets are done with 6 repetitions or 20.

The size principle states that muscle fibers are activated in order of their size. In simpler terms, this means that smaller slow-twitch fibers are going to be activated before larger fast-twitch fibers. As the smaller fibers fatigue, larger and larger muscle fibers become activated. However, once a fiber is activated, it remains activated. Hence, over time, it ends up generating less and less force until the lifter completes the exercise. A commonly held misconception is that speed of movement is the determining factor. Though it seems intuitive, the notion of moving slowly in training only activates slow-twitch fibers, while fast-twitch fibers are only activated in exercises that are performed rapidly, simply does not hold true. Admittedly, one existing problem is to define the level of intensity which fatigues muscles fibers sufficiently enough to produce the desired adaptations.

There is slow lifting, and then there is super-slow lifting. Ken Hutchins developed the super-slow method in 1982, while working with a group of elderly, delicate women. These females were participating in an osteoporosis study being conducted at the University of Florida. The protocol he followed had the women lifting weights for a count of 2 seconds and lowering them in 4 seconds. It was upon observing the subjects’ unsteady and erratic form that spurred Hutchins to develop his novel approach.

The idea of super-slow is to bring the muscles to exhaustion by keeping them loaded throughout the movement. “The basis of our belief is the in-road theory,” Hutchins says. “Basically we train your muscles by putting a weight load on them so that the muscle goes from the fresh strength that you start with to where, after several reps, it is reduced to the point where you can’t move the [weight]. Somewhere on the in-roading process the muscle gets progressively more fatigued and we cross a … threshold, which turns on a signal to the body to produce greater strength and to grow muscle.”

Hutchins goes on to point out that the super-slow method targets the body’s skeletal muscles, called skeletal muscles, the ones he refers to as “the body’s engines”. These supportive engines work very hard, the result being that they produce more heat, consume more calories, and receive more blood flow than any of the body’s other muscles. Hutchins suggests a lifter determine how much he/she can lift and then reduce that load by 30%. 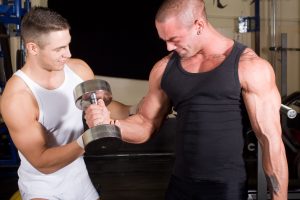 The Other Side Of The Fence

Dr. Patrick O’Shea is a proponent of lifting weights at a fast pace. Dedicated to resistance training for most of his life, Dr. O’Shea became a Professor (Emeritus) of Exercise and Sports Science at Oregon State University. He, too, has science and logic behind his stance. He reminds us that strength x speed = power. With that key idea in mind, a typical force-velocity curve will clearly illustrate a relationship between strength and speed. Only training intensity that either increases force (resistance) or speed or both will have an effect on strength and power; most likely, hypertrophy will accompany that increase. It bears mentioning here that there are many factors that influence muscle hypertrophy: type of training, intensity, nutrition and heredity.

Slow lifting also involves an element of danger not observed in faster training methods, where there is no prolonged breath holding. Put simply, slow and deliberate lifting impairs blood flow to and from the heart. When the force of a muscle’s contraction effort reaches 80 percent of its maximum potential, obstruction is virtually complete. The extent to which the heart must work during a lift is determined largely by the arterial blood pressure required to facilitate the flow of blood to the muscle tissue that is contracting the hardest. Therefore, performing sustained forceful lifting movements has the potential to increase the muscle tissue pressure, requiring a very high perfusion pressure. This reaction is part of a cascade that will then cause a large increase in pressure and reduction of blood flow back to the heart. During lifting, insufficient venous return not only impairs the heart’s blood supply, since it is incapable of functioning anaerobically, but it also causes a drop in stroke volume (the amount of blood pumped with each heart beat) due to insufficient filling of the heart’s chambers.

A research study funded by NIH (National Institutes of Health yielded results pointing to how a light level-heavy volume protocol may offer an equal if not better training stimulus for muscular adaptation than a high level-light volume protocol, owing to the greater time under tension, power, force, and work output when allowing for equating the total volume.

In order to develop slow-twitch fibers one must train aerobically. This entails lifting weights that are light enough to properly execute 12 to 20 repetitions per set, and resting for 60 to 90 seconds between repetitions. To the contrary, in order to cultivate fast-twitch muscle fibers, it is necessary to train anaerobically. This can be accomplished by lifting weights that are heavy enough to only allow 4 to 6 repetitions per set, followed by a rest interval of 3 to 5 minutes. To achieve a balance of both strength and endurance, thereby developing both slow-twitch and fast-twitch fibers, a prudent approach might be to blend both forms of training. In this scenario, an athlete lifts weights with proper form proper that allow for the completion of 8 to 12 repetitions per set, then resting 2 to 3 minutes between sets.

There are four values that define the tempo of an exercise: 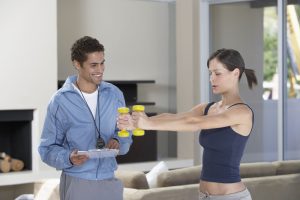 Over the course of 4 weeks, both the neural pathways and muscle tissue adapt to a familiar training program. Most experts agree that in an effort to thwart the dreaded performance plateaus, it is best to change up the workout. Try lifting fast on some days, and at a moderate-to-slow pace on the other days of the week. This rep-timing technique helps to achieve many different goals: boosting power, growing muscle, and building endurance. Tweaking exercise tempo also goes a long way in alleviating boredom and burnout.

One can benefit from weightlifting in either a slow or fast manner, the real difference lying in one’s ultimate goals. As with anything worth pursuing, start with the end in mind.