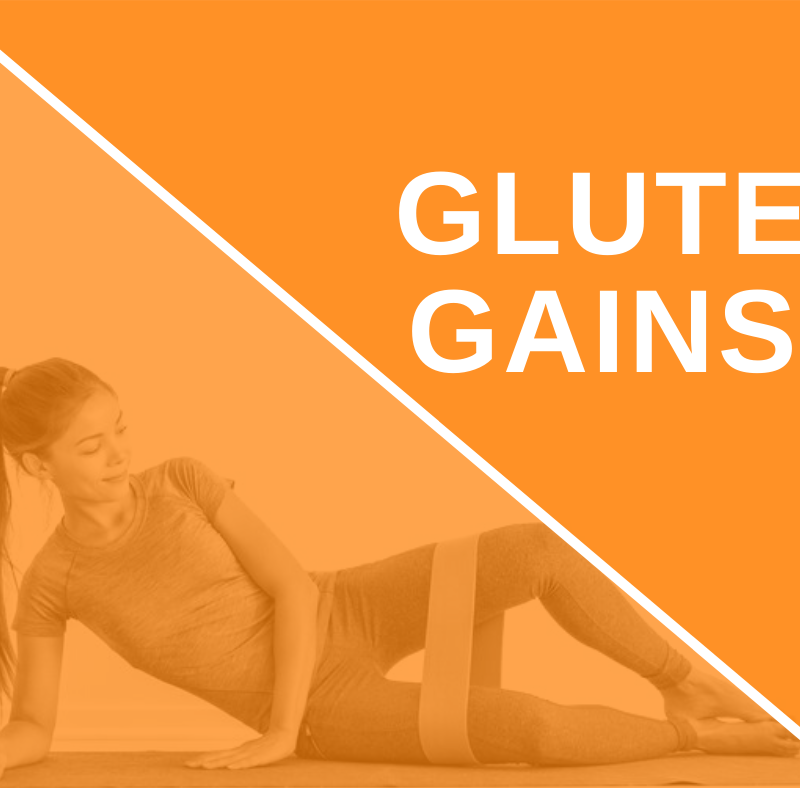 There has been a fair amount of focus on glute gains and growth both in my blogs and in my personal and professional life this year.

While the big lifts and compound movements tend to have the most overall effect on body composition, accessory exercises are the smaller, less intense exercises that help improve imbalances and improve technique and strength.

The Glute Stars and Their Supporting Roles

If glute gain goals were a hit movie, hip thrusts, squats, and deadlifts would be the stars. But the supporting roles would be the accessory exercises that complement and improve these larger exercises.

There is certainly no shortage of glute accessory exercises to choose from, but we can’t add them all in for every workout session. Therefore, I propose adding the following five accessory movements for four to six weeks to help clients target their glutes.

Target: The glute medius is the prime mover in this exercise.

Technique: First, add a mini-band either just above or below the knees. Then, lay on one side of the body with knees bent at a 45 degree angle, shoulders in line with the hips. Knees, hips, and shoulders are all stacked on top of one another. Bottom arm can hold the head or rest on the floor. Keep the feet together while lifting the top leg as high as possible without shifting the hips or pelvis. Lower knee back to starting position and repeat.

* Another variation to this movement is standing hip abduction.

Target: All three major glute muscles, maximus, medius, and minimus are activated, as are the quads, hamstrings, spinal erectors, and adductors to varying degrees.

Technique: Lay supine either on the floor or with the back on a balance trainer. Bring the heels of the feet together and the knees out so the hips are externally rotated (like frog legs!). Press into the sides of the feet to push the hips up and lower back down. Torso stays long and head facing the ceiling.

Target: All three major glute muscles, maximus, medius, and minimus are engaged in this movement.

Technique: Lie on the floor with feet lined up under bent knees. (Shifting feet forward so that the knees are bent to 90 degrees may engage glutes slightly more.) Drive through the heel to lift the hips in the air. Then, lift one leg in the air placing all of the balance in one leg. Hold that position for 20-30 seconds.

*add a balance trainer or elevated surface under the feet to create a dynamic exercise.

Target: The primary targets in this exercise are the hamstrings and glutes, however, forearm flexors, core, traps, lats, and erectors also challenged.

Technique: Start with a straight spine and the feet hip-width apart while holding a barbell, dumbbells, or even a kettlebell in front of the body. Squeeze the shoulder blades back and keep them together from start to finish. Hinge the hips back bringing the torso parallel to the floor imagining a yardstick strapped to the back, where head and spine stay affixed.

Keep only a soft bend in the knees (differentiating the movement from a conventional deadlift), executing a slow eccentric phase, stopping at the shins, rather than returning the weight to the ground, and drive through the feet to return to standing tall and proud.

*To create variation in this movement, try single-leg RDL’s or snatch grip deadlifts.

Target: All three major glute muscles, maximus, medius, and minimus in addition to the core for stability are fired up in this exercise.

Technique: Place the back foot on an elevated surface such as a box or bench, laces down. Step the front leg out far enough so that when the front knee bends, it lines up right over the foot. Drop the back knee down towards the floor and the front thigh to parallel.

*Options for added intensity: slow the eccentric phase down to a four-count, place the back foot in the cradle of a suspension trainer, and/or hold dumbbells at the sides.

Not only will these five exercises greatly contribute to stronger, shapelier glutes, but they will play a vital role in enhanced technique and form in some of the bigger lifts like squat, deadlifts, and hip thrusts.

Adding Accessory Exercises to the Program

It is not uncommon to see accessory exercises thrown in at the end of a workout that began with bigger lifts. Even though the big lifts take a lot out of the body, when there is a little gas left in the tank, it is really a great time to work on accessory movements. If big lifts are not on the menu for the day but there is some metcon or circuit training involved, don’t be afraid to program a few accessory movements throughout. They can serve as active recovery.