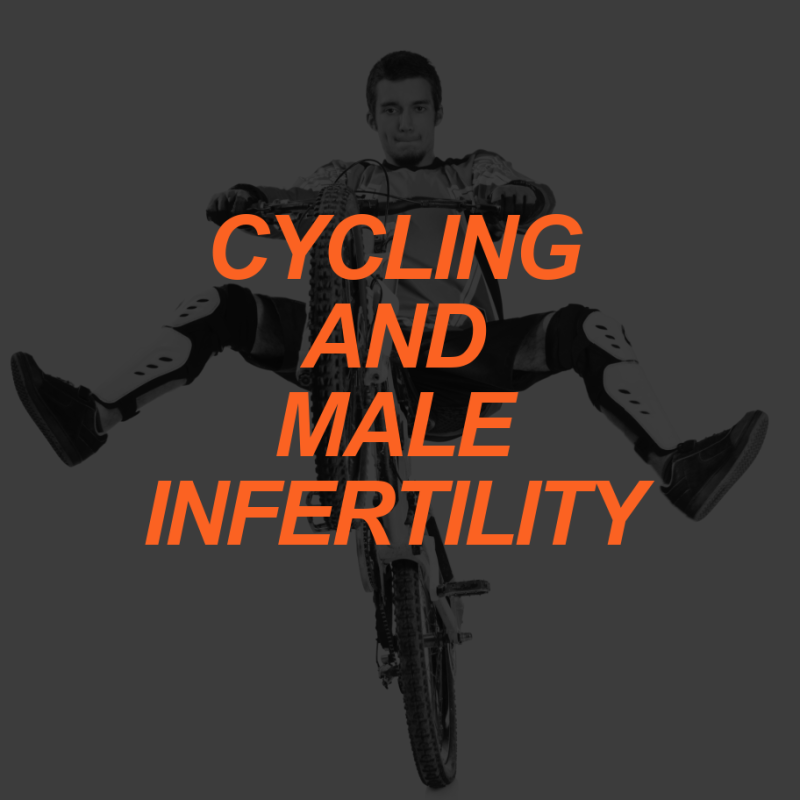 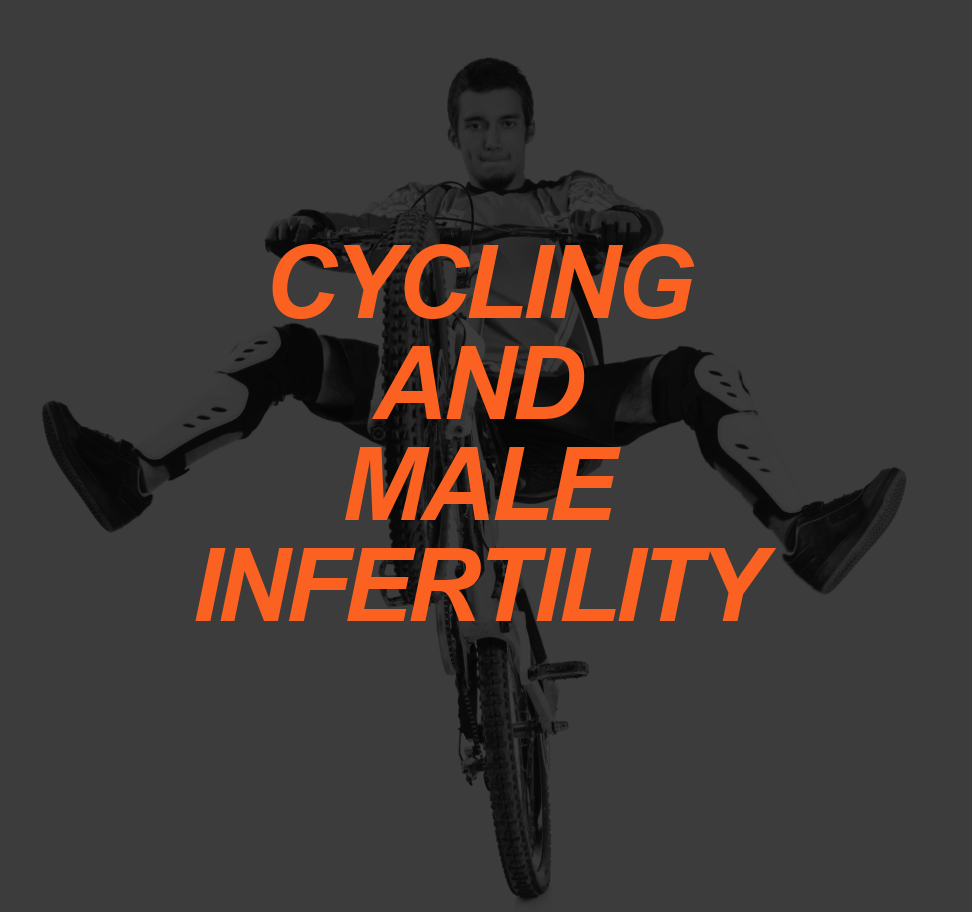 Mountain biking and competitive cycling, among the world’s most popular modes of exercise, carry the potential risk of male infertility and other risks to men’s health. Learn about the challenges, and how best to inform and support your clients who ride frequently and hope to start families.

Today’s research highlights the fact that intense cycle training may negatively impact male fertility. Data support the wealth of anecdotal evidence showing that bicycling may reduce not only the number of sperm in a sample, but also sperm motility, sperm morphology, and overall concentration.

A joint study from the Boston University School of Public Health and Boston University’s Slone Epidemiology Center followed volunteers in the Boston, MA area over the course of 10 years. The study surveyed 2,200 men who had attended fertility clinics in preparation for their wives’ first in vitro fertilization (IVF) cycle. Lauren Wise, Associate Professor of Epidemiology, along with a team of researchers interviewed each participant using a detailed questionnaire, inquiring about exercise levels, type of exercise, general health, and medical history. Each man also provided at least one semen sample. The results initially revealed that exercise levels had no significant impact on sperm quality and quantity.

However, when the researchers looked more closely at specific forms of exercise, they found that men who bicycled for five or more hours a week seemed to have a low sperm count and fewer motile sperm than men who did not exercise at all, or those doing other forms of exercise other than cycling.

The results indicated that less than a quarter of the non-exercisers had a low sperm count, compared to 31 % of the avid cyclists. In addition, 40% of the bicycle riders delivered sperm samples showing low motility. Volunteers who logged in excess of 300 km each week on their bikes showed less than 4% normalcy in sperm morphology. Doctors consider this value as indicative of a potentially poor outlook, often leading to serious problems with fertility.

Authors of yet another research study revealed, “Bicycling has been linked to genitourinary problems, including nerve entrapment syndromes (50%–91% of cyclists), erectile dysfunction (13%–24%), and other less common symptoms. Our findings warrant confirmation in larger studies of moderate bicyclers and men from the general population.” Cycling may also increase the risk of prostate cancer in males over the age of 50.

Too Much of a Good Thing?

Many sports enthusiasts erroneously embrace the adage “If some is good, more is even better.” Physicians who deal primarily with male health caution against excess as well. “Exercise will boost testosterone, though certain types of exercise increase testosterone more than others,” says Dr. Richard Jadick, a Piedmont urologist.

Exercise raises testosterone due to its ability to promote hypertrophy. The greater amount of lean muscle mass a male athlete builds, the higher his testosterone levels.

“Chronic endurance exercise — such as cycling or running for hours — has been shown to decrease testosterone,” says Dr. Jadick. “High-endurance athletes tend to have higher levels of cortisol, which has the opposite effect of testosterone. The more endurance exercise you do, the more likely you are to break down muscle tissue.” Lower testosterone, in a domino-like fashion, leads to potential male fertility concerns.

Bicycling may affect sperm health as a result of increased heat and impact to the scrotum. For those men who prefer tight-fitting undergarments as opposed to the looser fit of boxer shorts, elevated scrotal temperatures could pose a significant concern, since higher testicular temperatures seem to positively correlate with fertility challenges.

Friction and impact resulting from extended amounts of time against a hard, poorly designed bicycle saddle can cause mechanical trauma to the testicles that may negatively impact fertility.

One research protocol examined scrotal abnormalities in 85 healthy men who mountain biked for at least two hours per day, six days per week. Data revealed abnormalities in 94% of the men, with 81% showing scrotal calculi (hard, moveable deposits in the lining around the testicles), 32% exhibiting testicular calcifications, and 11% with varicoceles (enlarged veins in the scrotum), a common cause of reduced sperm production and infertility. In the control group of non-bikers, testicular abnormalities were found in only 16% of subjects.

Dr. Ferdinand Frauscher presented these most recent findings at a conference of the Radiological Society of North America. “We believe the microtrauma from shocks and vibrations are the major reason for the resulting testicular vascular damage,” said Frauscher, a Uroradiologist at University Hospital in Innsbruck, Austria.

Cyclists concur that trial and error seem the key to finding a good seat/saddle. “The saddle is the worst part of the bike, always has been, always will be,” said Jim Hasenauer, a Board member of the International Mountain Bicycling Association. “I know guys whose garages are full of saddles. It can be like trying to find the holy grail.”

In recent years, bicycle manufacturers have paid attention to the men’s health and fertility concerns of avid cyclists, creating new ergonomically designed saddles in an attempt to more evenly distribute a rider’s weight. The goal of offering comfort as well as alleviating pressure on the perineum drives their research and design efforts.

The Other Side of the Argument

As scientists often find, for every lab putting out certain data, other research exists to contradict it. A cross-sectional population study of 5,282 male cyclists, conducted as part of the Cycling for Health UK study, showed findings quite different from the aforementioned statistics. They found no association between the amount of time spent cycling and erectile dysfunction/ infertility, disputing the existence of a simple causal relationship. However, the amount of time per week of recreational biking in men ages 50 and older aligned directly with an increased risk of prostate cancer.

Given that this particular exercise seems to harbor the potential to negatively affect men’s health, cyclists may choose to prioritize not only mileage but also sufficient rest between training sessions. As personal trainers and coaches, we can remind riders that this practice not only allows muscles to replenish glycogen and energy but might also ensure that their sperm health remains intact.