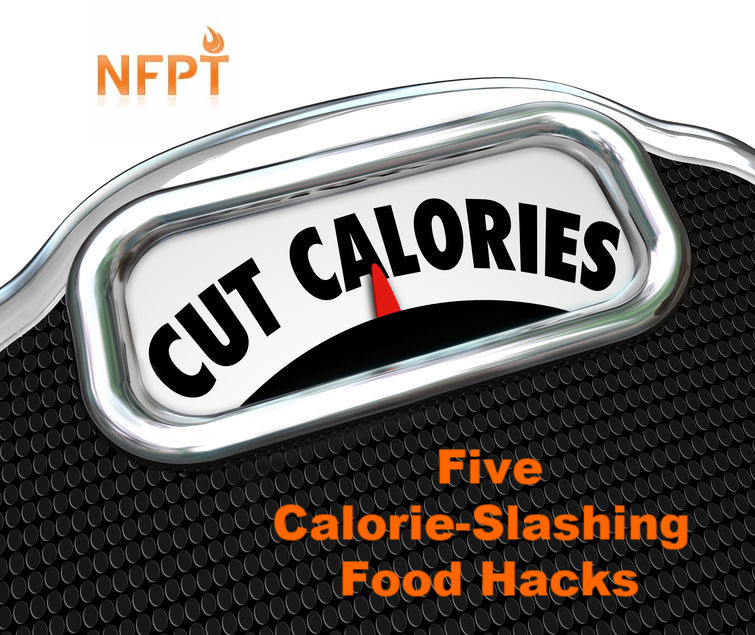 Who doesn’t love a good hack, especially when it can reduce the calorie tally of the fat loss client’s day? So often there are hidden culprits in a seemingly balanced diet that can be eliminated without any loss of food satisfaction, and it’s simply a matter of finding them! Here are five calorie hacks that are sure to reduce intake you never needed in the first place:

1. Houdini your H2O. Making water consumption central to a day’s goal is a habit well worth forming for many reasons. But, getting into a habit of drinking a full glass of water before every meal will help curb appetite, reducing the volume of food consumed overall with the same degree of satiety of eating more1. That’s pretty remarkable!

For even more of a thermogenic boost, drink the water ice-cold: studies have indicated that the body must expend a bit more energy trying to warm that water up to body temp, about 7-9 calories a cup2,3. So, if you drink the recommended 6-8 glasses of water a day, you can subtract an extra 70 calories from the day’s tally. Do that every day and you’ve burned an extra 400-500 calories a week, just by drinking cold water!

2. Dressing or dip? This is one of my favorite calorie hacks. We’re all pretty used to ordering our dressing on the side these days lest our food prep folk douse our healthy meal selection with hundreds of calories we neither want nor enjoy. But have you ever gotten your little cup-on-da-side and accidentally dumped the whole thing anyway? A typical “little tub” of dressing on the side is about 2 0z. That’s a whopping 290 calories for the average ranch!

You probably only want to put half of that on your salad to begin with, but that’s still 145 calories that can be whittled down even further with this hack: Dip your empty fork in the salad dressing to coat the fork tongs and then stab your bite of salad. Make it a small-ish bite and you’ll get the essence of the dressing flavor with far less volume. Eat your entire salad this way and you’re unlikely to consume more than a tablespoon of dressing, which is half of that 1 0z you would have poured on yourself. Congrats, you just saved 72 calories!

3. Hold the cheese (or slash it) One 1-0z slice of cheddar cheese can pack as much as 115 calories, converting what would be a modest turkey sandwich into a heartier meal. And that’s only if you’re adding one slice (Raise your hand if you add two slices!). Plan on an extra 230 calories for doubling up on the dairy. See if your client can’t do without the cheese altogether and instead add fresh herbs like thyme or oregano, or even a spicy mustard (zero calories) to make up for the lost punch of flavor. If that is a compromise that she’s not willing to make, suggest lower calorie cheeses like Swiss or Provolone which are closer to 105 or even 70 calories, respectively, depending on where you purchase. She HATES Swiss? (I really, really do) Suggest “lite” cheese varieties of cheddar, for instance, or opt for deli-fresh thin slices that can save up to 40 calories a slice.

4. Roll it up! Since we’re on the topic of sandwiches perhaps ditching the sliced bread might be the best thing since….well, you know! Although there are lots of calorie ranges out there, each slice of bread can be as little as 80 calories (for low-carb or thin-sliced breads) or as many as 130 (for heartier selections like sourdough). Use two slices and—-you guessed it!—-you’ve doubled the calories and are in for more than one serving size.

For those unwilling to sacrifice their carbs (and most really shouldn’t completely) suggest either using one slice of bread and cutting it in half to make a really fat sammy or trying a slightly less calorie-dense tortilla wrap weighing in at around 110 calories per round (you only need one). The calorie-conscious client can also opt for the even-more calorie-reduced flat wraps on the market that might not be quite as tasty but will save another 30 calories from lunch.

5. No Eggs-cuses. Why are we so all-or-nothing when it comes to whole eggs and egg whites? When an egg-white omelette sounds a bit unappealing (what with all the missing richness of the yolks), it’s not a bad idea to blend one whole egg with the equivalent of four-five egg whites to add some satisfying fat and plenty of extra protein while still slashing caloric content. If your weight loss client is accustomed to four, whole large egg omelets (I know I am!) they’re looking at about 370 calories before adding in anything else (that’s including a cooking fat like oil or butter). But if you substitute three of those whole eggs with the same volume of egg whites, you can save 200 calories without batting an eye or sacrificing the palette.

Let’s Do the Calorie Math

Assuming the best case scenario, that none of the above calorie hacks have been in place and someone was to add them all to their everyday routine (assuming omelets, sandwiches, and salads were a daily occurrence) and if the maximal number of calories were being spared as described in each calorie hack, then one could save an extraordinary 550 calories a DAY! That alone is enough to create the calorie deficit recommended for healthy weight loss (for most folks), and you’ve barely changed your food preferences at all.

Now, this is not at all a license to abandon the goal of eating a healthy, balanced diet rich in fruits and vegetables and low in added sugars and saturated fats. On the contrary, that should always be the priority! Paying close attention to the body’s cues and eating intuitively while pursuing healthy and satisfying meals is a recipe for lasting lifestyle changes. But, for the client struggling with meal-planning or even exercise, there’s nothing wrong with suggesting a few work-around calorie hacks to help realize those weight loss efforts without feeling deprived.