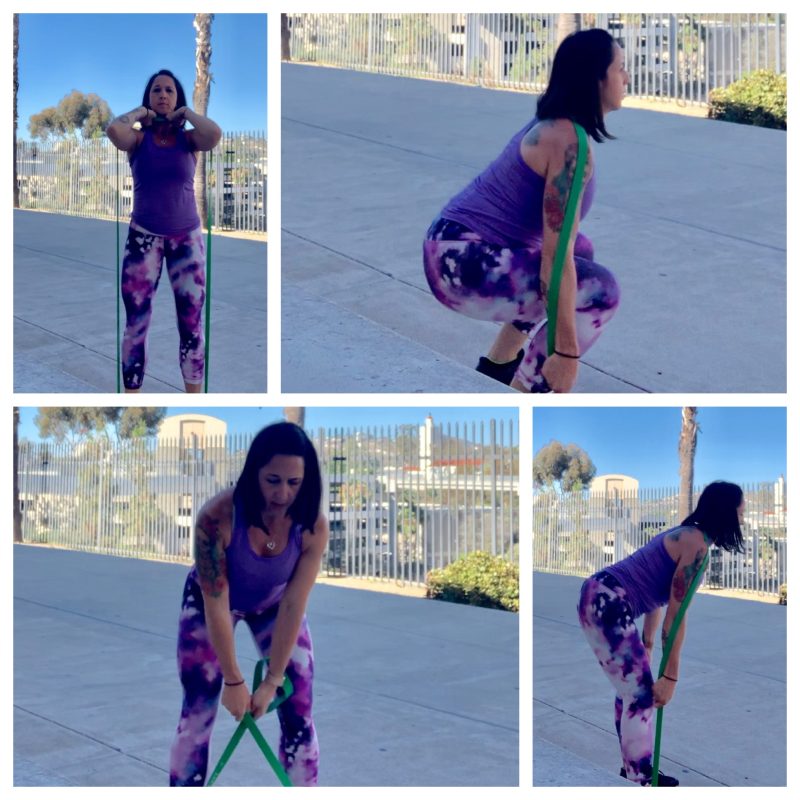 Summer is officially in full swing, which means many of my clients and I have been on the road traveling. The first thing I suggest packing is a collection of resistance bands because wherever we go, we can get a great workout in just using the bands.

*These 5 exercises are planned with looped resistance bands but can be done with traditional bands with handles.

-Stand with feet hip width distance on one end of the resistance band and place the other end of the loop around the shoulders.

-Squat with good depth. That’s it!

*If you get sweaty, the band may slip towards the neck, which can be uncomfortable. In this case, add a towel around the upper back.

-Stand on one end of the resistance band with feet hip width distance and hold the other end on the front rack position.

-Hands in front of the shoulders, elbows high, with upper arms parallel to the ground.

*Remind clients they may feel more quad activation in the front squat compared to the back squat.

-Stand with feet on the resistance band hip width or wider, knees soft, criss-cross the band in your hands.

-Keep tension on the band.

-Hinge the hips forward with partial flexion in the knees, allowing upper body to come parallel to the ground.

-Return to standing by driving through the heels and squeezing the glutes.

*Lower hand placement will create more tension on the band, and thus, more muscle recruitment in the core, upper, and lower body.

-Stand with feet on the resistance band hip width distance and place the other end of the band around shoulders.

-Bend the knees slightly during the descent and hinge from the hips until the torso is parallel to the standing surface. Return to standing position.

-Stand with feet on the resistance band hip width distance, knees soft, and hands securing the band about waist height.

*To add variety step diagonally forward and back, too.

(I added this one because I think it is important to move in more than one plane of motion).

Programming these movements into some kind of metcon, circuit, or interval training can really create a great workout. My favorite new protocol lately has been a reverse ladder set of 10 decreasing rep rounds: 10, 9, 8, 7, 6, 5, 4, 3, 2, 1.

What twists can you think of to incorporate resistance bands into a lower body workout?