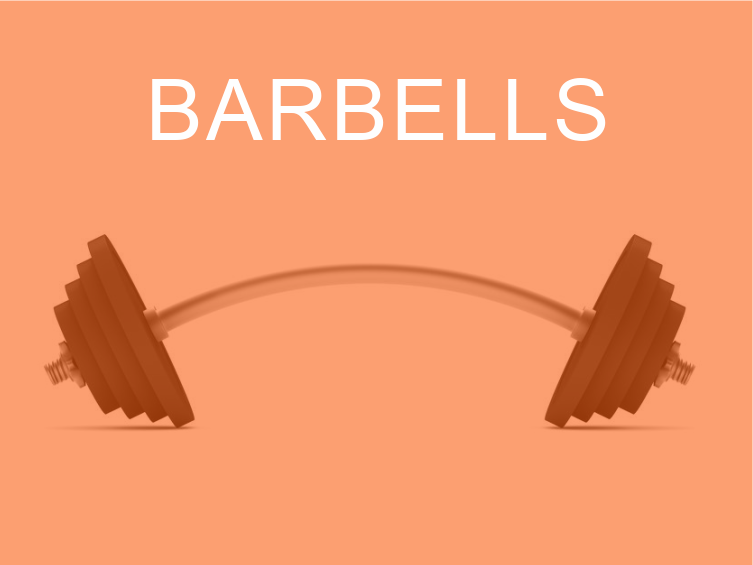 If you are a fitness professional fortunate enough to work in a facility with a variety of barbells you no doubt have discovered that they are not all created equal. If you aren’t accustomed to working with heavy lifts yourself, you should get acquainted with them and the equipment required before programming this kind of work out for your clients.

Similarly, if you’re used to using a barbell for a bench press and that’s it, then you may not be familiar to the other tools at your disposal, what they’re best used for, and who they’re most appropriate for. Let’s break it all down!

The designation “standard” is already a bit of a misnomer as you’ll find out. “Common” would probably be more befitting. The power barbell variety is what you will see in most gyms on the bench or squat rack. It’s used for hypertrophy and moderate strength training or powerlifting, and therefore can manage from 500-600 lbs of weight, generally speaking. Most power bars measure at 7.2ft (2.2 meters) long and are generally around 44 lbs (give or take a pound) or 20 kilograms.

But there’s still some variety in these “standard” bars so that they can be used optimally for different lifts.

Those that are best for squatting will have knurling, the textured pattern to improve grip, right in the middle of the bar so it doesn’t slip off a sweaty back. Like the bench press bars there’s also knurling for hand grips at aroud 32″ apart. Squat bars also are mostly rigid but do have some “give” (known as whip) in comparison to the sturdy bench press power bar. I will venture to say most gyms will use these interchangeably and will go unnoticed by most. These barbells are just as often used for an overhead press at the squat rack.

Those designed for a bench press are the most rigid for a stable lift and have smooth rings towards the sleeve of the bar for aligning your hands for a bench press. They are also a bit thicker at 29mm and sometimes heavier at 55 lbs. There won’t be center knurling on these bars.

When the motive is to powerlift and achieve the most weight with one rep, it is advantageous to the lifter to have a bar with greater whip. The first inch of a from-the-ground deadlift is the most difficult. A heavily loaded bar with additional whip will permit the lifter to leverage the slack of the bar first, creating some momentum to lift the remaining weight of the floor. The diameter of a deadlift bar is also thinner than other power bars at 22 mm. The knurling will also be more gnarly so you don’t lose grip as easily.

If your intention is to deadlift for reps, then using this bar will actually be more difficult as the whip will create more instability and therefore will be harder to control.

As you might expect, a women’s bar is shorter, lighter, and thinner for smaller hands, coming in at 25 mm diameter, 33 lbs (15 kilos), and 6.6 feet. These bars aren’t always available at a gym, but if they are, they can definitely come in handy for anyone just starting to work with barbells or lift heavy. And not just women or teenagers. The weight of a standard power bar might be too much for an overhead press, making this smaller bar a great starting point.

To make matters more confusing, these bars are designed for Olympic lifts like the clean & jerk and snatch, which are techinical “power” movements. It’s important to note that powerlifting and Olympic lifting are two different things. The former endeavors to lift the maximal weight possible and are generally slow controlled movements. The latter are meant to move the greatest amount of weight quickly.

The biggest difference between Olympic Bars and Power Bars is the greater movement, or whip, that an Olympic bar allows.  The extra movement makes the bar easier to catch during fast exercises. They also don’t have any knurling in the middle since they aren’t used for back squats. Additionally, the Olympic bar sleeves spin more than power bar sleeves to prevent wrist injuries when catching a heavy bar; this permits the weight plates to spin with momentum rather than the bar itself.

The Trap or Hex Bar

This bar is one of my personal favorites. Named for the intention of carrying heavier weights than dumbbells allow, a trap bar allows the hands to carry the weight along side of the body rather than in front—an ideal position for shrugs. But distributing the weight this way makes the hex bar an excellent alternative to a power bar for deadlifts and squats, especially for those with back pain or injuries. Holding the weight laterally shortens the moment arm to the spine and transfers the weight closer to the hips. The more-squat-than-deadlift form of deadlifts with a hex bar also places hands in a neutral position allowing for less glenohumeral joint and better grip than a standard deadlift. The handles are also higher on a hex bar which reduces the range of motion allowing more weight to be lifted.

A shorter, lighter bar at 15lbs, most gyms have a curl bar at a preacher bench. As you might expect, the curves in this bar are designed to place the hands in an optimal position—slightly more neutral than supinated— than a straight bar can allow for performing bicep curs. But don’t limit yourself to curls; the EZ curl is perfect for lying tricep extensions (skullcrushers) and close grip bench presses.

The safety squat bar isn’t always available in a basic fitness facility, but if you see one, get acquainted with it. It’s an alternative to performing traditional backsquats that accounts for limited shoulder mobility or discomfort on the back squat. If you or a client is accustomed to performing back squats these can take some getting used to.

This funky little bar is also shorter and lighter than other power bars, as it’s designed for upper body exercises keeping the hands in a neutral position.

The knarling on these barbells can vary in shape and intensity, but either way, hands that have never held a bar will get irritated. And over time will build callous that make the bar handling less uncomfortable. Some heavy lifters and general fitness enthusiast wear gloves both to protect the skin and to improve grip. Others swear by chalk and consistency.

How you load a barbell matters quite a bit so be mindful not overlook plate loading. ALL Olympic lifts should be loaded with the rubber bounce plates that are all of equal diameter. These can be dropped on the floor without damaging the bar. The regular power bar plates are made of steel and should never be dropped on the floor.

Always load a barbell evenly from one side to the other. In other words, don’t put four 45 lb plates on one side before loading the other. And always use the sleeve brace even with light weight!

Barbell work may not be appropriate for every client but every trainer should have a familiarity with all gym equipmet at minimum and a working knowledge at best. Working them in to your programming can provide surprising and positive results for those willing to give barbells a try!