Ratings of Perceived Exertion (RPE) are a measure of intensity that is determined by the way someone feels about how hard his or her body is working.

Effort, discomfort, and fatigue are all sensations one might use to report how intense a particular exercise or session is.

Put simply, RPE is a subjective measure of how hard you feel like you’re working during a set, exercise, etc. Many of our clients will try to tell us they are working as hard as they can when we believe deep down that they are capable of one or two more reps, or just a little extra energy output. The uniformity of such a scale allows professionals and clients/athletes alike a way to put a number to their perceived efforts. 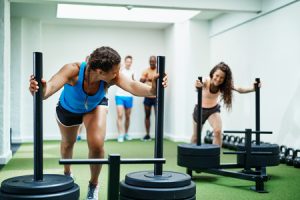 Very often, the amount of weight being lifted/pushed by a client is not so heavy as to elicit the perception on his/her part that the load is unmanageable. This feeling is referred to as the “internal load”. There are a multitude of reasons why an athlete may experience a higher “internal load”, or RPE, than the trainer thinks is warranted:

RPE caters generally to people who love data, or those desiring to be both the coach and the athlete with regard to their workouts. There is a certain power in the feeling of control and precision overtraining that can often exhibit performance peaks and valleys.

Getting The Most From Your Workouts

In the absence of observing the rate of perceived exertion during a workout, it is possible for a client to under-train on certain days when a heavier load might have been achievable, and likewise to over-train on days when the mind and/or body simply is not properly engaged due to aforementioned factors. RPE’s therefore allow the customization of every training session, ensuring that the athlete is deriving the maximum payback that the body can generate.

When a coach or personal trainer asks athletes/clients how they feel versus prescribing a particular weight load to be lifted, it immediately engages and empowers them in the process. Many clients appreciate having a teamwork-type alliance with their trainers, and upon implementing the RPE system, discover a sense of being partners in the training journey.

For those of us more accustomed to an old-school training paradigm, a progression such as this might seem familiar:

While this method certainly allows for a natural loading increase, a missing aspect is mastery over how one feels about the intensity of the sets. In comparison, this is what the same 4-week training cycle may look using RPE’s:

While these protocols may seem to achieve an identical end result, the difference lies in the flexibility of the process, offering a client/athlete the ability to increase or decrease intensity based upon how he is feeling on a given day. This allows for training hard as well as prudently, always respecting the body’s reactions to everyday life events.

For runners and other endurance athletes, the rate of perceived exertion (RPE) is a valuable tool. The use of RPE, in this case, allows for self-regulation of one’s efforts. For example, running a prescribed distance at a “moderate pace” may translate to an RPE of 5 or 6 on a 10-point scale. Determining the value of the RPE system for resistance training, however, is a more complicated matter.

To embark upon this, a group of scientists measured the strength and endurance of 80 college-age athletes (55 men and 25 women) who participated in a variety of different sports. Subjects had varying amounts of experience with resistance training and were divided into three groups:

Group 1 -Highly trained athletes (29 men and 10 women), with an average of 24 strength workouts in the last three months.

Group 2 -Moderately trained athletes (26 men and 8 women), with an average of 9 strength workouts in the last three months.

Prior to embarking upon the study, the novices received technical training in bench press technique. In the first session after the training, researchers tested the 1RM bench press for all participants. As one would expect, bench press strength correlated directly with training experience and gender. In a second session, one week after the first, participants tested their maximum reps at both heavy (about 90% of 1RM) and moderate (about 67% of 1RM) loads.

The results from the first two sessions were used to assign weights and repetitions for the third session, which tested RPE. A week after the second session, participants performed a total of four bench press sets: two sets at low reps, with heavy and moderate weights, and two sets at high reps, also at heavy and moderate weights. They were then asked to report their RPE based upon a standard 10-point scale. The subjects were unable to see the amount of weight being lifted, making this a true blind testing format.

For low reps, the study found no relationship between RPE and gender, total load, or absolute intensity (% of 1RM). However, in the highly trained group, there was a correlation between RPE and relative volume (% of maximum reps at that weight). This same relationship was not observed in the other groups. The researchers suspect that more highly trained individuals either receive more sensory feedback or are more able to interpret the sensory signals that they receive.

In the high rep sets, this effect was seen in all three groups. Higher relative volume led to increased RPE.  This leads one to believe that the predictive value of RPE increases with volume for resistance exercise. Utilizing RPE as a tool for self-regulation seems therefore to be more applicable in sessions involving higher repetition ranges.

When utilizing the original Borg Scale of 6-20, perceived exertion ratings between 12 and 14 suggest activity performed at a moderate level of intensity. As one gains experience in monitoring how the body feels during exercise, he becomes more attuned to when an adjustment in intensity should be implemented. For example, a walker who wants to engage in moderate-intensity activity would aim for a Borg Scale level of “somewhat hard” (12-14).

If he describes his muscle fatigue and breathing as “very light” (9 on the Borg Scale), he may choose to increase his intensity. On the other hand, if he felt his exertion was “extremely hard” (19 on the Borg Scale) he would need to slow down his movements to attain the moderate-intensity range. In later years, the 6-20 scale evolved into the more precise method of rating exertion on a 1-10 scale, which is widely used today.

It is interesting to note that there exists a strong correlation between an individual’s perceived exertion rating times 10 and his actual heart rate during physical activity. For example, if a person’s rating of perceived exertion (RPE) is 12, his heart rate tends to be roughly 120 beats per minute. While this value is simply a close approximation for an average athletic individual, heart rates can vary quite a bit depending on age and physical conditioning. The Borg RPE chart is also the preferred method to assess intensity among those individuals whose medications might affect heart rate or pulse.

The Advent of Autoregulation

It is important to remind ourselves why “autoregulation of training” using the RPE scale is a worthy pursuit: such a paradigm theoretically allows for attaining the most out of every workout session, whether a client is feeling greatly empowered or has suffered through a poor night’s sleep. By adjusting the load based on perceived difficulty as opposed to fixed amounts of weight increases, one can still complete a rigorous workout feeling accomplished instead of defeated.

In this sense, use of the RPE system might lead to a decrease in performance-related stress during a workout. At times when the client feels more rested, he will display better form as he pounds out higher volumes and heavier loads. On days when the mood, energy or biorhythms are suffering, he feels justified in simply doing what he can and moving on.

Ultimately, using RPE is about flexibility and control. However, this technique will not suit every athlete. Since this approach to training is considered more cerebral, the client might be the kind of person who likes things laid out with a directive.

He may want to arrive at the gym knowing you will tell him how much to squat, and how many times to perform the squat. Another consideration is that the Borg scale is less than ideal for those training at lower intensities or higher repetitions, since the question of whether or not just 1 more repetition might have been performed always looms large.

Have you incorporated the Borg RPE format with your clients?