Can Arnica Assist With Muscle Soreness and Injury?

Everyone experiences at least minor aches, pains and bruising, if not outright injury or trauma at some point in their lifetime, making expeditious and complete healing a priority for many people, including our fitness clients. While there are the proper steps to take when an injury first occurs, such as icing and rest, there are products on the market that claim to speed injury healing and reduce pain, of which homeopathic arnica is the star player. But does it really work, and if so, how well? 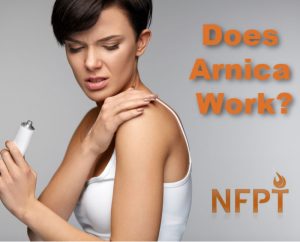 Most products that contain arnica are homeopathic in nature. So let’s be crystal clear on what homeopathy is:

According to the American Institute of Homeopathy, it is a practice as old as Hippocrates himself that takes the whole of the person into account to treat illness naturally. The word itself, rooted in Greek, means, “like disease” because its guiding principle is similia similibus curentur: “let likes cures likes”.

Dr. C. F. Samuel Hahnemann (1755-1843) was the first to make homeopathy into a system of medicine by using himself and his patients as guinea pigs, and came up with a catalog of over 2000 substances that he qualified as medicinal remedies. He found that administering full strength medicines came with side effects, and so came up with a complex process of dilution. The more diluted the substance the more potent the remedy and therefore, greater therapeutic effect with the least side effects.

One remedy would be prescribed for a patient based on physical, psychological and emotional factors in order to stimulate the healing process, who is then monitored for signs of improvement. Another remedy might be selected if no improvement is seen.

The true nature of this process even today involves a practitioner of homeopathy conducting a comprehensive interview to take all factors of the suffering individual into account and prescribe the medicine, or remedy, that exhibits the same kind of features as the illness itself: “let likes cure likes”.

That might seem bizarre and counterintuitive, but that’s not far off from what vaccines are designed to do: A weakened preparation is thought to stimulate the body’s natural healing response. These remedies are available over the counter and are recognized by the FDA.

So while few people actually consult with homeopathic doctors (I have, for the record), it is not uncommon to self diagnose based on symptoms and apply a remedy that you hope will help. Because of the dilution, there is little risk in making failed attempts. Arnica is by far the most well known homeopathic remedy out there and probably because people believe it works.

My Personal Experience with Arnica

I first learned about arnica when I was 19 and was undergoing surgery. My surgeon, who was most certainly a Western medicine doc and not one known for alternative approaches as far as I know, told me to invest in homeopathic arnica, both in oral pellet preparation and as a topical ointment. He informed me that this would speed healing and reduce bruising associated with my surgery. He mentioned nothing of pain reduction, however.

I immediately obliged the request and went out hunting for arnica. I recall purchasing the Boiron brand signature blue vial of the homeopathic preparation of arnica montana with a strength of 30c. I also found a topical cream, whose brand name I don’t recall. What I do remember with some clarity was taking it as recommended on the directions and then watching the purple bruises fade into a sallow yellow practically overnight.

But most remarkable and unexpected in my memory of this recovery period was that I never took a single Percocet that was prescribed for the pain. In fact, I never felt even a minor twinge of pain and just thought I was lucky. I didn’t even think to attribute this positive outcome to the arnica until years later when I learned that was part and parcel of its performance.

A decade later when my mom had to have foot surgery, and by this time I had done additional research into arnica and homeopathy in general, I helped her prepare for the even by having her take arnica montana 200c strength—a formula diluted even further than the average preparation and intended to assist in more traumatic injury repair, such as breaks and surgery—before her surgery, and then during her recovery period. Not unlike my own experience, she also felt no need to take the prescribed pain meds, and despite having had her toes repaired, was able to put weight on her foot sooner than her surgeon expected.

Over the years, I have not been without some form of arnica in my medicine cabinet and have used it for bruises (which I get way too easily), sprains, muscle soreness and pain. There are different topical ointments and creams out there that combine other ingredients as well presumably for a synergistic effect.

As you would expect, there’s not a ton of research on a substance that isn’t going to make anyone a ton of money. If the pharmaceutical companies can’t capitalize on it, then it won’t get as much fanfare. However, there’s a respectable number of studies and experiments studying the effects of arnica in different categories, and naturally, the results are mixed.

When it comes to plastic surgery, the results seem to be more clear. A 2006 randomized, double-blind study compared the effects of arnica versus a placebo in patients recovering from a face-lift. Using a novel computer model, they compared photographs of post-operative healing to observe changes in bruising. While there was no subjective differences noted in the visual assessments by either patient or doctors and no objective color changes according to the model, the arnica group did have a smaller area of bruising post-operatively than the control group.

Also, a 2016 experiment pitting arnica montana against a placebo on rhinoplasty (nose job) patients compared post-operative bruising using objective measuring tools like imaging software. They found that the arnica patients had significantly less bruising, both in color and in extent, at 7 and 10 days post-surgery.

Still a 2007 found that arnica was no better than corticosteroids at reducing swelling on day two for post-operative rhinoplasty patients yet better than the control group, and no difference among groups that day for bruising. However, arnica did fare better for swelling reduction that the control group by day 8. Overall, the researchers found that arnica did slightly better than the steroids for bruising resolution by day 8.

More remarkable was a study conducted on cancer patients undergoing a unilateral, total mastectomy. The women who took arnica had lower blood and serum drainage volumes in recovery than their placebo counterparts. However, no differences were found in bruising or perception of pain, or even the duration of the drainage.

Even the most conscientious trainer can do everything possible to prevent injury among clients, but getting hurt is simply a fact of life. Can arnica help heal bumps, bruises or other aches and pains like those associated with arthritis?

A study completed this year measured the effects of a combination arnica and curcumin patch on osteoarthritic pain and symptoms. They found the patch did have measurable positive impact but it would be impossible to say if the arnica, the curcumin or combination of both made it happen.

Researchers compared the use of oral arnica for the prevention of delayed onset muscle soreness in distance runners, but found no difference in self-report scales for pain between the experimental and control groups.

So while the research results are mixed and I think indicates more is warranted, what you will likely find is that people who have ever started using arnica continue to do so. I have found it personally effective for clearing bruises more quickly, but it hasn’t done much for my back pain or DOMS, and it definitely won’t help with trigger point pain. My experience with surgery was remarkable resulting in no need for pain killers, but when I took arnica during labor with my second child, I most certainly did not note a diminished perception of pain. Although it’s worth mentioning that I also did not take any other medications or analgesic treatment during the birth process.

Homeopathic arnica is not the only preparation of the herb available. There are topical and oral versions that are not diluted that seem to have similar results reported. Research recruiting sufferers of knee osteoarthritis were given a full-strength (not homeopathic) arnica gel to rub on their affected joints twice daily for three weeks reported significantly lower pain and better functionality. However, the results are weakened by the lack of a control group.

A reminder that designating a substance homeopathic, holistic and/or natural does not nullify risk is in order here. Arnica, in particular, is a member of the Asteraceae family of plants—like daisies—and a not uncommon allergy. Folks with this allergy should most certainly avoid using any products containing arnica.

Aside from that, it might be worth giving arnica a try for peri-surgical and post-surgical pain, bruising and swelling symptoms, but maybe leave it behind for post-workout discomfort. Certainly, products like Bio-freeze contain a menthol agent along with arnica that certainly can provide relief to muscle stiffness and soreness, so it might not hurt to make the suggestion to sore clients. If nothing else, even the placebo effect is a positive one and a welcome one when recovery is a priority!

Michele G Rogers, MA, NFPT-CPT is our blog editor/publisher and has been a fitness professional for 17 years, inspired by a lifetime passion for all things health and fitness. Her professional mission has been to raise awareness and guide clients to achieve a mind-body connection, helping them live and move more efficiently. A chronic back pain sufferer for decades and becoming a mom of two prompts her training approach to emphasize corrective exercise and progressive programming. Follow Michele on Instagram .