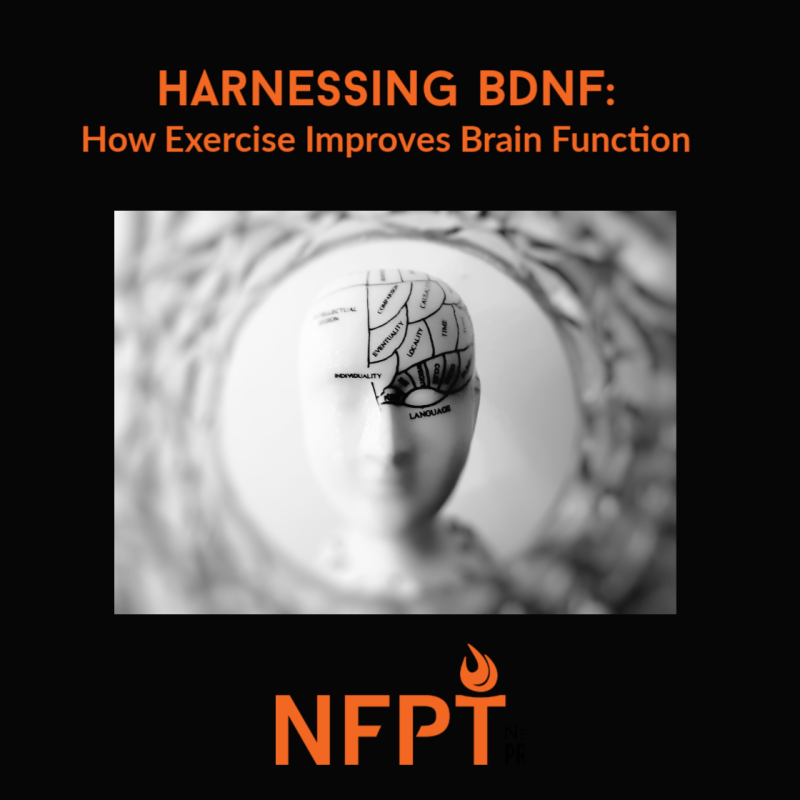 Personal trainers are so much more than fitness coaches. We all know that the effects of exercise are far-reaching when it comes to overall health and wellness, and science is revealing more and more every day. Most compelling is how much exercise, and specific ways of exercising especially, can impact brain functioning. Brain-Derived Neurotrophic Factor (BDNF) is a protein that promotes the survival of nerve cells by playing a role in the growth, maturation, and maintenance of these cells; it has been shown to be released after even one short bout of exercise.

BDNF is a protein in your brain that is connected to a series of molecules and neurotransmitters. We can measure its effects in the hippocampus, the part of the brain related to memory retention. BDNF helps improve cognitive function and even works to alleviate depression and anxiety-related symptoms. The direct connection between exercise and BDNF function isn’t clear, even to scientists; however, if you think of the brain as just another organ in the body, then you can infer the relationship between the two. Just as your muscles and internal organs are positively impacted by exercise, so too is your brain. Exercise increases the amount of BDNF released in the brain.

BDNF has also been associated with a reduction in symptoms of anxiety and depression, as is regular exercise. It is hypothesized that exercise alleviates anxiety by simulating a “fight or flight” response that results in “pretend” danger. In other words, exercise tricks your body into thinking you are being threatened. (The same can be said for anxiety, which is what prompts overactivity in the brain and unpleasant physical symptoms like sweating, trembling, and tightness in the chest.) However, as you exercise, allowing time for breaks and a cool-down period, it becomes clear that there is no true threat. Exercise can help release the pent-up energy related to anxiety and it can train your body to recognize when something is not a true threat.

This interesting protein can also minimize the side effects of depression. Along with this brain-health protein production, the neurotransmitters endorphins and serotonin are also released, which are known repressors of depression.

BDNF production and neuroplasticity (also induced by exercise) has been known to delay age-related degenerative diseases like Alzeimher’s and Huntington’s Disease. It improves cognitive functioning overall, especially for older adults.

What specific modalities or types of exercise influence BDNF the most? Several studies indicate that certain exercises are more effective than others are producing this powerful protein.

Another study specifically tested HIIT exercises and the production of BDNF and found that the protein increased in test subjects once they had completed the exercise routine. In fact, it increased after just one HIIT session. However, this particular study also found that general physical exercise was also enough to increase levels.

This particular study measured BDNF after the test subjects rowed “to the point of exhaustion,” after about four hours. This experiment concluded that, while BDNF does increase during exercise, it peaks during the recovery period. During the experiment, test subjects were instructed to lay down in the supine position for an hour following their 4-hour rowing session. It was then that the spike was measured.

In all of the above studies, some time was allowed to pass before BDNF was measured in the bloodstream. A cool-down period, then, seems vital to production. While general exercise is enough to increase BDNF in general (improving brain function and keeping emotional disorders and degenerative diseases at bay), the recovery period enables BDNF to flourish.

In tomorrow’s blog article, I’ll provide some programming ideas to incorporate exercise that will help maximize the effects of BDNF and contribute to your clients’ overall brain health.

Daniel has been involved in the fitness industry for over ten years and has owned his own private training business since 2013. His passion for health and fitness led him to get certified through NASM, NFPT, and ACSM. He also holds a specialty certification as a Certified Inclusive Fitness Trainer (CIFT) and as a Certified Autism Trainer, which allows him to train individuals with physical and intellectual disabilities. In 2013, Daniel married his beautiful wife, Trinity. A few years later, they prayerfully started Special Strong to pursue their calling of working with the special needs population. They both attend Resonate Life Church in Lucas and serve in ministry together. In his spare time, he enjoys working out, reading, and fishing.