Pre-competition nutrition programs are designed to help an individual drop fat without compromising lean muscle. The subtleties between meal plans depend to a certain extent on the division in which the client chooses to compete. Understanding the differences can help you better prepare your client for a winning experience! 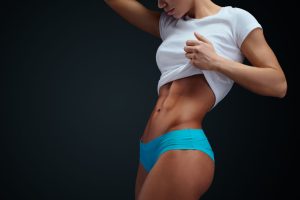 When a female client embarks upon a journey toward the competitive stage, the first step is to decide on which division she favors. Her choice determines the level of leanness and muscularity to which she must commit herself. An honest assessment of preference, lifestyle, and dedication to precise nutrition must be a primary focus. The job of the personal trainer is to explain the subtle yet important differences between the categories.

At 12 weeks out from a competition, the client begins counting calories and tracking macronutrient grams as well as eliminating processed foods, “junk foods” that are devoid of nutrition but high in calories, and simple sugars from her diet (a limited amount of fruit sugars is acceptable).

If she is a “three squares a day” individual, ease her into the habit of eating six small meals per day, each containing quality sources of lean protein, fats and carbohydrates. The importance of hydration likewise kicks into high gear, approximating a daily consumption of a gallon of water. According to the Ultimate Bodybuilding Guide, a serious weightlifter can expect to lose one pound of muscle for every three pounds of body fat. Having enough time to diet can lessen muscle loss by preventing the competitor from crash dieting in an effort to lose a large amount of body fat.

Women tend to have lower resting metabolic rates than men, according to Chantal Vella and Len Kravitz of the University of New Mexico. This means a female competitor’s calorie intake must be low enough to allow for fat loss, but not so low that hard-earned muscle gets sacrificed. A prudent first step is to drop 500 to 750 calories from her regular or bulking diet when transitioning to a contest prep diet.

If fat is not sufficiently and consistently lost, calories may have to drop even more. Conversely, weight loss accompanied by a reduction in muscle mass and strength signals the need for a slight calorie increase.

Figure athletes can consume around 1 gram of protein per pound of body weight daily, whereas most Bodybuilder and Physique competitors aim for 1.2-1.4 grams. Mitchell also recommends cutting down on starchy carbs and eating more eggs and red meat, saving the majority of carbs for immediate post-workout.

Younger females typically carry around about 25-30% body fat; older women about 30 to 35%.

Therefore, attaining the body fat levels of a Figure model (12-15%) or a Bodybuilder (5-7%) means struggling against millions of years of evolution.  The high volume of training coupled with the low quantities of food required to achieve such results becomes very stressful.  Thus, it is essential that the personal trainer or coach has a comfortable understanding of how to correctly manage such a negative energy balance.

Always manipulate the client’s diet first, slowly and gradually, before increasing her cardio. Upon initiating an increase, add 5-15 minutes to each session for the first week. Once the sessions reach 45-60 minutes in length, add in another weekly session if needed. Cardio should only be increased if one of two things occurs: the client stops losing fat for at least 2 weeks without having changed anything else in her program; or, she has dropped calories by 100-200 consistently for 1-2 weeks and still has not seen a reduction in % body fat.

The Role of Macronutrients

Protein is anabolic and muscle-sparing when the body is in a hypocaloric state. Starting at about four weeks from competition day, step up protein intake by 40% so as to preserve hard-earned muscle. If normal consumption up to this point has been 1 gram of protein per lb. of body weight each day, many Bodybuilder competitors increase to 1.4 grams, while keeping 20-30grams of fat in the diet (ideally, avocados, nuts or nut butter). Figure athletes can remain at a daily intake of 1 gram of protein per lb. of body weight.

As far as carbohydrate cycling, many options exist. The easiest method to follow while still maintaining efficiency and not experiencing too much deprivation is the carb structuring + cycling format. This dictates that daily carbohydrate intake will be higher on some days and very restricted on others.

Such a cycle, only designed to be undertaken for a short time period, can be an effective means of staving off a fat-loss plateau. Psychologically, it helps to know such days are built into a meal plan! This will help preserve muscle while rapidly shedding body fat by taking advantage of insulin, utilizing it to stave off or prevent a catabolic state without fat storage. Workouts will continue to be productive with minimum strength loss.

The purpose of a refeed, or a structure plan to increase carbs and decrease dietary fat, is to boost the actions of the hormone leptin, which is incredibly effective in burning fat. Clients can refeed once to twice per week, depending on body type and personal preference, ideally the night before a very heavy workout such as legs.

As is always the case, you and your client must lean on her knowledge of her own unique body to decide how often such a caloric and carbohydrate surge can work in her favor without stalling fat loss. When it comes to carbohydrates, much is determined by one’s body type. If a client claims to be overly sensitive to carbohydrates and tend to store fat easily, suggest she keep this number equal in grams to her protein intake. Thin-framed athletes with a fast metabolism, often referred to as hard-gainers, may choose to add more carbs to the diet. Remind clients to include ALL carbohydrate sources in the daily count, including vegetables and fruit.

To maximize muscle retention during contest prep, the client’s diet is often tweaked so as to allow for a body fat percentage loss of 0.5 – 1.0 % weekly. This means that a 110-pound female should aim for a loss to 0.55 – 1.1lbs/week.

In the later stages of contest prep, it may be beneficial to diet closer to the lower end of the range (0.5% of body weight weekly) in order to minimize muscle loss at the time when the risk of this is higher. In case studies of natural bodybuilders, those who averaged a rate of loss of ~ 0.5% bodyweight weekly retained more muscle during contest prep that those dieting to achieve a 0.7% or 1.0% weekly loss.

Dieting at a slower rate will allow a competitor to consume a greater number of calories during contest prep. As a result, performance in the gym is going to be higher than that experienced by an individual crashing down on a lower calorie intake. By maintaining training intensity and volume, she retains more muscle mass during contest prep.

The science behind such manipulation relates to how cell pump up-regulation persists from the sodium loading, even as sodium is gradually depleted. This facilitates the body’s ability to efficiently shed subcutaneous water while ensuring this occurs neither too rapidly nor unsustainably, either of which could result in ruining an athlete’s peak on contest day.

At four weeks out from a competition, start your client on a quest to cease all condiments and seasonings, except for those that are salt-free (such as fresh/dried herbs or Mrs. Dash seasonings). The following week, eggs and dairy also leave the meal plan, as both of these food groups tend to possess higher levels of sodium. Sodium cycling commences at 14 days from the show and continues until the final day(s).

When sodium intake ceases 2 days prior to the show, the body continues excreting it along with water. Since sodium has been overloaded in the previous days, the body focuses on re-establishing homeostasis, which it accomplishes by continuing to excrete sodium and consequently water at a very fast rate. The condition is maintained until the system detects through its feedback mechanisms that normal sodium levels have been reached. This typically occurs with few if any deleterious effects.

A similar theory holds true for hydration. If a competition is to be held on a Saturday, peak consumption begins on the Friday 8 days prior, with gradual decreases on Thursday and Friday of competition week. By discontinuing all drinking at least 8-10 hours prior to stepping on stage, the body will continue excreting water, similarly to that which occurs for the sodium manipulation.

This final phase is designed to allow the athlete to “peak” for pre-judging of the show. Foods that had previously been eliminated from the diet make a welcome return: peanut butter, rice cakes, honey and dried fruits. It is believed that by eating foods rich in simple sugar, the muscles absorb carbs faster, thereby achieving the desired look of fuller muscle bellies when the athlete steps before the judges.

The competition day itself possesses unique rules and strategies, including which foods to eat 6 hours, 4 hours, 2 hours and 20 minutes prior to stage time. Citing my own experience with 12 competitions, this meal plan has varied drastically, depending upon my competition coach at the time.

My greatest successes were achieved by eating 2 ounces of salmon (or 1 Tbsp. almond butter) and 4 ounces of sweet potatoes at each of the aforementioned time intervals. Twenty minutes before presentation, I also indulged in some dried fruit as well as sodium-free dark chocolate-covered espresso beans to instantly promote vascularity.

Many trainers and competitors alike believe that in the quest for success on stage, competition nutrition comprises 80% of the equation. Hard work and true grit are certainly required in the gym; however, dedication in the kitchen might just make all the difference between a 3rdplace ribbon and a 1stplace trophy.