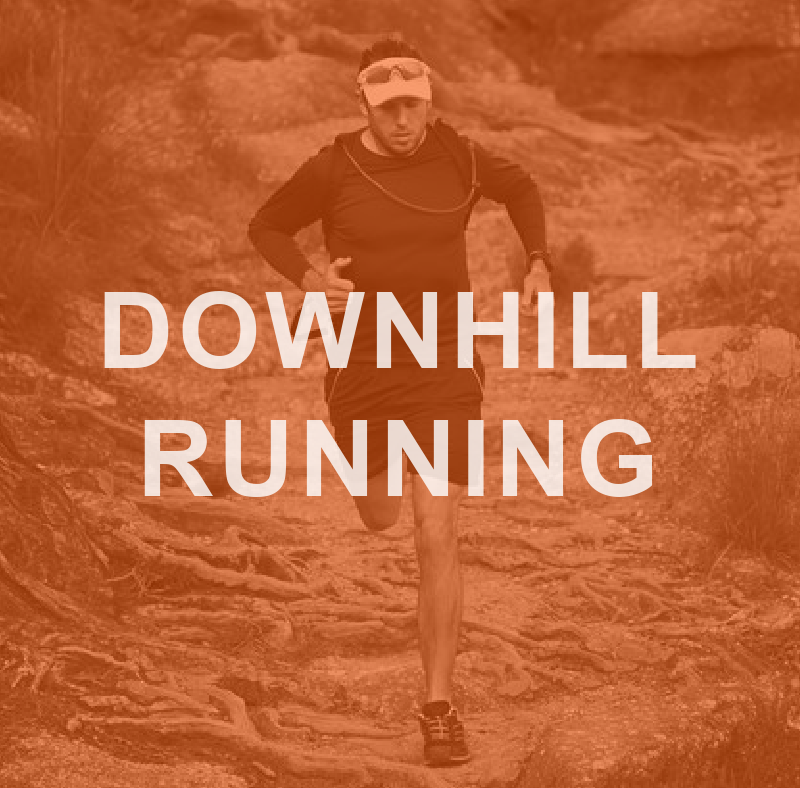 Downhill running demands a huge effort on the actions of eccentric muscle tissue. As a result, such runners often suffer from lower limb muscle damage. Prolonged exposure to downhill training as a runner’s sole workout can result in injury as well as overall performance.

While personal trainers always advocate varying one’s training protocol to prevent plateaus, shifting from level running to downhill terrain without sufficient adaptation exercises can in itself cause problems. Aside from the obvious overtaxing of eccentric muscle in the lower limbs, the different foot strike patterns and braking forces associated with downhill running can bring on neuromuscular exhaustion. Learn how to advise downhill running clients, to enhance success in both speed and strength.

What forces unique to downhill running present the greatest challenge, even to seasoned runners?

If a client seeks to improve his downhill running technique, a brief but clear explanation of the body mechanics taking place goes a long way. Since downhill momentum confers greater negative work around the joints of the legs, one must train properly to allow for progressive gains. Many runners well adapted to level terrain may find longer periods of recovery between runs somewhat frustrating. However, taking into consideration that such a plan translates to fewer injuries and less maladaptation of muscle tissues, clients may readily agree to try this training protocol.

In an effort to seek out better adaptation training strategies for runners who wish to incorporate more hilly terrain, scientists suggest first familiarizing such clients with appropriate eccentric cross-training exercises. Such a protocol can mitigate muscle damage.

Cross-training with some strenuous isometric exercises, a few days in advance of a planned downhill workout, enables dedicated runners to reap some advantages of RBE without having to experience prior muscle damage. This strategy, known as “pre-conditioning” training, works particularly well in the final stages of competition preparation.

Researchers as well as runners have observed a reduction in muscle damage when performing maximal voluntary isometric contractions 2-4 days prior to maximal eccentric exercise, a phenomenon described as isometric pre-conditioning. In one such study, 30 male volunteers ran downhill on a treadmill for half an hour. Those individuals in the experimental group executed 10 maximal voluntary isometric contractions, using a leg press machine, two days prior to their downhill run. The control group did not engage in such pre-conditioning training.

Upon assessment of muscle soreness 48 hours post-run, scientists noted a significant decrease in aches among those subjects whose training included pre-conditioning. Likewise, the experimental group recouped its isometric peak torque faster than those in the control group.

No Hills Available? No Problem

If you and your client live in an area that offers more level surfaces than hilly terrain, many exercises performed in the gym can compensate while facilitating the same types of training. Consider adding the following moves to your downhill runner’s current program ~

While significantly focusing on appropriate training exercises for downhill runners, trainers might also keep in mind overall form during actual execution of the run. Below you can find the most important aspects to stress to clients.

Remain focused on forefoot landing: encourage client to think about landing on the ball of the foot, not the heel. Some experts favor a longer stride here, while others stress the importance of a shorter stride with rapid turnover. Present both strategies to the client to see which works better.

Light landing: if a client’s foot routinely “slaps” the ground loudly, suggest mantras such as “easy landing” and “soft knees”. Over time, this may develop into the desired result and instilled habit.

Swinging arms: help clients adapt to maintaining a 90-degree bend at the elbow while gradually increasing arm swing speed. The human body’s tendency is for the lower limbs to keep pace with the swinging arms. Remind your client how gravity plays a role in downhill running and to allow the run to simply “flow”.

Scientists and fitness enthusiasts frequently seek out a supplemental “boost” to gain a competitive edge. The sport of downhill running likewise elicits such research. Most studies focus upon ways to facilitate and accelerate recovery, since eccentric exercises place such a high demand on the body’s energy and muscular systems.

Regular consumption of pomegranate juice seems to offer some advantages. Runners have observed dramatic improvements in recovery of isometric strength recovery with the addition of this juice to their diet. Scientists who tested the dose-response theory concluded that simply one daily serving of juice can greatly facilitate recovery from downhill running’s extreme eccentric exercise modality.

If trainers feel comfortable and sufficiently qualified to recommend a pre-workout or post-training beverage to clients with whom they work closely, it would appear that pomegranate juice offers much more than simply Vitamin C and an abundance of antioxidants.