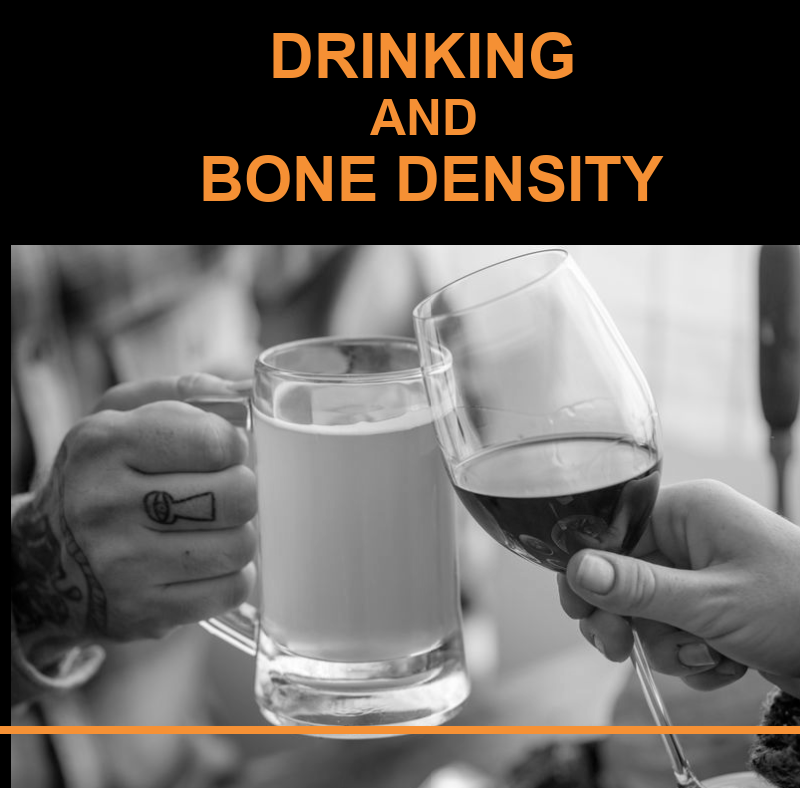 Studies have revealed that alcohol consumption plays a definitive role in the preservation of bone density, similarly to an increase in lean muscle mass. Before suggesting happy hour to your middle-aged clients, learn about this correlation and its interesting potential to delay onset of bone loss.

Osteoporosis, a degenerative disease that leads to weak bones and increased fracture risk, affects both men and women as middle age transitions to the senior years. In addition to the often-recommended increases in calcium and Vitamin D to stave off this condition, it appears alcoholic beverages might facilitate the speed of osteoblast growth (bone rebuilding) as well as the absorption rate of bone-forming nutrients.

A recent study recruited 1,697 healthy women representing a variety of life stages: 710 premenopausal, 176 perimenopausal, and 811 postmenopausal. Subjects classified themselves as either moderate drinkers, light drinkers, or abstainers, and indicated a preference for wine or beer.

Accounting for age, BMI, beverage choice, and menopause, a correlation emerged between beer intake and increased bone density. The authors of this study suggest that “The greater bone density found in women beer drinkers might be a result of the phytoestrogen content of this alcoholic drink….” Indeed, females who consumed in excess of two beers a day demonstrated up to an 8.3% greater bone density when compared to women who abstained from any alcohol. Interestingly, males consuming the same amount of beer in a day actually lost bone mass.

Many specific factors play a role in how alcohol benefits the skeletal system. In addition to the aforementioned phytochemicals, the high silicon content of beer has also been explored as a potential facilitator of bone mass.

The Journal of the Science of Food and Agriculture reported the results of research undertaken by Charles Bamforth, PhD, DSc, and Troy Casey, from the University of California in Davis. They studied the silicon content of 100 popular commercial beers, focusing on variations in ingredients as well as brewing processes. Their interest stemmed from the fact that beer boasts one of the highest levels of dietary silicon among food sources in our country.

As predicted, a link emerged between silicon content and bone health. However, David Katz, MD, MPH, of the Yale School of Public Health, stresses the following point, prudent advice for trainers to share with clients: “This is NOT a reason to drink beer…This is simply a bit of good news for those who do drink beer already….”

The results of a relatively small study appeared in the journal Menopause. Focusing solely on the drinking habits of menopausal women, the scientists noted that when women stopped consuming alcoholic beverages for two weeks, they showed increased markers of bone turnover, a key factor in the risk of osteoporosis. Upon returning to their usual drinking habits, a slower rate of bone turnover was observed.

One study published in the Journal of Studies on Alcohol and Drugs examined the association between periodic episodes of heavy alcohol consumption and the bone density of college-aged women. The scientists defined “heavy episodic drinking” as imbibing more than four drinks during a 2-hour window, on over 115 occasions since entering high school.

Similarly, men aged 30-59 years of age consuming over 14 drinks in a 7-day period experienced more than double the risk of hip fracture compared to those individuals who limited their alcohol intake to 1-6 glasses per week. The same risk level did not surface among other age groups, even among subjects who drank regularly. Compared to women with moderate or frequent alcohol use, those who abstained or occasionally drank had the highest fracture risk.

The results of a 2008 study, published in the American Journal of Medicine, showed that individuals enjoying a daily cocktail had a diminished risk of hip fractures. Research performed in England revealed that women over the age of 65 who consumed in excess of five drinks within a 7-day period suffered fewer vertebral deformities than those who had one drink per week.

The outcomes of multiple studies worldwide confirm the same conclusion as observed in American individuals. In 2017, the Korean National Health and Nutrition Examination Survey undertook an evaluation of factors contributing to osteoporosis. In addition to other relevant risk factors, researchers looked closely at the link between alcohol intake and bone mass. Recruiting postmenopausal subjects of South Korean origin, they found light intake of alcoholic beverages (a few times a week) correlated to a higher femoral bone density than that seen in drinkers at both ends of the spectrum, non-drinkers and those who consumed heavily. In each of these cases, a 1.7x higher risk for osteoporosis was determined.

Seasoned personal trainers often field client inquiries about nutrition and lifestyle habits as influences on overall health. We address questions of skeletal integrity from our middle-aged to senior clients, especially in regard to building muscle mass.

Should we mention the potential bone-saving component of alcohol consumption? Might this extend past our scope of practice? These decisions may rest in the hands of a supervisor or fitness team director. Or perhaps sharing a study or two is an ethical compromise to allow your clients to reach their own conclusion. Regardless, as Dr. Katz submits, “If alcohol has any beneficial or detrimental effect, it’s probably going to be over a really long term.”