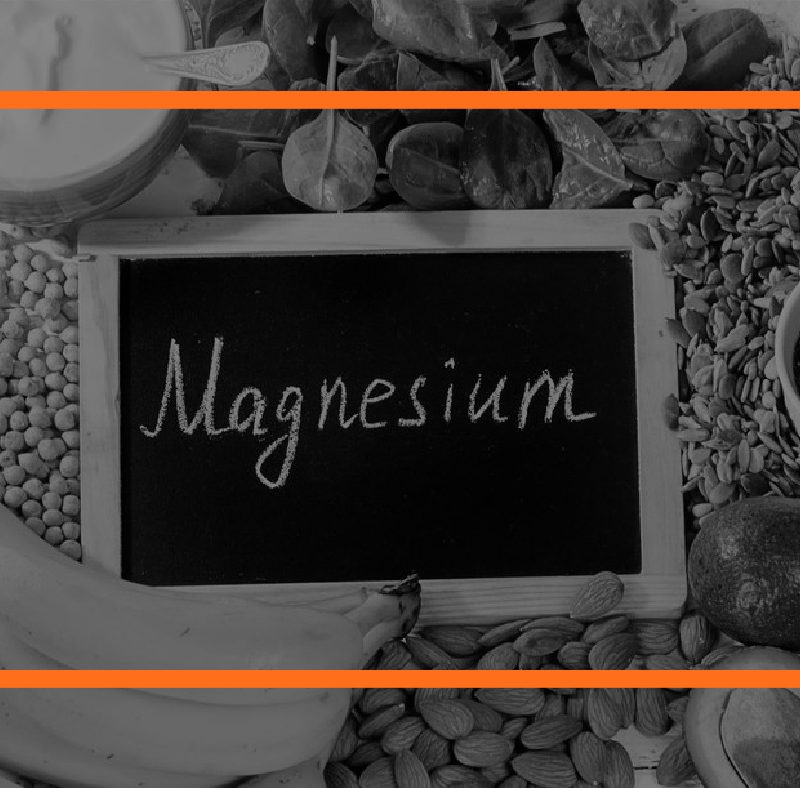 Magnesium, zinc, and chromium are mineral elements required in modest amounts to maintain health and optimize physiologic function. For very active persons, such as personal training clients and other athletes, adequate amounts of these micronutrients are needed in the diet to provide for increased expenditures and work performance. Recently, magnesium (Mg) has been touted as an agent for increasing athletic performance.

Physical exercise runs a risk of depleting the body’s level of Mg stores. Coupled with a lack of dietary Mg, a common occurrence for so many individuals, energy metabolism efficiency, and hence the capacity for physical work, suffers. A number of studies evaluated the association between Mg status/supplementation and exercise performance, demonstrating that the need for Mg increases with physical activity levels.

The Recommended Daily Allowance (RDA) for Mg lies between 400–420 mg for males and 310–320 mg for females over 19 years of age. Despite its critical role in energy metabolism, maintaining Mg intake at an adequate level frequently gets overlooked among the general population, and athletes in particular. For individuals who regularly participate in strength training, a suboptimal Mg status may lead to decreased endurance levels. In the case of prolonged bouts of aerobic exercise, higher intake of Mg correlates to a reduction in oxygen needs and better measures of cardiorespiratory function.

One swimming study showed that gerbils given 90 mg/kg body weight of magnesium sulfate 30 minutes prior to engaging in exercise experienced a rapid influx of glucose and delayed accumulation of lactate in the brain compared to the control group. Since the brain regulates all physiological function and metabolic activities taking place during exercise, such enhanced glucose utilization may benefit performance. Furthermore, gerbils/rats receiving the pre-workout Mg treatment demonstrated an ability to swim much longer than those in the control group.

During exercise, carbohydrates, fats, and protein are broken down sequentially, providing energy to support movement. The underlying mechanism of Mg-induced strength improvement could relate to its function in protein synthesis and energy metabolism. This in turn aids in the processes of muscle contraction and relaxation. Scientists predict that an adequate Mg supply may decrease the exercise-induced oxygen demands of muscle cells, thereby optimizing physical performance.

The delicate balance our bodies must strike in terms of a calcium-magnesium ratio has much to do with cardiac function, a fact made even more significant when we take into account that most Americans tend to overdo calcium intake. In addition, roughly 68% of all Americans fail to ingest sufficient amounts of dietary magnesium.

Calcium causes muscles to contract, while magnesium acts as a natural calcium blocker, helping muscle cells relax after contracting. In the absence of an adequate balance of magnesium, the system fails to function properly; if the ratio too heavily favors calcium, muscles (including the heart) tend to spasm.

Sleep irregularities and disturbances often lead to major health problems, not only in our country but around the globe. A research study among 46 older adults revealed that a supplemental dose of Mg not only decreased incidences of insomnia but also fostered better, more restful slumber. Perhaps this reflects the ability of magnesium to regulate the production of melatonin, as demonstrated in animal studies. Another theory points to the ability of magnesium to bind successfully to receptors on the hormone gamma-aminobutyric (GABA), which calms nerve activity, a common and troubling issue among individuals with poor sleep cycles.

Insulin receptors throughout the human body rely upon sufficient levels of magnesium for proper functioning. If magnesium levels dip too low, our cells can no longer utilize insulin effectively. Since magnesium helps to regulate the manner in which insulin removes sugar from the bloodstream and into the cells, such a dietary deficit can worsen the already deleterious effects of Type 2 diabetes.

If you or your clients wish to learn about the magnesium levels in everyday foods, take a look at and share the information in this chart. With a minimum of effort – and some forethought at the grocery store – you can make consuming ample amounts of magnesium easy and delicious!