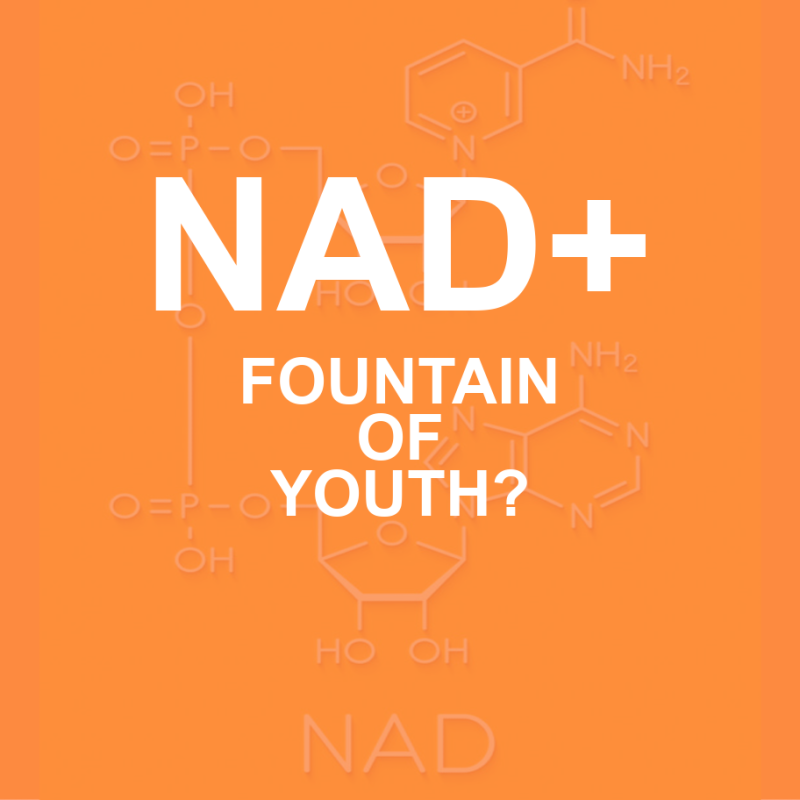 Clients seek out the expertise of personal trainers for a variety of reasons: to lose weight, increase strength, improve endurance, and often simply to feel “younger”. What if trainers could offer clients some valuable insights into adjunct ways in which they might reprogram the aging process? Nicotinamide adenine dinucleotide (NAD) has received ample attention in various disciplines, touting its cellular regeneration properties. Some have gone so far as to call it the “fountain of youth”. Find out what the hype is and if there’s any validity to this interesting substance.

Sirutins, NAD, and the Aging Process

NAD, a coenzyme present in nature, mediates many chemical reactions throughout the human body. NAD plays an important role in regulating sirtuins, or the silent information regulator 2 (SIR2) family of proteins. In humans and higher mammals, sirtuins affect physiological responses to both stress and metabolism, two key players found to accompany aging. Studies devoted to this relationship reveal how activation of SIRT1 can confer a fairly significant preventative and therapeutic measure against multiple age-associated disorders, among them type 2 diabetes and Alzheimer’s disease. SIRT1 activation also boasts the potential to extend health and perhaps lifespan. Sirtuin-activating compounds and NAD intermediates work together, and offer promise in achieving these previously elusive objectives.

Our bodies require NAD for many critical cellular processes besides the sirtuin reaction, leading research scientists to an understanding of why a limited amount of circulating NAD could cause dysfunction. NAD works as a cofactor in the glycolytic pathway of fuel conversion as well as DNA repair; the breakdown of proteins, fats, and carbohydrates to provide energy also count on the body’s maintaining a sufficient amount of NAD.

Research on the biology of NAD has experienced an uptick in scientific interest, opening the doors to the disease-causing process of age-associated functional decline. In particular, two specific NAD intermediates, nicotinamide riboside (NR) and nicotinamide mononucleotide (NMN), have provided the basis of much research over the past several years. Supplementing with these NAD intermediates, either nutritionally or via over-the-counter oral compounds, may confer preventive and/or therapeutic effects, offering ways to mitigate age-related diseases.

Could this ultimately lead to control of aging and longevity in mammals?

Supplementation: A Helper or a Hindrance?

Age poses a threat to the quantities of circulating NAD levels; however, attempts at increasing SIRT1 activity over the length of one’s lifespan proves challenging. A delicate balance exists between SIRT1 and sufficient NAD levels; unnaturally high and/or prolonged SIRT1 activity can actually lead to a depletion of NAD, the exact opposite of what we’d expect. Excesses of any oral supplements, especially those which lack FDA approval, carry a risk of throwing off our bodies’ finely tuned homeostasis. Further, the be sure to research supplement companies as well as the exact precursor to NAD as they have varying degrees of efficacy and differing actions in the body.

The term epigenome refers to the concept of how certain genes get either “switched on” or “turned off”, potentially affecting our DNA and causing illnesses. As an example, for many years now scientists have embraced the theory that every human possesses some “oncogenes”, the precursors of cancer. The manifestation of the actual cancer depends upon a certain oncogene getting “turned on”, either by environmental factors or other contributors.

The on/off switch selection gets magnified as we age. We may observe that inflammation seems more disruptive in our later years; perhaps the genes influencing inflammatory conditions have gotten flipped to “on” instead of remaining dormant within the body.

Age-dependent epigenetic abnormalities have led researchers to ponder ways to repair, or “reset”, such switches, thereby casting the potential to rejuvenate human cells. Consider the ability of stem cells to differentiate into a variety of cell lines. If an adult cell undergoes such epigenetic alterations, can scientists harness this power and reprogram entire human beings?

While we cannot argue with our genetics, perhaps science can in fact slow the process of aging and the typical age-related illness that plague our society and tax our health care system. Many professionals believe that science might offer ways of not only halting but, in fact, reversing the aging process. Researchers continue to uncover ways to activate the body’s defenses by removing senescent cells, those which age numerically but remain present, refusing to die. Over the long haul, old cells collect in tissues and release toxic substrates that could play a pivotal role in the origins of cancer and other diseases.

Individuals who wholeheartedly believe in the possibility of age reversal manipulation have found natural ways to foster healthier longevity. The following foods offer the greatest concentration of naturally-occurring NMN, which along with NAD show great promise in this nascent scientific field:

An Eye Towards the Future of Aging

I love the adage “You might have to grow older, but you don’t necessarily have to grow up!” To a certain extent, I have loosely attempted to build my life upon this platform, trying never to lose the sense of wonder, creativity, and imagination that come so effortlessly in childhood.  However, the emerging research data on NAD and NMN has me reformulating my notion of the aging process.

How To Slow Down Aging – A Guide