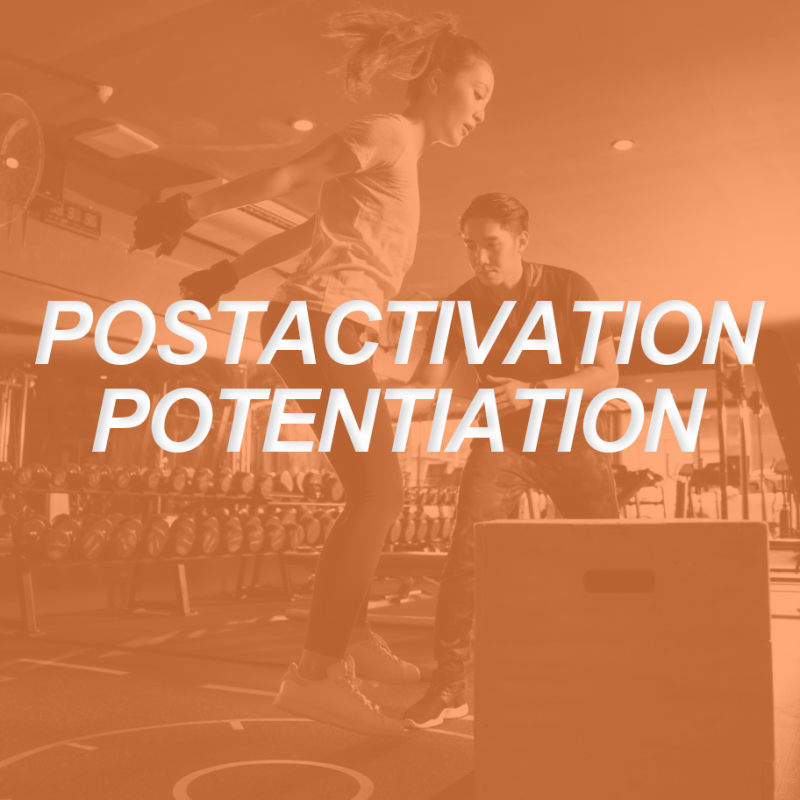 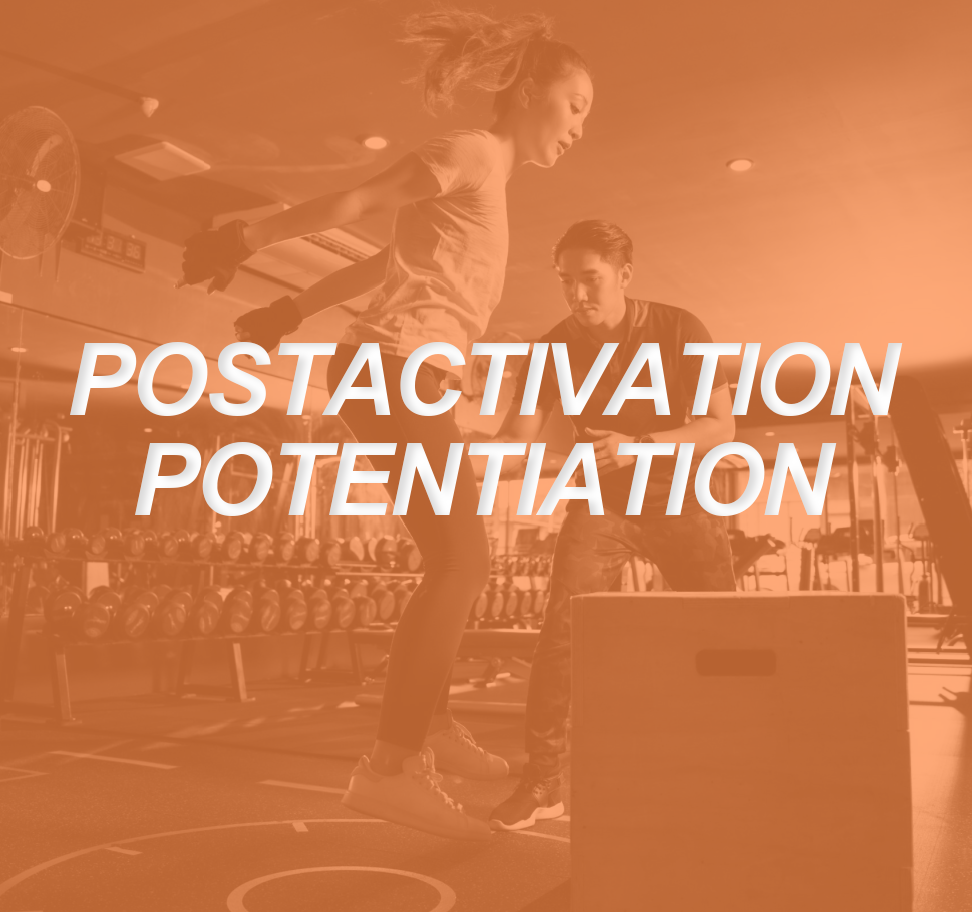 Any trainer working with clients long-term should be focused on developing increased power, strength, or speed through safe means. After guiding a client through a well-designed program for a moderate length of time, it would be reasonable to reassess that individual’s maximal capabilities – whether through one-repetition maximum tests (1RM) or alternative assessments. Postactivation Potentiation (or PAP) is a scientifically-backed method by which the body can harness additional power, strength, or speed (potential) by carefully leveraging the contractions of its own muscles.

The term “postactivation potentiation” appears to have been first used by Dr. Digby Graham Sale in the late 1990s or early 2000s. A professor of Kinesiology at McMaster University, Graham aptly described PAP in a paper from 2002 as, “the transient increase in muscle contractile performance after previous contractile activity”1. While the notion of increased muscle strength through activation seems counterintuitive at first, a deeper understanding of the physiological events taking place will provide alternative evidence.

The principal mechanism of postactivation potentiation relies on the phosphorylation of myosin, or the attachment of a phosphate group to myosin, which temporarily increases the ease of actin-myosin interactions within a specific muscle environment.

In simplistic terms, PAP can be understood as the activation of a muscle prompting the recruitment of additional nearby motor units for a temporary increase in muscle contractile strength. Obviously, though, muscle recruitment results in fatigue as well.

The key to the beneficial application of PAP exists in the time after the two initial consequences to muscle contraction (1. increased recruitment and 2. exhaustion) occur. Muscle fatigue recovers faster than muscle prime (potentiation) dissipates, leading to a condition in which muscles are primed beyond their initial state, and the level of exhaustion has returned to near its baseline value. This timeframe for improved contractile ability can be termed, the “window of opportunity”2.

The following diagram offers a streamlined visual depiction of the PAP process: 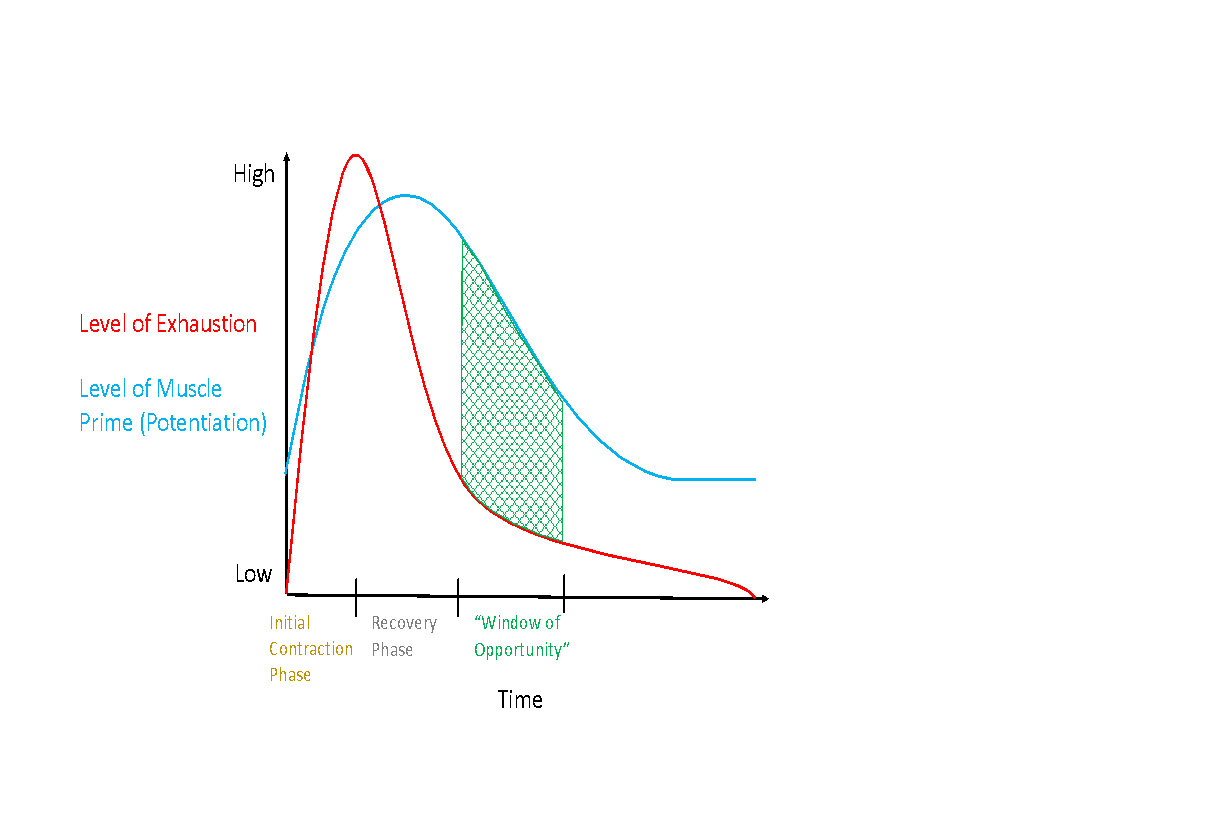 In a 2004 paper, Dr. Sale discussed how significant further research on PAP would be required given the sheer number of variables each situation involves3. While numerous research teams have addressed the topic over the past two decades, there remains some uncertainty surrounding aspects of the phenomenon. What has been effectively proven though, is that the phenomenon exists, and can be harnessed to provide additional strength, power, or speed in specific scenarios.

One study showed PAP increasing power output in multiple strength-related activities such as squats, bench press, lat pulldowns4 . This scenario “involves a combination of a heavy loaded exercise followed by a biomechanically similar explosive activity, best if specific for a particular sport discipline.” This result is significant, as it validates that PAP application can be used for increased strength across a variety of movement patterns. Another investigation exhibited PAP-producing improvements in speed and power output with a group of young athletes5. This application emphasizes the additional pathways of usage for PAP outside of a conventional weight room environment, as well as its functionality even in younger populations.

Research done by Andrew P. Hancock and colleagues had several swimmers employ PAP as part of a pre-race warm-up before completing 100-meter freestyle sprints 2. This set of trials yielded meaningful improvement in the mean times of the athletes. As a 100-meter freestyle sprint takes approximately one minute or more, this use case highlights the positive impact PAP could have in non-sprint or endurance activities.

Working In PAP with Fitness Clients

Having examined diverse utilization capabilities of postactivation potentiation, hopefully trainers can begin to mentally construct applications of use with their own clients. One meta-analysis of the scientific literature offers specific recommendations for using PAP.

Preparatory conditioning activity should involve repetitions in the 60-85% range of the 1RM load, with one set for inexperienced resistance training individuals and multiple sets for experienced individuals, and a rest period of seven to ten minutes before completing the tested or competitive activity. 6 Using these initial guidelines, trainers should conduct and evaluate experiments with their clients to individualize the PAP process as much as possible, helping clients harness their full strength, power, or speed abilities.

Let’s illustrate: An experienced resistance training client has a goal to increase their strength presenting with baselines of:

150 pounds in the deadlift

After an eight-week training cycle, you reevaluate the client. After an initial warmup, have the client engage in three conditioning sets of four reps of bench press at 75 pounds, with a brief rest (60 seconds) between rounds. After the 3rd set, the client rests for approximately seven minutes before attempting a 1RM bench press at 110 pounds. (10 lbs more than initial 1RM)

Similar steps could be followed for the deadlift, using 112 pounds in the initial three-set phase, and then testing the 1RM at 165 pounds. For the box jump, the conditioning phase could be done at 22.5-inches before attempting a 33-inch jump.

If testing speed rather than power or strength, analogous techniques can be utilized. Both runners and swimmers can benefit using PAP as a warmup before racing, for instnace.

After an initial loosening phase of their pre-race activity, dry land clients could complete three repetitions of twelve fast running steps against a bungee cord or monster band; those in aquatic environs could perform six high-effort stroke cycles using a swim parachute, on a one-minute time interval.

The bungee cord and parachute provide a level of resistance that functions similarly to the weightlifter completing sub-maximal repetitions of a particular exercise. After the initialization of the PAP, clients could aim for a recovery period around ten minutes before their races (allott additional rest time due to the potential for increased respiratory fatigue incurred through aerobic activities).

Using the general guidelines in combination with the examples above, trainers should experiment with their clients to individualize the postactivation potentiation process as much as possible: genetic makeup, training background, and many more attributes will vary between clients. Experimenting with PAP will enable trainers to help their clients harness their maximal strength, power, or speed capabilities.