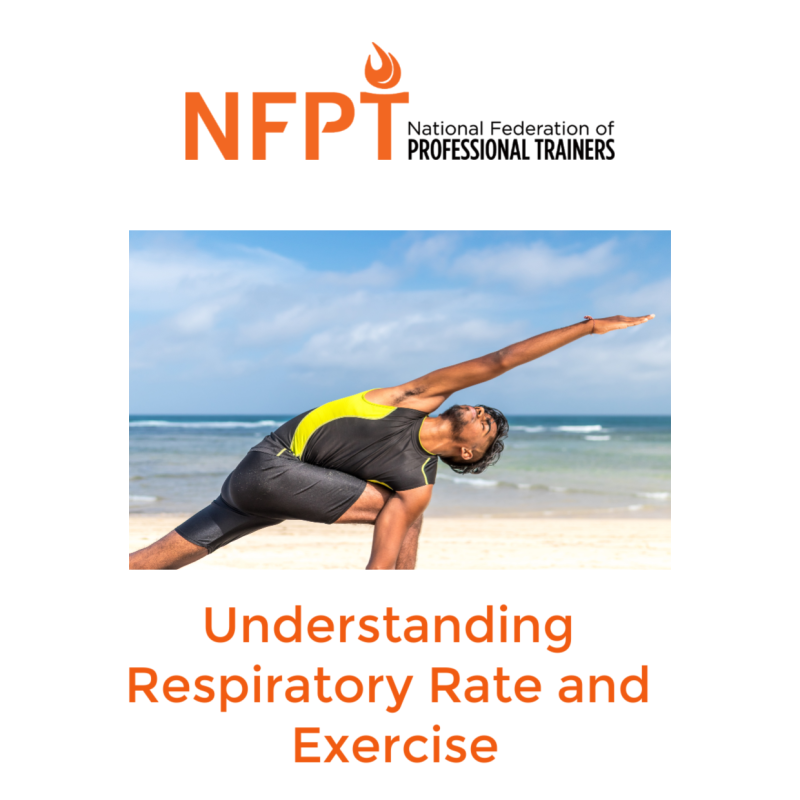 Although heart rate and sweat are seen as measurements of a great workout, another big factor in exercise success is the respiratory response. The more your client huffs and puffs, the harder they believe they’re working — and they’re not wrong. Science doesn’t offer a way for athletes and fitness enthusiasts to measure respiratory rate (yet), but we do know it plays an important role in cardiovascular workouts and interval training. Thanks to recent studies, we’re closer to understanding the connection between respiratory rate and exercise.

Why Does Breathing Rate Increase During Vigorous Exercise?

We’ll start with understanding why we get so winded while we’re exercising — especially during aerobic and cardiovascular exercises. Even though it can feel like our lungs are greedily thirsty for air it’s only to meet the oxygen demands of the rest of your body.

Your blood needs oxygen. Your muscles need oxygen. When you exercise and you put strain on your muscles, your body demands more oxygen, which is why you breathe so hard the harder you push your body. Your breathing is carrying oxygen to your muscles: First, it goes into your lungs, then it’s pushed to your heart, which pumps it into your bloodstream, which then feeds into your muscles.

It’s really no surprise that when your heart rate increases, your respiratory rate does, too–they are working in tandem. Your heart pumps all the oxygen-rich blood that it can to your muscles, but eventually, that oxygen becomes scarce. That’s why at the beginning of a workout, you’re not breathing as hard: There’s a store of oxygen in your body already, but supply runs low when your heart rate is high.

Effect of Exercise on Breathing Rate

Just as exercise raises your heart rate, it also raises your breathing rate. The direct relationship between exercise and respiratory rate is that you will begin to take in more oxygen — about three to four times as much, to be exact. That doesn’t necessarily mean that you’ll be taking more breaths. You can take in one long, slow, deep breath and get more Oxygen than you would if you were taking a series of shallow, quick breaths. Yet, the latter is what people tend to do when they exercise.

In many schools of exercise, the focus is on heart rate and form, which are both important for physical health, weight loss, and stress relief. However, the way you breathe during exercise is also important. When doing slow and controlled movements (like in yoga or weight lifting), you’ll want your breathing to mirror your movements — meaning that it should be slow and controlled too. If your body is moving quickly, then your breath will also be quick. It’s important to note that quick and shallow are not necessarily the same thing. You’ll want to direct your clients to breathe in deep enough to puff up the diaphragm, as shallow breathing can lead to dizziness, hyperventilation, and even fainting.

Benefits of Exercise on the Respiratory System

Exercise does the body good in a number of ways, but one of which is the benefit to the respiratory system. The more oxygen you take in — the more you exercise your lungs, and the stronger they get. The stronger your lungs get, the better they are at taking in oxygen and storing it in your bloodstream. As mentioned previously, you don’t need to breathe as hard at the beginning of your workout because there’s already a reserve of oxygen to be utilized. In the same way, your lungs will become more efficient over time so that the body will be able to store more oxygen in your blood so that you won’t be so out of breath when you exercise over time.

This is something you can tell your clients: The more they exercise, the less likely they’ll be to get winded during simple activities like going up the stairs or walking across a large parking lot.

It’s worth noting that certain types of activity have a greater impact on the body’s energy expenditure to repay the oxygen debt created from exercise: the more intense the exercise, such as in HIIT, the more oxygen is used, and the more effort the body must make to rebuild its oxygen store. This phenomenon known as excess post-exercise consumption or EPOC is highest right after concluding exercise and can burn up to 50 to 120 more calories.

Next week, we’ll tackle the proper breathing techniques for different activities. which can vary vastly! Your clients will be amazed at how a shift in their intention and attention to breathing can make exercise that much easier.

Is Your EPOC Epic? Understanding the Body’s Oxygen Debt

Daniel has been involved in the fitness industry for over ten years and has owned his own private training business since 2013. His passion for health and fitness led him to get certified through NASM, NFPT, and ACSM. He also holds a specialty certification as a Certified Inclusive Fitness Trainer (CIFT) and as a Certified Autism Trainer, which allows him to train individuals with physical and intellectual disabilities. In 2013, Daniel married his beautiful wife, Trinity. A few years later, they prayerfully started Special Strong to pursue their calling of working with the special needs population. They both attend Resonate Life Church in Lucas and serve in ministry together. In his spare time, he enjoys working out, reading, and fishing.