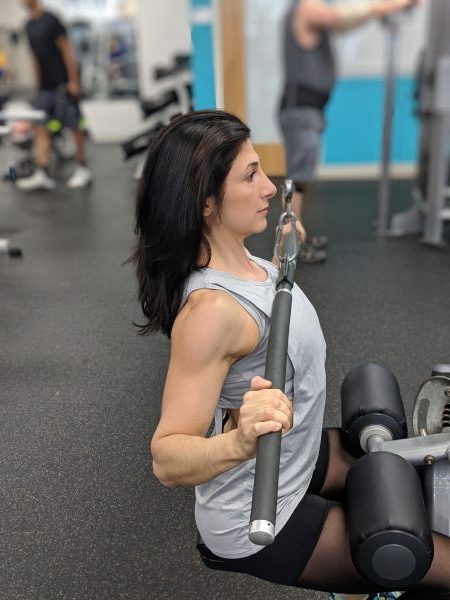 The scapulae need rhythm and symmetry to allow for adequate motion when performing pull-ups. Assessing scapular rotation before progressing to an independent pull-up sets your client up for better results and reduced risk of shoulder injury. 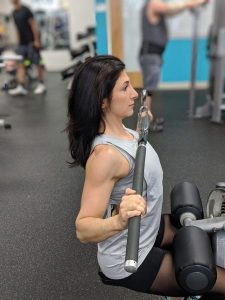 There are three joint actions/areas in which mobility will affect the ability to produce an efficient pull-up:

When the scapulae are positioned optimally at rest, the medial borders of the scapulae are vertical and parallel to each other. When the arm abducts, the scapula will glide and rotate over the rib cage so that the inferior angle of the scapula moves laterally (towards the side of the body) and superior (above) to its resting position. This is upward rotation (image on the left, below).

As the arm adducts and returns to rest beside the torso, the scapulae downwardly rotate to return to rest. For many folks, the scapulae remain downwardly over-rotated at rest. The medial borders are no longer parallel, but instead, the inferior angles (the bottom point of the scapula) will be closer together than the superior medial angles. 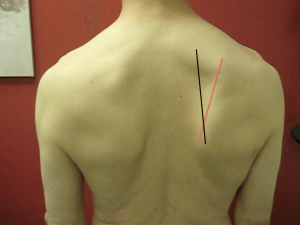 If the medial inferior borders of the scapulae are visually prominent at rest as in the photo above, this is an indication of anterior tipping or “winging”. You can have the client raise his arms straight out in front of him to look for winging in this position as well.

Observing the scapulae in motion is the next step. This is best approached on the lat pull-down machine. The weight must be set heavy enough to complete no more than 8 to 10 reps. The bar should ideally be brought down past the chin towards the clavicle. At the bottom of the movement, the scapulae should appear flat against the back, medial borders parallel. The orientation of the humeral head should be pointing upwards, not forwards.

If the shoulders appear hunched, the humeral head is likely anterior and superior to its proper place in the glenoid fossa, an indication of anterior tipping. The medial borders of the scapulae may also be visually prominent at the bottom of the movement, a clear “positive” for anterior tipping.

Scapular winging is an indication that the muscles responsible for anterior tipping are short and overactive:

The muscles responsible for posterior tipping and scapular depression are long and weak:

It may be helpful to start with a static posture assessment to see if the scapulae are resting in an ideal position. Simply look at the angle of the medial border or palpate (with permission) if it cannot be easily seen. If they are not parallel, then it is already clear the scapulae are downwardly rotated (resting upward rotation is not common, but does happen).

Before a movement assessment, you already know that the downward rotators are short and overactive:

And the upward rotators are long and weak:

Clearly there is overlap with which muscles contribute to downward rotation and anterior tipping.

This is far from an inclusive list of all joint actions, dysfunctions and possibilities, but for the purpose of simplicity and to focus on establishing optimal pull-up mobility and strength, I’ve opted to highlight these areas. A corrective exercise approach focused on addressing these imbalances is the next step towards establishing a balanced pull-up progression program. 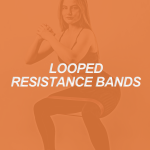