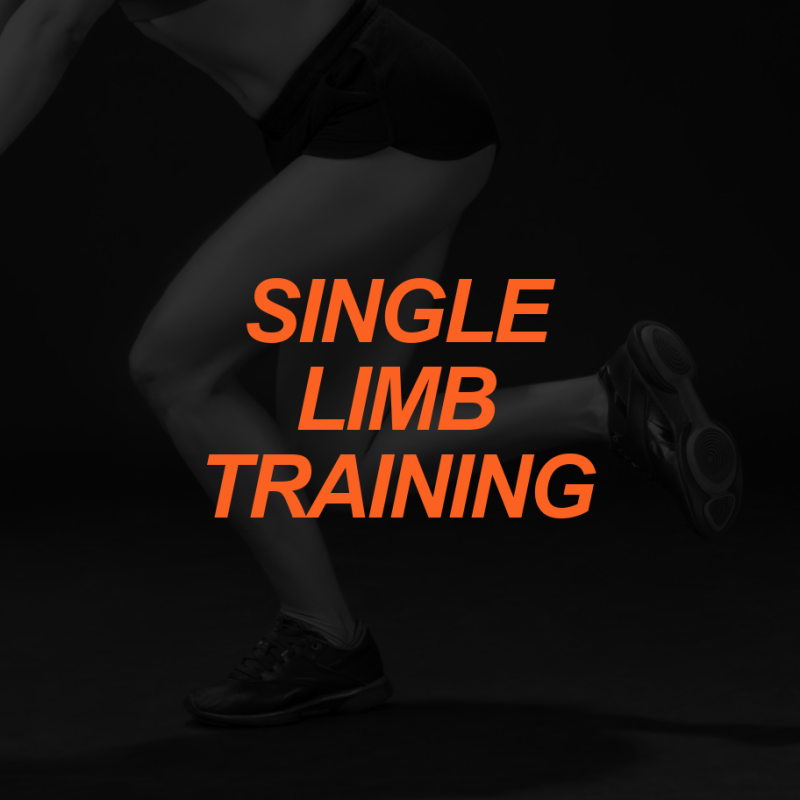 Single limb training is not a new concept, yet it is far more common for people to train bilaterally— think squats, bench press, lat pulldowns, deadlifts, etc. Before we jump into the benefits of single limb training, let’s first define what it is and how it differs from bilateral training.

Single limb training or unilateral training is the use of one arm or one leg only during an exercise; bilateral means both arms or both legs are used at the same time. Over the last decade, the popularity of unilateral training has grown immensely most likely due to the rise of functional training and greater emphasis on mobility. Regardless of where you side on the fence of training methodology, the value in single limb training is undeniable regardless if you are an athlete or a general fitness client.

This is not a campaign to drop bilateral training–far from it! However, the benefits of single limb training are extensive. Here’s how it can help yield better results and performance by simply adding to your clients’ workout programs.

It might seem intuitive to train for strength in bilateral movements to also be stronger in unilateral movements, but this isn’t true. Back in 2007 there was a study conducted by Dr. Stuart McGill that showed otherwise. The study focused on the bench press and the single-arm cable press which didn’t show a correlation in strength between the two.

Works more of the targeted muscles

When you do a bilateral back squat, the first limiting factor is your lower back. Some experts in the field of Strength and Conditioning including Mike Boyle would go as far as to say back squats are a lower back exercise versus a leg exercise. If you are looking to really focus on the leg muscles without the weakest Link of the lower back (and also grip limitations of weight held) then substitute the single leg squat. When you do single limb exercises like the single leg squat you get the adductors involved, along with the gluteus medius, quadratus lumborum and a number of smaller muscles that must engage to keep your body from rotating and twisting sideways—as well as to keep you performing the exercise. All of the additional muscles that come into play are called the lateral subsystem.

The Sums are greater than the whole

When you do single limb exercises the core is challenged in a greater way. Both single arm and single-leg exercises have unique core benefits. When you do single-arm exercises you force the ribs to your hips (think tighten or shrink) which keeps you strong and stable at the bottom or top of the lift eliminating turning or twisting at the spine.

When you do single-leg exercises, you improve control over your hips and lower back which helps with keeping a neutral spine to avoid injuries. Lets take the single leg squat again as an example: the un-supported leg forces the muscles in your core to turn on in order to maintain balance and stability.

One of the most common faults in bilateral training especially with heavy back squats is knee valves (knee collapses inwards) which is connected to ACL injuries. When you train on a single leg, the stability required is different due to the position and knee injuries and back injuries are almost nonexistent.

When you work both limbs evenly you work both your dominant limb and non dominant limb evenly, correcting for strength disparities. If you exclusively train bilaterally then you may never know which limb takes over on an exercise. Single limb training allows you to get stronger independently and reduces muscular strength imbalances. The larger the gap of strength between each limb the greater the injury risk. You can’t create more balanced strength if you are only training bilaterally.

If you are a taller athlete like myself, I can tell you firsthand that single-leg training works best for me without the same stress on my joints.

Running is considered a series of horizontal bounds and is, in essence, a collection of single-leg actions. Most sports with the exception of rowing, are not done with two feet on the ground. In fact, not just sports but virtually any movement. Knee injuries, especially ACL tears, are reduced by simply implementing more single leg training.

If you have ever been injured, sprained ankle, broken wrist, etc. should you stop training? No, you train the limbs that are not affected. I recall when Bo Jackson– the legendary and some say mythical athlete who played both professional football and baseball–broke his hip during a football game in the early 1990’s. Most said he was done, never to play pro sports again. Well, he had hip surgery and trained exclusively on his good side (the opposite hip and leg). By training the unaffected leg he made his injured side stronger. This phenomenon is called cross-education and is believed to be explained the neurological effect that your body goes under. By training one limb the opposite limb gets benefits of strength.

What’s there to lose?

If you can build more muscle, reduce injuries, and correct imbalances, wouldn’t you at least try it? Single limb training is here to stay and it will surely benefit you and your clients to program into your workouts.