Diastasis Recti is a rapidly booming pre and postnatal topic and fitness professionals must be able to intelligently address client’s needs. Diastasis represents a foundational core dysfunction that must be addressed if your client desires optimal function.

Diastasis Recti is commonly defined as abdominal separation.  It occurs in pregnant and postpartum women, but also in newborn babies and even large-bellied men.  This kind of core dysfunction is so widely pervasive in our society that even when a client doesn’t yet show a diastasis separation, she is likely at risk.  Core dysfunctions that result in diastasis are likely to be associated with or correlate to a number of other debilitations that are commonly exacerbated around the perinatal period.  These debilitations are so common-place that our society now thinks of them as “normal.”

Here are the words of one woman who posted to a group forum on Diastasis:

“The pain that comes with this condition is ruining my life. I can’t remember the last time I lived a day without having to swallow pain medication. I can’t exercise anymore. I can’t have sex anymore. I can’t play with my kids. This is ridiculous. Nothing I try works to improve this. What am I supposed to do?”

Diastasis can be considered the symptom of chronic core weakness.  Just like core weakness can cause back pains, disc herniations or lead to knee, ankle, or neck pains, it can also lead to diastasis.  This happens when the core’s inner unit is not effectively transferring forces; when it is not regulating intra-abdominal pressure effectively.  If an excess of pressure is consistently forced into the tendinous linea alba sheath rather than balancing synergistically throughout the abdominal muscles, the forces may be great enough over time to cause a severe stretching.  In theory, this can happen to anyone, but especially a pregnant mother who has a fast-growing uterus that requires her core to adapt relatively quickly, potentially stretching the connective tissue. 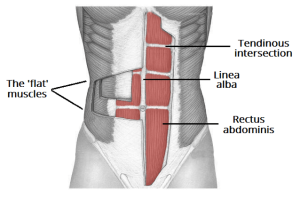 There are two types of pregnant moms who are likely to incur a diastasis stretch of the linea alba.  Most common is the woman who is “core amnesiac.”  This means that the woman has very little core awareness before pregnancy (like most of our clients when newly starting with us).  The under-activation of the core often means that the diaphragm, pelvic floor and transverse abdominis do not function with the appropriate tension at the appropriate times, leaving the belly to be overly relaxed.  Once pregnant, that lack of core awareness simply perpetuates, and the relaxed belly muscles relax farther than they might otherwise.  The vast majority of prenatal clients will fall into this category.

The other common type of diastasis-risk prenatal client is the opposite: instead of a relaxed core, she has a tight or over-active core.  This is more likely to be a fitness enthusiast, and sometimes those who have taken their love of abdominal exercises to a level that may no longer be serving them (Pilates, for example). In this case, your client may have learned to constantly tighten her stomach, and will often be proud of her tight abs. Tight abs are great on the occasions that they should be tight, but not necessarily all the time. The diastasis occurs when this tight TVA is trying to hold back a uterus for nine months.  The uterus will win.  As the uterus grows outward, it can force a stretching of the linea alba sheath, and now this “super-fit” woman is surprised to find out that she has diastasis.

Pregnancy can often exacerbate previous symptoms or reveal musculo-skeletal challenges that are likely to occur years later.  This is where misalignments such as pelvic girdle pain, sacroiliac joint dysfunctions, symphysis pubis dysfunctions, sciatica, disc herniations, piriformis syndrome, and many other challenges can arise.  They are all generally symptoms of the “stress” of pregnancy being placed atop an already faulty musculo-skeletal alignment.

As a solution that will last a lifetime, have no side effects, and require no surgery, Fit For Birth teaches the Core Breathing Belly Pump (CBBP)™. It is defined as, “the rhythmic inhaling and exhaling that maintains activations of the diaphragm, transverse abdominis (TVA) and pelvic floor (PF) muscles to dynamically maintain intra-abdominal pressure so that the core may assist in stabilizing, accelerating, and decelerating any exercise.”

Effective prenatal coaching emphasizes a balance between core amnesia and the excessive all-day holding of a super-tight TVA.  More specifically, it can be thought of as coaching the natural rhythmic breathing cycle of concentric TVA contraction (on the exhale) followed by an eccentric TVA contraction (on the inhale). The natural rythmic cycle should be  predominantly powered by the diaphragm all day long, with more activation and tension during the times that are necessary (like during exercise).  Naturally, the core tension would be less aggressive during easier activities of daily life, but still needs to be coached into greater activation in most clients!

In many ways, CBBP™ is similar to other diastasis prevention and treatment techniques, like the Tupler Technique®, but is also being regarded as a simple foundational principle because it’s based upon something your clients do 20-25,000 times every day: breathing.

The most important aspect of the CBBP™ is that your client can perform a proper diaphragmatic breath, which is unfortunately difficult for the vast majority of pregnant (or non-pregnant) clients. In brief, the first two-thirds of a “deep inhale” should notably enter the ribs, belly and back first.  It is then considered biomechanically correct for the chest and shoulders to rise in the final third of the inhale of a “deep breath,” but not before.  After asking just a handful of clients to “take a deep breath,” you will start to see patterns and build your familiarity and expertise in coaching.

If the diaphragmatic breath is not optimal, core activation techniques like the CBBP will not likely be enough to prevent core dysfunction symptoms like diastasis recti.  In the human body, the diaphragm muscle is top of the totem pole. And in most of your clients (often nine out of ten) it will literally need to be trained, like lifting weights.

Helping your clients create a balance of diaphragmatic breathing and core-TVA activation before, during and after pregnancy will help them have optimal core strength while decreasing their chance of having abdominal separation.