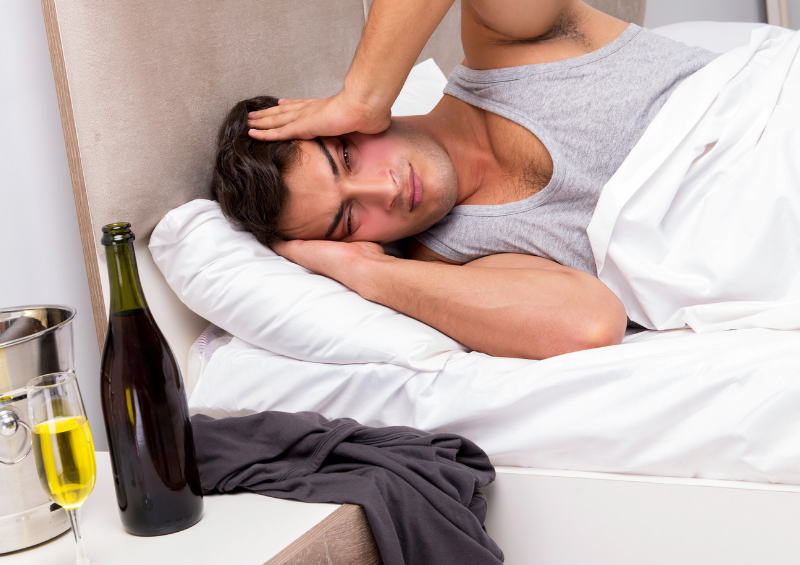 Is it ethical to recommend alcohol to our clients?

An important aspect of professional personal training includes reminding clients of how important clean eating and appropriate hydration are in achieving a healthy body. We often field questions regarding the value of water versus electrolyte replacements, the proper quantity of fluid to consume prior to a half-marathon…the list goes on. However, rarely would we find a reason to validate alcohol consumption in relation to exercise.

It has been well documented that alcohol acts as a depressant to the central nervous system, slowing the communication between brain cells. At some doses, alcohol in the bloodstream impacts the cerebellum, which plays a crucial role in muscle activity. This, in turn, can lead to a loss of balance. In addition, alcohol acts as a diuretic by expediting the rate at which fluid is lost from the body, accompanied by vital electrolytes. The ensuing increase in lactic acid production worsens fatigue while exercising.

This certainly does not sound like a recipe for successful hypertrophy! Research goes a step further, demonstrating how alcohol consumption impairs the process of protein synthesis, which as we know is crucial for the development and maintenance of lean muscle mass. Binge drinking may actually cause testosterone levels to plummet while increasing cortisol, a hormone that destroys muscle.

The fitness industry’s stance on alcohol is due in large part to its lack of nutritional value. Ethanol, the type of alcohol found in beer, wine, and cocktails, creates toxic metabolic byproducts called acetaldehyde and acetate. These are the foes that cause nausea, guaranteed to interfere with a strenuous resistance training session. Chronic ingestion of alcohol can also have deleterious effects on digestion, making it challenging for the body to absorb nutrients like amino acids and B vitamins, key players in muscle synthesis.

With such an abundance of information contraindicating the serious athlete’s recreational drinking habits, it comes as somewhat of a surprise to learn that a moderate amount of alcohol can actually have beneficial effects on exercise. Similarly to the role that timing of nutrient intake plays in maximizing results, it is not only the quantity of alcohol consumed that will affect exercise but also when one toasts “Cheers!” in relation to that hour in the gym.

Although moderate alcohol consumption magnifies muscle weakness when one imbibes immediately after exercise, low doses do not have the same effect. The same research team who presented this data found that healthy males who consumed 0.5 milliliters of alcohol per kilogram of weight immediately after a workout had no change in muscle strength when compared to a control group. Moderated drinking after a workout appears to not have any negative effects on muscle recovery.

The Concept of Moderation

In an article that appeared in Time magazine by one of my favorite health writers, Dr. Sanjay Gupta, readers are provided with an explanation for why a drink or two might not be the undoing of a tough workout. Moderate alcohol consumption appears to confer the same positive effects as exercise on cardiovascular health.

By increasing the bloodstream’s levels of healthy cholesterol, it may be possible to reduce the risks of vascular disease. This is not to be interpreted as alcohol becoming a suitable substitute for exercise. Rather, the research was conducted in conjunction with a healthy lifestyle.

Gupta continues his explanation by stating that these positive benefits are likely conferred only upon individuals aged 45 and older. Perhaps this is one reason many doctors suggest a glass of red wine each night to folks in that age demographic.

Data collected after a study performed on over 36,000 British and Scottish individuals revealed interesting results. Among these male adult participants, 85 percent were categorized as the “occasional” drinker. Thirteen percent were considered “heavy drinkers”, consuming 14 or more units of alcohol per week.

The scientists published their findings in The Daily Mail: “Our results provide an additional argument for the role of physical activity as a means to promote the health of the population even in the presence of other less healthy behaviors.” Professor Matt Field, from the U.K. Centre for Tobacco and Alcohol Studies at the University of Liverpool added: “This is a rigorous piece of research with some clear conclusions.

The relationship between drinking alcohol to excess and increased risk of death is significantly weaker in people who are physically active. Therefore, it appears that physical activity may partially offset some of the harmful effects of drinking, particularly alcohol-attributable cancers.”

Previous research has also found that long-time drinkers who exercise regularly have less damaged white matter in their brains, the area involved in “wiring” of the brain’s communication system. This begs the following question: is it the exercise that confers this result, the alcohol consumption in conjunction with exercise, or the drinks themselves? Clearly, further study is warranted on this topic.

How Can We Help?

As educated fitness professionals, it is important to understand the “which came first…chicken or egg?” aspect of pairing alcohol consumption with exercise output. Similarly to the article I wrote and recently published on how sleep and exercise affect each other, erring on the side of proportional moderation is the key take-home concept here.

For my clientele, I most likely will not broach the subject unless I am directly asked. Being armed with scientific data on this topic affords you the opportunity to provide a safe and statistically proven idea for your clients, giving fair deference to each side of the argument. You can then feel confident that your client, on his own time, will make a prudent and informed decision before heading out to the bars.

Are your clients looking to avoid alcoholic beverages this holiday season? Here’s an idea for a mocktail.