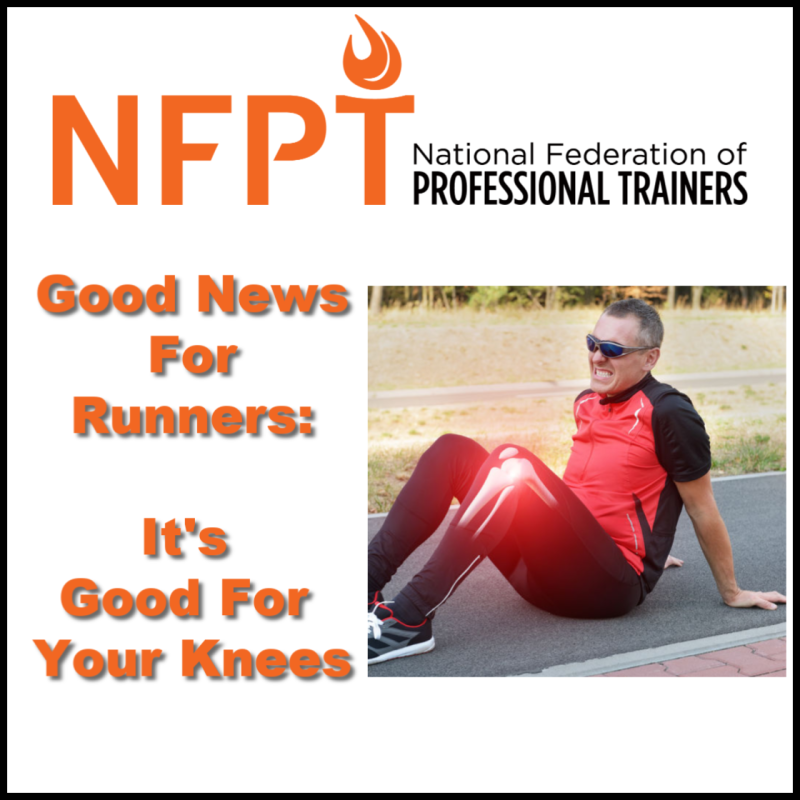 The sport of running has always carried with it the stereotype that it might damage one’s knees. New research aims to change that perception, suggesting recreational running as a panacea for middle-aged knee osteoarthritis.

You might find you have clients in their 40’s-60’s often expressing a desire to increase their cardiovascular efforts. Many such individuals tell us that they would like to try running, or have entertained the idea of participating in a local 5K. However, unsolicited concern from well-meaning friends harping on the ruination of their knee joints may deflate their enthusiasm. Propagating this notion not only discourages able-bodied clients from trying the sport it also invokes fear in those falling within this age demographic who do engage in and enjoy recreational running.

Interestingly, recent research on the kinesiology of runners’ knees debunks the idea that joint problems always arise, leading experts to conclude that running typically does not inflict damage to healthy, or even slightly “worn”, knees. In one such study, a group of 82 middle-aged, healthy adult subjects participating in their first marathon underwent MRIs of both knees six months prior to the race as well as 15 days post-marathon. Participants also completed Knee Injury and Osteoarthritis Outcome Score questionnaires to report perception of their knee function.

The pre-marathon and pre-training MRIs indicated damage, albeit asymptomatic, to several knee structures in the majority of the 82 middle-aged volunteers. After completing the 26.2-mile race, MRIs showed a reduction of damage in subchondral bone marrow edema in the condyles of both the tibia and femur. The cartilage of the lateral patella, semimembranosus tendon, iliotibial band, and the prepatellar bursa likewise showed marked improvements.

The research team concluded that embarking upon a program of distance running can potentially rebuild the health of certain components of middle-aged knees, even if the joints exhibited previous signs of wear and tear. However, a very important caveat exists: if middle-aged runners neglect to prepare properly – including appropriate training, rest days, stretching and adequate nutrition/hydration – the excessive mileage that accompanies distance running/training might erode particularly vulnerable areas within the knee.

Studies conducted on elderly runners showed a reduction in the rate of developing knee arthritis when compared to individuals leading sedentary lifestyles. Additional research showed that even the knees of younger athletes revealed less post-run inflammation than after extended bouts of sitting.

One study sought to determine if running incited measurable differences in the progression of osteoarthritis (OA). Volunteer subjects fell into 2 groups: middle- to older-aged runners and healthy non-runners. The research spanned almost two decades (1984-2002) and employed serial radiography as a determinant of joint/cartilage damage.

Long-distance runners were recruited with a control group, with a mean age of 58 (range 50–72) years. Radiographic knee scores and the frequency of severe OA were assessed between runners and controls.

By the end of the research protocol, runners did not demonstrate signs of more prevalent OA (20% vs 32%) nor more cases of severe OA (2.2% vs 9.4%) than did controls. Interestingly, data revealed higher initial BMI to be associated with worse radiographic OA at the study’s conclusion. This posed the speculation that since carrying less weight is known to reduce the risk for knee arthritis, might an average runner display less OA simply due to his typically lower body mass?

Researchers at Brigham Young University in Provo, Utah, recruited 15 male and female runners under the age of 30. All of the participants reported no history of knee injury or arthritis. The scientists attempted to gather data on individuals with healthy knees in order to gain insight into running’s effects on otherwise normal joints.

Healthy knees typically contain a different amount of synovial fluid than knees afflicted with osteoarthritis. The researchers looked for a variety of substances contained in the subjects’ blood and synovial fluid, honing in on molecules typically associated with inflammation since this condition when in the knee contributes to the development of OA.

Unfortunately, not all outcomes could not be measured, since safely extracting synovial fluid from healthy knees proved to be a difficult and highly technical process. The data that was collected showed some interesting and consistent results: In almost every case, the runners’ knees showed substantially lower amounts of two types of cells that can contribute to inflammation within the synovial fluid, compared to baseline levels.

It seems that following a run, subjects measured higher blood levels of the inflammatory substances in question and lower levels in their synovial fluid. In effect, running seemed to have “squeezed” the molecules out of the knee capsule and into the bloodstream. For a more sedentary population, sitting seems to increase concentrations of inflammatory-regulating molecules.

Robert Hyldahl, a Professor of Exercise Science at BYU and lead author of this study, published his results in the European Journal of Applied Physiology. He hopes to repeat the study using a much larger sample “…0nce we figure out how to get more synovial fluid safely from healthy knees.” He believes that moderate running is “not likely to harm healthy knees and probably offers protection” against joint damage.

Running appears to decrease knee pro-inflammatory cytokine concentration, and as previously mentioned, individuals who run regularly do not demonstrate an increased prevalence of knee OA. Peak knee joint contact forces (ie, loads) pack a much greater punch during a run than during a leisurely or even moderately-paced walk, yet recreational walkers report a higher incidence of knee OA. This paradox led experts to surmise that perhaps running mitigates the effect of high peak joint contact forces by providing a fairly low load per unit distance (PUD).

A research study was conducted in an effort to compare peak and low PUD knee joint loads while walking and running. Fourteen subjects were placed into two groups (walkers and runners) each moving at their own desired speed. Data points were assessed based upon ground reaction force and motion capture, designed to estimate peak joint loads, PUD loads, and a new parameter, the impulse of contraction force.

While the peak load recorded during a run tripled the amount seen for walkers, and the impulse of joint contraction force was 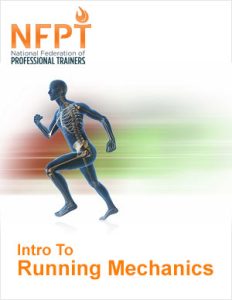 higher for runners versus walkers, the PUD load decreased as speed increased. Apparently, the cumulative load carries more significance for developing OA than peak load. The combination of short duration ground contact and long stride length in running curbs the effect of high loads. In the final analysis, PUD loads are no higher during a run than a recreational walk.

Good News for Trainers and Clients

Armed with this knowledge, trainers can help clients dispel the myth that running automatically leads to knee problems for an aging population. In fact, engaging in marathon (or even shorter distances) training may help “condition” knee cartilage to withstand the mechanical stresses induced by regular running. By making use of appropriate training methods, we can feel safe in helping our clients attain goals they may have set for themselves in terms of participating in an upcoming 5K. 10K, or even a half-marathon.