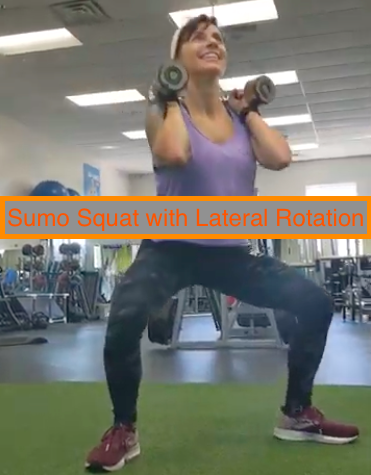 When it comes to lower body development, the squat reigns supreme for hitting all the large muscles at once, and adding squat variations to your program will not only keep things interesting but will help to hit those big muscles from different angles and with varying intensities.

This variation of a squat is not one that comes up readily if you google it. In fact, I only found one video for it that called it something slightly different. I was first introduced to the movement through my barefoot training certification workshop held by Dr. Emily Splichal. She commented that this exercise was shown on a myograph to have strong recruitment of all the gluteal muscles. 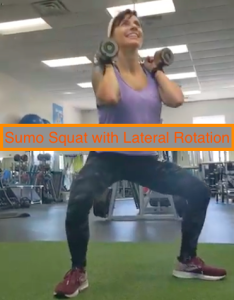 What Does a Sumo Squat with Hip Rotation Engage ?

A squat with a lateral hip rotation challenges all the gluteal muscles simultaneously plus the quads and adductors, the latter to a much greater degree than a standard squat stance.

Landing in the sumo squat position with knees aligned over toes fires up the posterior fibers of gluteus medius slightly more than the standard width squat because of the wider, turned-out stance.

The adductors are in a stretched position, placing more tension on them at the bottom squat position. Pushing off the ground and returning to the start position engages the gluteus maximus and the quads, and hamstrings to a lesser degree.

The stabilizing leg is working just as hard on the return to start. The internal rotators– TFL and glute minimus–along with the adductors are bringing the legs back together. The deep rotators are stabilizing the joint, too. But because the start position is a semi-squat, the glute maximus remains under tension throughout the exercise with little reprieve.

This makes it an excellent endurance or higher rep/lighter weight hypertrophy endeavor.

What other ways can you think of to vary this sumo squat variation?