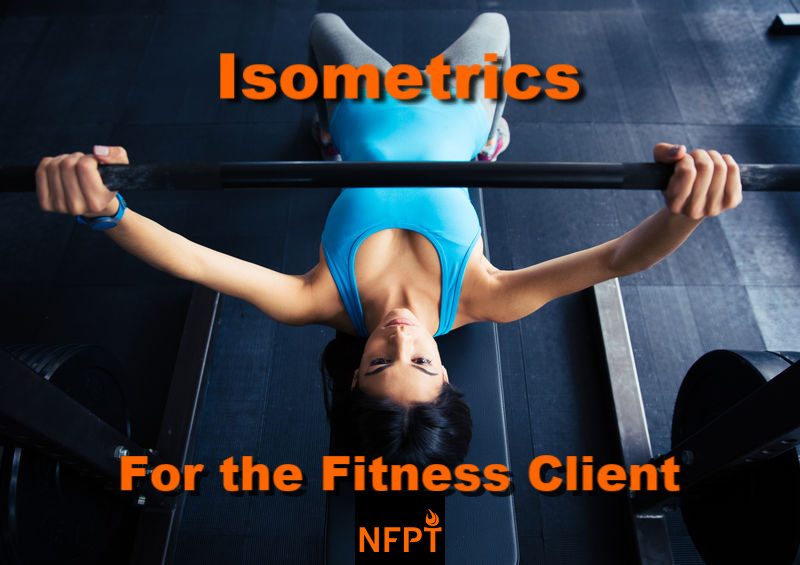 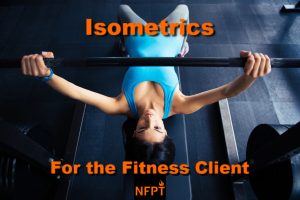 Personal training is not always about how much weight a client can lift. Sometimes lifting no weight at all can challenge a client in new and different ways. This is the beauty of isometrics.

Isometrics refer to exercises wherein the muscles are producing force in the absence of movement. Think about pushing or pulling against immovable resistance, like a wall, or simply holding the weight of a barbell in bench press position for a designated period of time. You will certainly feel tension in the chest, shoulders and arms, but it is in the absence of any movement around a joint.

In positions like these, the muscle fibers are activated; but since there are equal forces against each other, there is no movement.

Whether pushing or pulling, the intent may differ but the result remains the same. We refer to overcoming isometrics as the act of attempting to shift the position of an immovable object. Yielding isometrics, on the other hand, refers to holding a weight in place (against the pull of gravity) and preventing it from falling to the ground. Finally,  functional isometrics employs a static hold at a chosen stop during a lift.

Overcoming isometrics transfer a greater amount of energy to concentric strength and thereby demand more from the neurological pathways. Such moves lend themselves to short, intense efforts. This approach does not result in muscle damage and therefore, cultivates much more muscular strength versus size.

Yielding isometrics will spare the neurological system in favor of transferring eccentric strength to the muscle. As such, these moves can be executed for longer durations and can increase muscle size over time.

Functional isometrics involve using a very short range of motion or partial lift (about 2 inches of movement), immediately followed by a static hold in the end position for 6-9 seconds. By selecting the strongest position of the movement, 20-50% more weight than one’s 1RM for that complete movement can be handled. This enables the neuromuscular system to adapt to handling heavier weights, effectively desensitizing the protective mechanisms that prevent one from reaching his full strength potential.

On a scientific level, research has determined that if a muscle does not sustain a hard contraction, i.e. putting maximal effort into the contraction, then the body will only recruit a minimum number of fast-twitch fibers, (the ones most involved in muscular growth). Muscle fibers that are not recruited cannot be fully fatigued, and a fiber that is not fatigued receives little to no stimulus to grow.

Muscular growth is influenced by maximal muscle tension when maintained longer than a typical dynamic exercise. Research conducted by Kanchisa et all, in 2002, revealed an average muscular growth of 12.4% when a maximal isometric contraction  (100% Maximal Voluntary Contraction) was sustained for six seconds in each of 12 sets per training session, significantly higher than a group sustaining longer contractions with less weight, but equal volume.

This experiment was conducted over 10 weeks, and the above isometric group was measured against a second group of subjects who trained at only 60% of MVC for 30 seconds sets and executed four sets per training session. It would appear, then, that a purposeful effort to accelerate a load might be equal in effectiveness to the actual acceleration, in terms of stimulating muscular adaptations.

In a blog article I wrote earlier this year, Symbiosis of Maximizing Size and Strength the concept of how hypertrophy is best achieved is underscored: by performing sets that last 30 to 60 seconds. A training set longer than only a few seconds forces the body to switch to the glycolytic-energy system, leading to the formation of lactic acid. Lactic acid is vital to the production of new muscle tissue, as it induces a surge of testosterone, a key component of hypertrophy. The increased time under tension is imperative for growth.

With proper training, up to 10% more muscle fibers can be recruited during a maximal isometric action than during the typical concentric or eccentric movement. Since fiber recruitment is primarily responsible for affecting neural strength, frequent isometric training can literally train the nervous system to be more efficient at recruiting more muscle fibers.

The firing rate of the fibers soars during a maximal isometric action, more so than during a maximal eccentric action. So just like the body adapts to recruit more muscle fibers it can also get better at firing faster with isometric training. Not only do muscle fibers get stimulated with isometric exercises; bone mass, too, receives a boost. All of this explains the phenomenon often observed by athletes (myself included) wherein a small body can push a significant amount of weight!

Isometric exercises are commonly utilized in the early stages of rehabilitation exercises. Their key advantage lies in orthopedic applications–those in which patients attempt to isolate and strengthen particular muscles by virtue of their ability to localize an exercise without involving any joint movement. Isometric exercises have likewise been utilized to counteract muscular atrophy.

Isometric program frequency is determined by a client’s fitness goals. If he or she seeks to rehabilitate from an injury or illness, 5-7 days per week is not considered excessive. If the aim is to build both strength and muscular endurance, a mere three days per week can have a dramatic effect. Athletes, in general, tend to lack isometric and eccentric strength in comparison to their concentric (lifting) capabilities. A prudent trainer or coach seeks to incorporate isometric moves into any workout, regardless of the client’s weightlifting ability.

While most weightlifting exercises work large muscle groups, isometrics facilitate the isolation of small muscles. Some activities require the strengthening of small muscles, such as those in the palms and fingers.

As an example, a client who frequently performs in piano recitals would benefit from small muscle isometric exercises. Also, clients who may have lost the ability to effectively grip silverware or writing utensils, due to either arthritis or a stroke, can be taught to strengthen these weakened areas with appropriate isometric movements.

It is important to rotate your client’s isometric exercise routine so as not to overwork particular muscle groups. While isometric exercises are generally gentler than most strength training workouts, overtraining specific muscles and their secondary or supportive structures can certainly occur.

An example of a safe isometric training program to avoid over-training and injury would involve working the legs and abdominals on Mondays and Fridays; the chest, shoulders and triceps on Tuesdays and Saturdays; and the back and biceps on Thursday and Sunday. This allows for Wednesday, mid-week, to become a rest day, essential for muscular growth and strength.

As always, keep in mind the client’s current and past health history. If isometric movements are performed against considerable resistance, such exercises have the potential to increase blood pressure. If a client has reported a prior or current history of cardiovascular disease or stroke, ask him to speak with his healthcare professional prior to beginning an exercise program involving isometric exercises.

Creating A New Challenge for Clients

Varying a client’s workout program every 4-6 weeks is a given, if growth and increased strength are the goals. Upon reaching a plateau, trainers must be prepared to find new and innovative ways to challenge each muscle group. Isometric exercises lend diversity as well as benefits to a traditional bodybuilding workout. This helps alleviate boredom and prevents common overuse injuries sustained from consistently increasing weight loads. The benefits over time will speak for themselves!

Visit our site soon for Part 2 of the Isometrics experience, where we will explore optimal approaches to incorporate this style of exercise into a client’s training program, including sample exercise techniques, intervals, and much more!