For those of you who read the word “physics” and still opened this blog, I applaud you for being fitness professionals willing to challenge the breadth of your knowledge to learn a little more about how resistance forces impact the exercise selection for your clients.

I’m not going to lie to you: Physics has never been my strong suit. But I really wanted to understand this concept as it applies to my profession and share it with others who may also have trouble grappling with the concepts. Which means, I hope to explain the relevance of moment arms in the way that I learned to understand it myself. Hang with me here for a minute and a whole new aspect of kinesiology may open up to you.

What are Moment Arms?

A moment arm determines the influence of a force to produce (or prevent) the rotation of an object around an axis. 1

It is the shortest perpendicular distance between the line of exerted force (resistance) and the axis (the joint) attempting to resist that force. That force is imagined as an invisible line that you have to learn to visualize running to infinity in order to draw that other invisible, but perpendicular line–the moment arm line.

Below are my crude sketches of how to conceptualize moment arms of resistance forces. The three drawings depict the eccentric phase of a bicep curl progressing.

Imagine “A” is the joint axis (an elbow), “B” is the line of resistance force (that’s a dumbbell above it with no hand), and “C” is the moment arm. (C & B are conceptual, invisible lines).

Though this isn’t exactly to scale, the moment arm is shorter when the elbow is almost fully flexed (1st photo) than when it is almost 90 degrees (2nd photo).

Here’s the important thing to understand: The longer the moment arm, the more force being exerted on the joint, and therefore, the harder the muscles controlling that joint have to work in order to resist (or move) the force.

That means, when the weight is in your hand and your elbow is almost fully flexed, that’s a lot easier to “hold” than when your elbow is at 90 degrees.

We already have a basic understanding of this concept with regard to levers, right?

If your arm is the lever and you want to lift a weight in front of you with the most ease and efficiency, you will keep that weight closer to you, i.e., using a short lever. A bicep curl, or lifting a weight with a flexed elbow, will keep the weight closer to your body and the lever short; therefore you can manage much more weight than you can, say, trying to do a straight arm front deltoid raise, right?

Yes, see you get this! 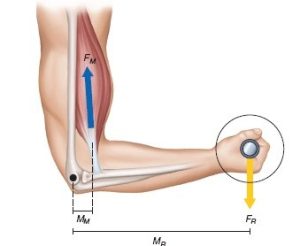 Why is it important for trainers to understand Moment Arms?

This diagram of back squat moment arms is a simple and clear way to understand how moment arms work within the context of exercise and how “seeing” them can help you program appropriate exercises.

The dotted line represents the line of force. The barbell on the back is (in this high bar position) pushing straight downward with the force of gravity. At the bottom squat position for this particular individual (taking into account torso length and limb length can change these lines for everyone. That’s a whole separate discussion!), drawing a line from the hip joint directly towards that line of force (you know, perpendicular) gives you that moment arm in green.

The blue moment arm represents the distance from the knee joint to the line of force. In this depiction, you can see that that moment arm for the hip is slightly longer than that of the knee. So that means the hips “work harder” than the knees on a high-bar back squat, right?

Not necessarily! True, the longer moment arm means more force needs to be applied around that axis than that of the knee, relatively speaking. But what do we know about the muscle groups around those joints?

Now you can take off your physics hat and put your trainer hat back on: What’s stronger? Your hip extensors or your knee extensors?

Even those with monstrously strong quads have glutes that are comparatively stronger. Even though the hip moment arm is longer, most likely this high-bar back squat will work the quads and the glutes fairly equally, given the differential in muscle strength of the two groups.

Now let’s take a look at a front squat. You don’t see a lot of folk doing these in the gym (at least not compared to back squats). 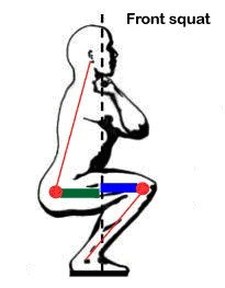 A cursory glance at this diagram makes it clear. The moment arm to the knee is equal to that of the hip requiring more force output from the knee joint (relatively speaking, since there is somewhat less demand on the glutes than a back squat, creating more demand on the “weaker” quads) consequently, making the quads work harder to extend the knee.

What about a low-bar back squat? This is when the bar is pulled down over the scapulae rather than resting on the upper traps. It may seem like this wouldn’t have a giant impact on moment arms and resistance forces when compared to a high-bar position, but it does! Pulling the bar down lower forces the torso to lean forward more, changing the force placed on the hips and knees to demand more of the glutes (and lower back). 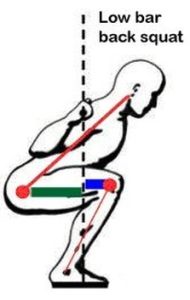 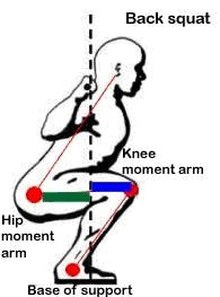 I can tell you, I have recently switched out my low-bar back squat for a front squat to save my lower back (which is pathologically problemated. A back squat will not inherently “hurt” your lower back unless you already have an issue like I do). It has helped me tremendously, in that, my back is less stressed, my quads are more stressed (they needed it!) and I can focus on more targeted glute development exercises that do not aggravate my lumbar spine.

Squats are a movement where moment arms are easily visualized and understood. So are bicep curls, leg extensions, and shoulder raises. But things can get really complicated with movements like hip thrusts, where a whole new equation needs to be worked out because the force vectors aren’t where you think they are.

The bar on the hip, for instance, is only one force. So are the floor and the bench your upper body is resting on. I can’t quite wrap my mind around that one yet, but if you’re interested, here’s Bret Contreras’ breakdown of the hip thrust.

Applying What You Can

As I mentioned, changing from the back squat to the front squat personally helped me spare my lumbar spine while still challenging my quads and satisfying my desire to lift heavy things. If you have clients with contraindications, understanding the moment arms and forces applied during certain exercises might help you reformulate.

Does your client really seem to struggle with a particular movement? Is one of your clients super tall and cannot for the life of him perform a pull-up? Take a look at another set of my high-tech sketches below. The first is a wide-grip pull-up setup. The second is a close-grip pull-up setup. Which one will be “harder” on the lats? 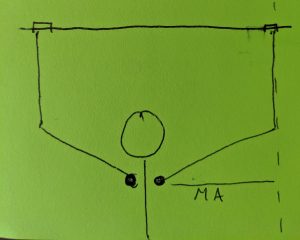 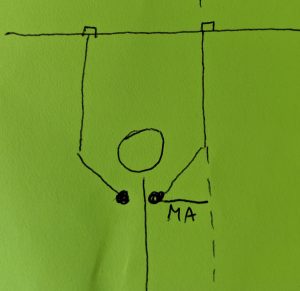 Do you have a client with long legs and a short torso who is always tipped forward when squatting? Or maybe your client hates lunges…is she more upright at the bottom of the lunge or does she lean forward? Where is the weight—in her hands or on her back?

Take a minute and roughly sketch out your client’s bodily proportions and positioning, and the different phases of the movement that is giving them a hard time and see if you can’t figure out how the moment arm might be tweaked to propel your client into more progress. 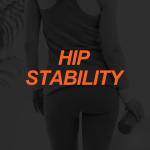 The Importance of Hip Stability in Runners 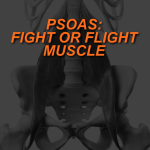 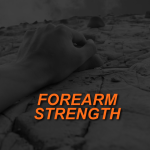 The Importance of Grip and Forearm Strength 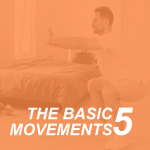 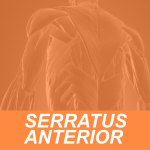 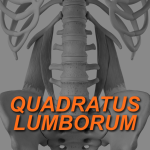