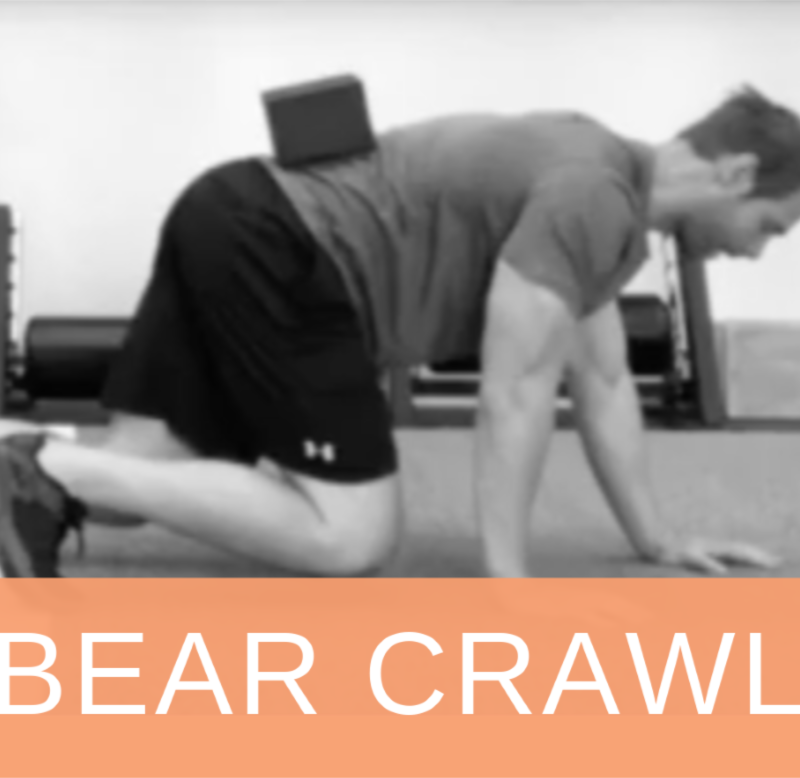 The focus of the most effective training program should be on the movement, not the muscles. This is why you might see the bear crawl performed frequently in the best training gyms. The bear crawl, a complete bodyweight movement, packs a big punch, working on strength, mobility, and stability.

Unfortunately, this extremely beneficial exercise gets botched far too often by trainers coaching incorrect form or prioritizing speed over technique. When done correctly, the bear crawl challenges your core as well as overall time under tension on your muscles. I can think of few better exercises that offers such a low-risk, high-reward ratio than the bear crawl.

Aside from the physical challenge, the bear crawl also increases body awareness, propioception, coordination, and even sharpens cognitive skills. What looks easy at first glance, is often more challenging for some who have never done a bear crawl. Don’t be surprised if your clients struggle to do this movement at first as is something that they are not familiar with. Take it slow and be patient.

While the bear crawl is primarily a total body, metabolic exercise involving all the major muscle groups, there is an increased need to resist movement from the back and hips while the limbs perform the movement, making this an excellent anterior core exercise (your torso has to resist twisting or turning). The bear crawl also improves both mobility in the shoulder and stability in the scapulae making this a great shoulder-friendly exercise.

Additionally, the quadriceps take on some of the load while moving forward, forced to maintain different degrees of flexion. This anti-extension force performed by the core in effort to stabilize the lumbar spine, may result in the “lower abs” feeling sore and worked the next day.

How To Do It Right

Start out in a quadruped position on all fours with hands under shoulders, knees bent under under hips, and toes curled towards you. Lift your knees 1-2 inches off the ground; from there you are ready to move. Without moving your spine or swaying the hips, move your opposite arm and leg at the same time; perform short steps and hold each step for 2 seconds to keep your form in check. Aim to crawl 15-20 feet and then turn around and go back.

Controlling the spine and the hips should be the main focus when doing Bear Crawls. When starting to teach this exercise, require the client to balance an object on their lower back (I like to use a yoga block) which will force them to own the movement and control their body, otherwise the object will fall off their back.

The object teaches proper alignment and should slow the exercise down a bit. Think: the more tension, the better. The bear crawl should not be an exercise that you can just mindlessly go through; it should require focus and engagement making this a much more demanding exercise. Plus, as a coach, the block prevents the cue, “No Shakira or  Elvis with the hips!” or “Slow down!”

Before implementing the bear crawl first make sure the client is a good candidate for crawling. Do they have elbow, wrist, or shoulder issues that might preclude holding their weight up in this position? If so, perhaps another exercise would better suit them. If there are no known issues, have them start off with an easier variation to get the “feel” of holding one’s bodyweight.

Not everyone is ready to do the moving part of the bear crawl, instead, be sure they can do static holds in the quadruped position first, with knees hovering off the floor. You can start clients with 10-second holds, and once they can maintain it for 30 seconds they, are ready for the moving bear crawl. Just like an exercise when you need more stimulus you should be able to progress the exercise for the client.

The bear crawl (moving forward) can be progressed by adding load such as placing a sandbag on the back. The sandbag increases the load but also forces the form to be stricter so the bag doesn’t slide off. Don’t be surprised if clients tell you it feels like cardio even though you are moving slowly under control. This is very taxing on the body and will drive the heart rate way up.

Besides moving forward you can also perform the bear crawl moving backwards. This variation will tax the shoulders as the burden of bodyweight is borne more by the arms than the legs. Think of climbing down a ladder. This is harder than the forwards crawl so work up to this variation.

Lateral bear crawls work multiple planes of motion and require a little more focus and coordination. Still focus on opposite hand and foot moving in unison. I like to go 12 feet down and back twice.

Spiderman crawls work mobility in your hips while challengin the entire core and shoulders, and still amping up the coordination.

Pushup stance crawl with feet on sliders (advanced move). Best to watch this one:

When done the right way crawling is one of the most effective movements that you can do. Slowing it down and not moving your hips or back changes the exercise completely making this an excellent exercise for beginners to more advanced clients. It’s hard to get hurt doing this exercise and not too many movements can match the benefits of what the bear crawl delivers. The skills gained from this one exercise can translate into improved strength and coordination in other movements. Plus, all you need is your own bodyweight and space! Try out the bear crawl in your next workout, task your clients with it, and let us know what you think. Can you come up with any other variations?