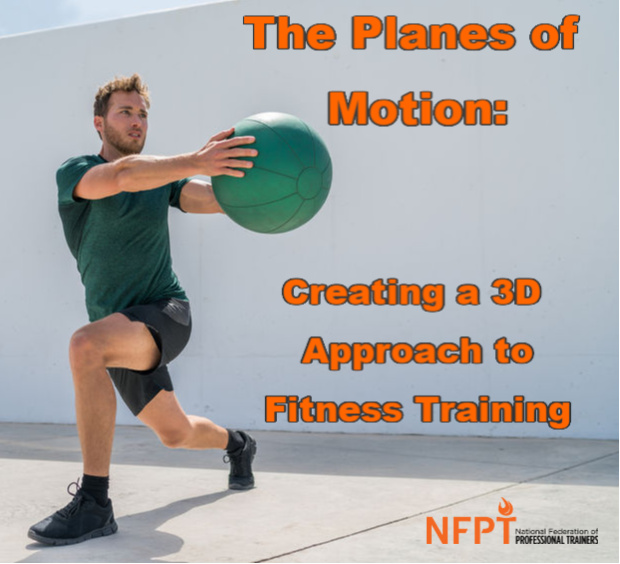 The human body is meant to move in all directions – forward, backward, side to side, up, down, and rotationally. In other words, the body exists and functions on a 3-dimensional plane. The term “planes of motion” is used in the context of Human Anatomy Kinesiology to illustrate this concept. Personal trainers can and should use the three planes of motion when programming for their clients. In doing so, clients will achieve greater stability and mobility, reduced risk of injury and overuse, and enhanced performance. 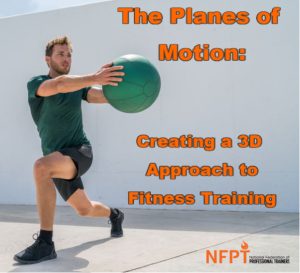 Traditionally, exercise programming has focused on muscle groups (versus joint actions). For example, training chest, shoulders, and triceps on one day, then legs, back, biceps on another day. Or, training lower body every other day and upper body on the opposite days. Both approaches are standard muscle group-based programming.

This is not to say this type of strategy is “wrong” or “bad” – it’s definitely not. But what might change (for the better) if we focus on joint actions in the three planes of motion, thereby creating a 3D training program? How will this enhance a client’s performance? Or correct muscle imbalances? 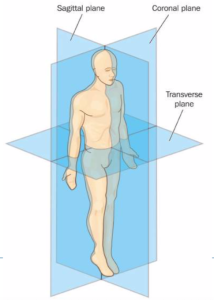 The body is divided into three planes.

The same approach works for the two other planes. Use an imaginary line to divide the body into the frontal or transverse planes. Movements that occur parallel to that line occur in that respective plane. For the frontal plane, it’s lateral movements (like shoulder abduction) and for the transverse plane, it’s rotational movements (like a chop or even a bench press) that run parallel to that plane. Keep practicing! Think of as many exercises or movements as you can and determine which plane they operate in.

Here are some basic principles you can apply to design a 3D program for yourself and your clients.

The human body is a dynamic machine meant to move in dynamic ways. By primarily training clients in the sagittal plane (with forward and backward/flexion and extension) movements, we are unintentionally facilitating the development of muscle imbalances, limited mobility, and uncoordinated movement in the inadvertently neglected planes. Apply the planar approach and you will have a complete, well-balanced programmatic lens by which to craft future workouts.