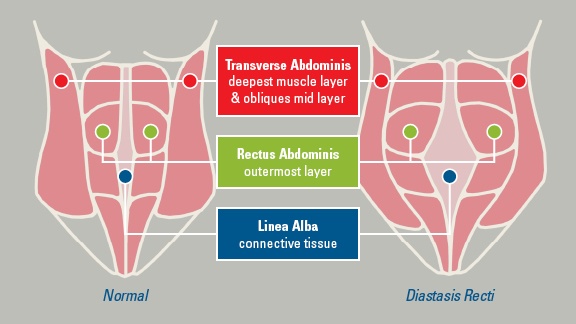 The purpose of this article is to bring awareness that a six-pack rectus abdominus requires recruitment of the transverse abdominis to sustain abdominal strength in order to prevent separation of the linea alba.

Without equal attention to the TVA, the linea alba will (see picture below) soon begin to weaken causing the medial line of the left and right rectus abdominis to separate, causing pain and sometimes protrusion of tissue between the muscle walls.

What is Diastasis Recti?

This condition known as a gap between the left and right rectus abdominis muscles is called Diastasis Recti (DR). [1,2]  (The condition, however has no associated morbidity or mortality and should be differentiated from an epigastric hernia or incision hernia, which can be ruled out using ultrasound[2].)

Who’s at Risk for Diastasis Recti?

It’s common for babies to be born with DR, especially premature babies. Usually no intervention is required and the gap will close gradually as the baby grows.

Later in life the risk of developing DR increases for adults who:

“Women are more susceptible to DR when over the age of 35, high birth weight of child, multiple birth pregnancy, and multiple pregnancies. Additional causes can be attributed to excessive abdominal exercises after the first trimester of pregnancy.”[4]

The separation known as DR usually runs from the xiphoid process to the umbilicus resulting in a ridge running down the midline of the abdomen. It becomes more prominent with straining and may disappear when the abdominal muscles are relaxed. The medial borders of the right and left halves of the rectus abdominis muscle can be palpated during contraction.

Prevention and Correction of Diastasis Recti

DR is a symptom of excessive and unsupported intra abdominal pressure, the same state that creates other pelvic and abdominal problems including hernia and prolapse. Intra-abdominal pressure increases when performing exercises such as squats, dead lifts, crunches, and the like. In fact any resistance exercise when the Valsalva maneuver (forcibly exhaling while keeping the mouth and nose closed) occurs (which keeps the chest and shoulders firm and rigid, bringing greater support to the arms) will cause unnecessary intra-abdominal pressure.

Correct breathing has to be a conscious effort in weight lifting sports. If breathing is not performed correctly during weight training it will lead to potential serious problems such as a dangerous spikes in one’s blood pressure. Improper breathing such as the Valsalva maneuver will lead to core weakness and improper musculature contractions; and as previously mentioned will lead to stretching/tearing of the linea alba.

When DR happens to weight lifters there should be an integrated program designed to re-align, re-connect and then strengthen the entire core musculature, rather than be addressed in isolation (and rather than focussing only on ‘closing the gap).

The following is not to be done when DR occurs:

To help build abdominal strength, (which may or may not help reduce the size of DR) the following is suggested [5]

All corrective exercises should be approached by pulling in the abdominal muscles rather than a pushing of them outwards. A favorite exercise among strength trainers to correct DR is:

*Consultation of a professional physiotherapist is recommended for correct exercise routines.

In effect, the strengthening must come from the inside out; i.e. the TVA, the inner, deepest abdominal muscle. The typical crunches, sit-ups, bicycle crunches do not effectively engage your TVA.

diastasis of the rectus abdominis muscle in the antenatal and postnatal periods: a

6 Engelhardt, Laura (1988). “Comparison of two abdominal exercises on the reduction of