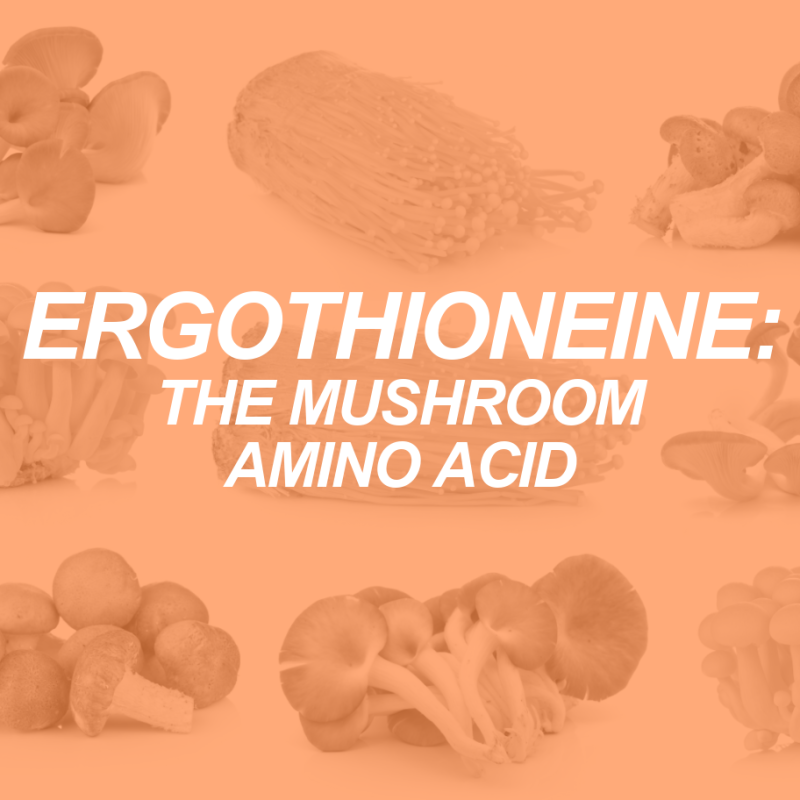 Mushrooms, members of the general class of edible fungi, enjoy popularity in global cuisine. From the exotic truffle to the ordinary white caps, mushrooms now also figure prominently in scientific research as one of the top nutritional sources of the amino acid ergothioneine (ERG). Read on to learn about the health benefits packed into these tiny powerhouses, including potential medicinal uses, enhanced aerobic capacity, and extending life expectancy.

Nature does not supply an abundance of the amino acid ergothioneine, except for some fungi and other microbes. As such, humans need to consume ergothioneine through a variety of food sources. Mushrooms rank as the leading dietary source of ERG. More and more, the evidence for ERG as a potential antioxidant and anti-inflammatory source is mounting. Its ability to prevent or mitigate many of the ailments we associate with the aging process has led some scientists to the nickname “longevity vitamin.”

Circulating levels of ERG seem to peak sometime during young adulthood. A naturally occurring transport protein known as OCTN1 latches onto ERG and distributes it to the rest of the body. While this transport protein also takes other compounds around the human system, it seems to favor ERG, carrying it 100X more efficiently than any other ingested nutrient.

Perhaps carrying out some evolutionary protective purpose, ERG tends to settle in high concentrations within those cells/tissues at greatest risk for inflammation and/or oxidative stress, including the ERG-dense mitochondria. As the years go by, however, the body somehow loses much of its earlier ability to access and accumulate ERG. Cells lacking in OCTN1 transport protein clearly become vulnerable to oxidative stress, resulting in increased DNA damage.

Putting Mushrooms on the Menu

Limited intake of ERG in the typical American diet may affect one’s long-term health and life expectancy. Mushrooms do not figure prominently in most American meal plans, especially in comparison to other countries. Italy’s inhabitants traditionally have a decidedly longer life expectancy than Americans. Apparently, their typical menus include a plethora of mushrooms; consequently, Italians boast a 4-fold greater amount of ERG than most Americans. Similar findings exist for those who live in Finland, France, and Ireland.

In the spring of 2021, scientists published the data from a study spanning 20 years. Researchers followed the dietary habits of 15,000 American participants. The control group did not include mushrooms in any of their meals during the length of the study. In comparison, those individuals who consumed even small amounts of mushrooms presented with a 16% lower mortality rate. When some of the subjects swapped mushrooms for red meat or processed meat products just once daily when preparing recipes, they exhibited a 35% reduction in mortality from any cause.

A longitudinal study conducted in Sweden involved over 3,200 adult men and women who adhered to clean, healthy diets. Researchers followed/tested the participants over the course of 21 years. Out of the 112 metabolites measured, data revealed that higher plasma ergothioneine levels most strongly aligned with a decreased risk of cardiovascular-related diseases and a reduced mortality rate.

Another study found a strong correlation between low levels of circulating ERG and increased frailty as well as cognitive disorders and Parkinson’s disease. New research suggests that individuals who include an abundance of mushrooms in their regular weekly menus suffer less from bipolar disorder, depression, and schizophrenia. Most likely the high levels of antioxidant-promoting ergothioneine found in many mushroom varieties once again function as a protective mechanism against cell and tissue damage.

Dr. Bruce Ames recently included ERG in his “Triage Theory”. Dr. Ames feels that the human body utilizes certain micronutrients as if in a triage situation, with priority given to functions that support reproduction and survival. If an insufficient amount of ERG exists, long-term health potentially moves to the bottom of the list, leading to reduced life expectancy.

ERG and the Gut Microbiome

The relationships between depression and gut microbiota, particularly those involving the immune system, have garnered much focus recently. Scientists found a direct correlation between the presence of the gut bacteria L. reuteri in rats and high levels of circulating ergothioneine. They took this one step further, giving the rats prophylactic doses of oral ergothioneine, only to discover improvements in REM sleep abnormalities as well as diminished signs of deleterious social behaviors.

Stress occurs as a result of other factors besides just emotional triggers. Intense repetitive bouts of exercise can elicit a high level of stress, along with oxidative damage and inflammation. Antioxidants alone cannot always manage such situations; but secondary antioxidants can activate a cellular pathway known as NRF2, which potentially ameliorates the problem. Ergothioneine falls into this category and may actually improve aerobic exercise performance, extending time to exhaustion and reducing accompanying exercise-related stress.

Given all of the unusual potential exhibited by fungi, mushrooms in particular, some professionals support the idea of making mushrooms their own “kingdom” within the current USDA Food Groups. At the very least, proposals to recognize mushrooms when providing nutritional guidance will flourish as more clinical trials occur.

Cathleen Kronemer is an NFPT CEC writer and a member of the NFPT Certification Council Board. Cathleen is an AFAA-Certified Group Exercise Instructor, NSCA-Certified Personal Trainer, ACE-Certified Health Coach, former competitive bodybuilder and freelance writer. She is employed at the Jewish Community Center in St. Louis, MO. Cathleen has been involved in the fitness industry for over three decades. Feel free to contact her at trai[email protected] She welcomes your feedback and your comments!