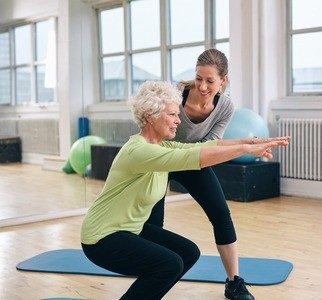 Program both open and closed kinetic chain movements for your clients so they get a variety of movements that mimic activities of daily living and sports. Also, well-rounded knee strength. 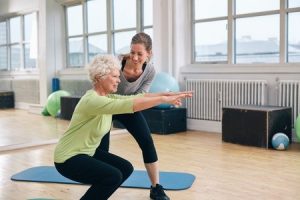 The Squat: This is the best exercise to do when the mechanics are correct and pain isn’t present.

Teaching proper squat progressions and alignment corrections is essential because people squat every time they stand up or sit down.

If any knee problems exist there may be discomfort. Differentiating muscular fatigue from pain by communicating clearly with your client is crucial to preventing further damage to the knee.

The role of a personal trainer is to analyze the movement, detect any imbalances or issues and design an exercise program. Proper form while squatting is essential for injury prevention. The most critical cues for squats are keeping the knees, hips, and toes in alignment.

Leg Press: This movement is not as demanding as the squat due to the stabilized nature of the laying position. It is the second most complete and safe exercise for the lower body and strengthening the knees.

Make sure the knees don’t travel over the toes and that the knees don’t buckle inward. Tempo should be controlled with no locking out at the top end of the range of motion. Any visible ballistic bouncing at the bottom should be avoided.

Lunge: This movement mimics the act of reaching forward to pick something up off the floor as you leave one foot back and move one forward as in to step and reach.

Choose the correct modifications for lunges, load, speed and movement pattern according to the client’s unique health history and current abilities.  Progress to lunges after mastering a squat or leg press if the client cannot support their own bodyweight.

Leg Extension: The leg extension strengthens the quadriceps muscle. However, many experts warn that the biomechanics of this movement on this type of machine places unnecessary stress on the anterior part of the knee. This is because the loading is perpendicular to the long axis of the tibia.

As the joint moves upon contraction of the quadriceps, “shear force” is created which places the knee joint in a compromising position for optimum safety. During the performance of a leg extension, the quadriceps reacts by pulling the tibia forward.

The ACL opposes this action by trying to prevent the translation of the tibia. This phenomenon called tibial translation places a huge amount of stress on the ACL and therefore something to give specific thought to.

Leg Curl: Some argue against the “functionality” of this movement because of the single joint action, which only allows the hamstring to function as a knee flexor. Isolated exercises like leg curls, when performed thoughtfully are the building blocks for functional movement. There is a time and place for both in most exercise programs.

Shear forces are great when performing leg extension compared to squats, leg presses, and lunges. Assess adequately and communicate with your client’s medical practitioner for confirmation and clarification. Use the leg curl cautiously with controlled, non-ballistic movements.

Which Type of Exercise is Better For Knees?

There is a risk to benefit ratio with all exercises. Over the last 10 years since we started to hear the whispers of the “better for your knee” exercise selections, here is what I have found:

For the argument presented, when we think of the shear compared to compressive forces applied to the knee when performing a leg extension versus a squat, leg press or lunge, it is clear that the better of the exercises are going to be the squat, leg press and lunges.

Needless to say, the squat, leg press or the lunge can easily become worse exercises than the leg extension if performed in the incorrect manner. It is up to the fitness professional to coach a client and know how to progress or regress a movement.

There is NO WRONG exercise or movement. There are WRONG applications of exercise and movement.

Below you can find the pros and cons of the movements that have been mentioned in this article.

General Fitness Client or Athlete with no knee issues

The following guidelines were confirmed and are used by the office of Al DeSimone, South Florida Institute of Sports Medicine in Weston, FL. Per Paul Buchanan, PA-C at the South Florida Institute of Sports Medicine, the ACL is the most common of the general fitness and athletic injuries. The suggested practice for a patient cleared for exercise in a post-rehab setting is a series of the following protocols:

After reviewing all the available published and unpublished data, and speaking with and consulting with many fitness professionals, the following conclusions can be easily made:

Do OKCE’s increase leg strength? Yes, they do. But when you look at the numbers, the percent values are so far apart that we have to reconsider using leg extensions and leg curls to build size, strength, and speed if the client can perform CKCE’s with no contraindications.

In a study by Fiatorone in 1990 that evaluated increases in strength in the lower body, it was shown that OKCE’s will increase strength. After 8 weeks of training, the CKCE group had increased strength by 175%, while the OKCE group increased only 48%.

Nevertheless, an increase was seen which in part does justify the use of the leg extension. However, the risk of shear forces being higher and eventually causing excessive cartilage breakdown outweighs not being able to work the legs at all for the person who cannot perform CKCE’s.

For those that are able and want to keep their knees safer for the long run, we can conclude that sticking to CKCE’s is the way to go for maximum knee safety and functionality.

[info type=”facebook”]Join the conversation on the NFPT Facebook Community Group.[/info]

5. Mechanics of human joints: Physiology, Pathophysiology, and treatment. Unsworth, A. 1993

10. Bursitis, The Basics, What you should know about bursitis, 2012 Carol Eustice, ASCP, ARHP