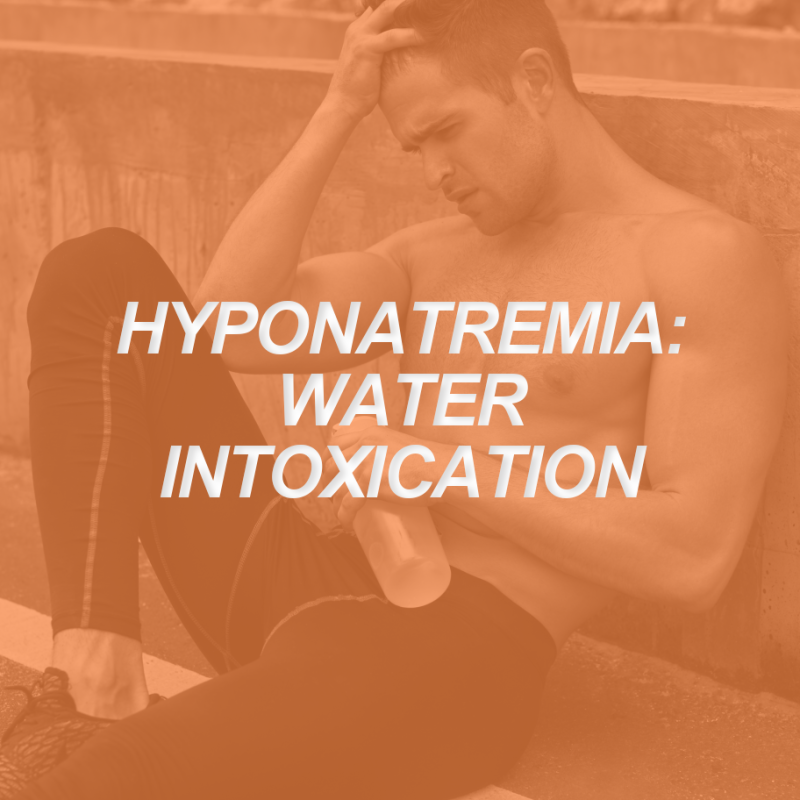 For peak performance every day, athletically and otherwise, the human body requires water. Our cells, bones, organs, and muscles count on sufficient hydration to function properly. However, overloading the body with fluids can cause water intoxication, or hyponatremia, leading to serious health consequences.

Safe levels of human body hydration normally hover between 1% hyperhydration and 3% hypohydration. Exercise-associated hyponatremia, a potentially dangerous malady, develops when an individual consumes more water than his kidneys can eliminate. The water excretion rate of a healthy adult approximates 20 L/day, or roughly 800-1,000 mL/hour. In order to keep the body in safe homeostasis, the maximum amount of water intake for an individual with healthy renal function need not exceed 1 liter each hour. Even when accounting for losses from sweat and other physiological principles, more volume than this can rapidly bring on hyponatremia complications.

The Dangers of Long-Distance Running

In an effort to better understand the mechanism of water intoxication, scientists studied close to 800 runners who participated in the 2002 Boston Marathon. Prior to the event, subjects completed a survey regarding personal demographics and training history. After the race, runners provided a blood sample and completed a questionnaire detailing their fluid consumption and urine output during the race.

Of 766 runners who signed up for the study, 488 provided a usable blood sample at the finish line. Of these, 13% had hyponatremia (a serum sodium concentration of 135 mmol/liter or less); 0.6% showed signs of critical hyponatremia (120 mmol/ liter or less).

The Role of Sodium

Sodium plays a vital role in fostering normal blood pressure, nerve and muscle function, and of course the body’s fluid balance. When hyponatremia hits an athlete, particularly when sodium levels drop precipitously (below 135 mmol/liter) as a result of being diluted by excess circulating fluid, the low osmolarity of his body’s extracellular space relative to the higher intracellular level causes fluid to move from one to the other. This occurs as the body strives to maintain homeostasis. When the amount of intracellular water increases, cellular edema develops. Such an occurrence in the brain — confined within the skull and having no place to expand — can rapidly turn life-threatening.

Not only elite athletes run the risk of water intoxication. Records culled from the U.S. Army Inpatient Data System helped to identify all hospitalizations for hyponatremia among new military recruits between 1996 and 1997. Seventeen medical records met the criteria; subsequently, researchers analyzed the events leading to these soldiers’ hospitalizations.

77% of the hyponatremia cases occurred during the first four weeks of basic training. Nine of the patients had consumed water in excess of 2 quarts every hour. Three deaths occurred as a result of overhydration, cerebral edema having resulted from a water intake of over 5 L (usually 10-20 L) of water during a period of a few hours.

It seems evident that hyponatremia resulted from far too aggressive fluid replacement practices for soldiers training out-of-doors in extreme weather conditions. Following the incidents from 1996 -1997, the Army revised their fluid replacement policy, giving close consideration given to both heat stress and physical output.

The pathogenesis of hyponatremia often proves difficult to pinpoint. Typical causes include over-consumption of hypotonic fluids, inappropriate release of antidiuretic hormone, impaired kidney function, and/or the leaking of fluid into intestinal and other cellular regions.

Since 1985, when exercise-induced hyponatremia first came to the attention of the medical and athletic communities, two theories somewhat at odds with each other have attempted to describe the etiology/pathology of this syndrome. One camp favors the theory that hyponatremia only surfaces in athletes who lose water and sodium concurrently during prolonged exercise, and fail to adequately replace this key electrolyte. The second theory claims that symptoms appear when an athlete generates a total body overhydration situation over the course of a long event.

Perhaps the fault lies with coaches and trainers, who have historically urged athletes to remain well-hydrated during extended bouts of exercise, particularly in high temperatures. A series of case studies reported over two years’ time have established that in fact whole-body fluid overload incites the severe symptoms of hyponatremia, and perhaps reduces the blame placed upon sodium losses. However, some experts still hold fast to the notion that electrolyte-infused fluids might very well prevent the chance of sodium spilling over into other areas of the body, thereby disrupting the osmoregulation which the body tries so hard to maintain.

The Key to Protecting Kidneys

The average percentage of water in a person’s body at any given point in time varies, from about 45% to as much as 75%. Properly functioning kidneys can remove 20-28 liters of fluid from the body over the course of 24 hours; however, their capabilities peak at excreting a liter per hour, as referenced above. Since the kidneys themselves contain between 80 and 85% water (second only to the brain), we begin to see the precarious balance and how easily the scales can tip dangerously.

Personal trainers and coaches bear the responsibility of educating clients on the importance of fluid intake, not only during training/practice, but also when participating in competitive events. Stressing the potential risks of both hypohydration and hyperhydration on athletic performance helps paint a more complete picture. A key take-home point should focus on consuming no more than 1 liter of fluid per hour, thereby enabling the kidneys to safely eliminate excess water. Discussion of electrolyte supplementation can help facilitate a prudent pre-workout meal, as well as addressing the athlete’s needs both during and immediately following an endurance event.