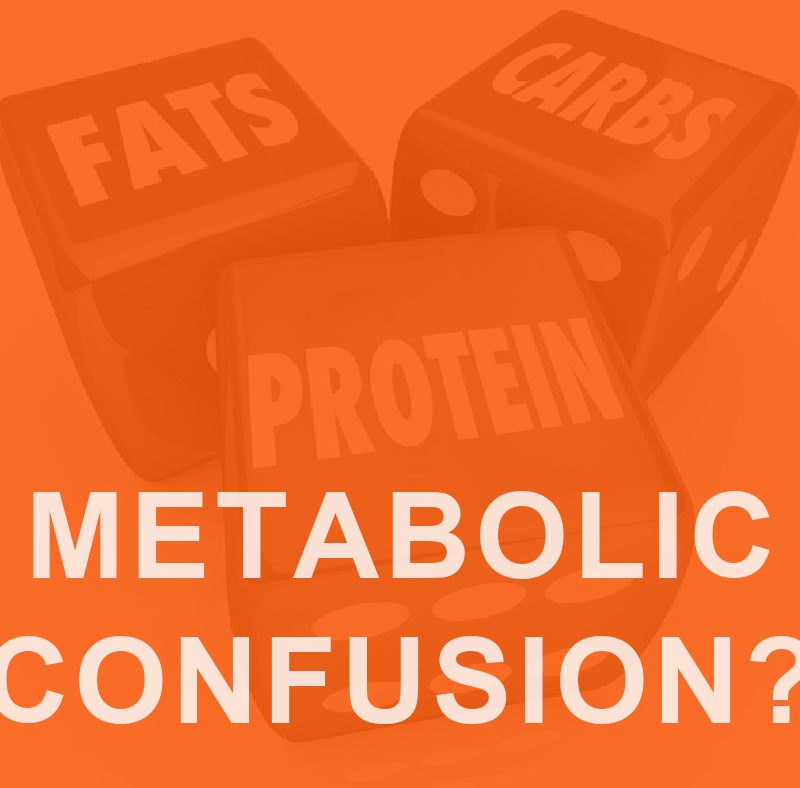 Among many of the weight loss approaches that are conceived these days, metabolic confusion has arrived on the scene.

Metabolic adaptation refers to the means by which metabolism adapts to one’s lifestyle over time. As one consumes fewer calories and burns them in exercise-induced excess, the general idea behind common “dieting”, one’s metabolism adapts and gets stingier with energy from calories and stored fat, doing the protective thing and slowing down what it uses in an effort to conserve the energy reserves which are starting to run low. Clients often complain that they have “hit a wall”, after which further weight loss comes to a standstill regardless of their behavior.

In contrast, the metabolic confusion platform promotes an eating style that alternates between high and low-carb days (usually causing a variance in caloric consumption). While this plan affords the dieter more flexibility than traditional meal plans, its restrictive nature and the need for precise decision-making with regard to macronutrients poses challenges to adherence over the long haul. Can this method work for the average client?

The Physiology Behind Metabolic Confusion

Carb cycling, the fast and effective weight loss process created by nutritionist Lucy-Ann Prideaux, maximizes fat loss without deprivation of either nutrition or energy. Instead of aiming for a set number of calories each day, she prescribes carb intake increases or decreases every 2-3 days.

Proponents of the diet believe it helps “trick” the body’s metabolism into working harder, resulting in fat loss. They claim that alternating between high and low-carb days will “confuse” the body’s metabolic rate, making it work harder to adapt to changes in calorie intake, especially when coupled with prudent exercise.

Experts however believe we lack the true ability to “trick” our metabolism into higher gear; however, such a cycling plan may prevent it from slowing.

Research experiments seem to uphold the cycling premise, as in the case of the following trials run by professors in Korea. Seventy-four subjects with BMI over 25 engaged in 6 weeks of either a carb/calorie-shifting diet (CSD) or a carb/calorie-restricted diet (CR). The research protocol consisted of three 2-week phases. For individuals in the CSD group, each 14-day phase encompassed 11 days of calorie restriction over four meals every day, allowing a full 4 hours between meals. The remaining 3 days allowed the volunteers to choose their own meals. CR subjects routinely received a pre-determined, low-calorie diet.

The resulting data indicated significant weight and fat loss started and continued for at least a month of follow-up in the metabolic confusion group. During three CSD phases, subjects also witnessed a decrease in plasma glucose, total cholesterol, and triacylglycerol levels, greater than those in the CR group. In addition, subjects who engaged in calorie-shifting reported decreased hunger and overall satiety satisfaction.

The same result did not occur among those whose calories remained constantly restricted.

Exercise leads the body to tap into its carb stores for energy; high carb days align optimally with strenuous training when the body requires a surplus of energy. On rest days or those involving lighter workouts, a reduced carb intake makes scientific sense. As the body’s carb reserves approach depletion at the end of a low carb cycle, the high-carb day recharges energy and stokes the metabolism, leading to a greater fat loss.

High carb days can include anywhere from 300-500+ grams per day.

Low Carb Days: (for rest days or light workouts such as a walk or hike)

Three macronutrients make up every food source we consume: protein, carbohydrates, and fat. While many foods contain all of these macronutrients, most skew heavily toward one or two of the three. Meat contains abundant amounts of protein and also some fats. Breads, cereals and pasta contribute mostly carbohydrates, while nuts and nut butters contribute mostly fat and just a bit of protein. The human body needs all three in some capacity to function. The amount of protein consumed generally remains about the same for both higher and lower carbohydrate days. Experts suggest increasing fat intake on lower carb days, as an energy substrate, while higher carb consumption requires fewer fats.

Devotees to metabolic confusion report eating fewer calories overall (in the form of carbs) without feeling deprived, increasing successful adherence. The key component to this plan — what doctors call a “lifestyle change” –requires an individual to conquer the many psychological barriers that stand in his way of fully embracing such a major lifestyle alteration, even though the outcome justifies the means.

Given that typical carb cycling schedules require detailed and vigilant “bookkeeping” of macronutrient consumption, as well as a significant amount of time and nutrition planning, experts view it as an intermediate to advanced nutrition strategy.  Most proponents of this meal plan include elite athletes, bodybuilders, and professional models. However, we must encourage interested clients not to abandon their desire to try this lifestyle change; it can work very well for highly-motivated amateurs.

“Adherence is the most important thing for any diet to be successful, and we know people don’t stick with overly restrictive diets,” says Brad Schoenfeld, Ph.D., Director of the Human Performance Lab at CUNY Lehman College in New York. “Flexible diets allow you to lose weight or have success while eating a much wider range of foods.”