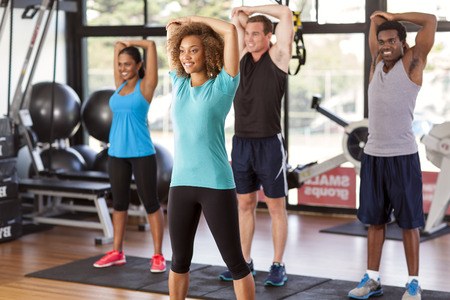 A question that frequently arises in the fitness industry is when to apply what type of stretching, and why.

If you are fortunate enough to be involved in a particular industry for a significant number of years, you will certainly gain experience in the field. There will always be a few basic tenets of the job that will remain with you, those “staples” that provide the groundwork for the industry. Also, as the years go by and new knowledge is attained, another aspect on which you can always count is change within a dynamic industry.

The shifts may be subtle, like designating Fridays as “Casual Day” in a company known for requiring proper business attire each day of the week. The changes can often be significant as well; think of the medical field prior to the discovery of antibiotics…or even anesthesia, for that matter! These are changes for which we can all be grateful!

The fitness field is no exception. We too have seen changes across the board, from gym attire to music options to body mechanics and safety. One of the more dramatic shifts pertinent to our industry is the viewpoint on stretching.

In a higher-impact aerobics class, such as “Cardio Kickboxing” or “Step It Up” step aerobics, a certified instructor will be knowledgeable on the time and nature of stretching during the hour of exercise. He will also choose stretches appropriate to the movements. In years past, ballistic stretching was believed to be the optimal warm-up for such programs. Ballistic stretching involves purposely forcing the body to move in such as way as to exceed its range of motion. The early parts of such classes often involved bouncing, twisting, and several other jerky and uncontrolled motions…all being performed on muscles that are cold and unprepared.

As research into kinesthetic awareness deepened, it became clear that ballistic stretching could possibly do more harm than good. It did not take too long for that significant change to spread throughout gyms nationwide. Soon instructors were beginning classes with motions that would better prepare the bodies of their participants for the exercises forthcoming over the course of the next hour. This form of stretching is known as dynamic stretching.

Dynamic stretching involves the active and purposeful tightening of muscles, in an effort to mobilize joints gently through their full range of motion. Although dynamic stretching requires a greater level of coordination, it is nonetheless increasing in popularity, most notably among athletes, coaches, trainers, and physical therapists. This is most like due to its benefits in improving functional range of motion and mobility in sports. Dynamic stretching has been observed by athletes to improve such skills as agility, speed and acceleration, all of which are valuable when engaging in a variety of sports. 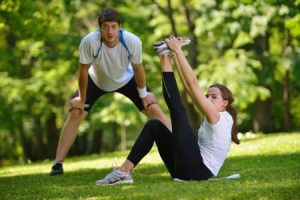 How Does Stretching Work?

What is the physiological action that enables the body to perform such movements? When preparing for any action, the human body’s multitude of mechanisms must to activated and stimulated.  When the body executes a series of stretches while in motion, signals are sent from the brain to the muscle fibers and connective tissues in that particular anatomical area. Core temperature begins to rise, increasing blood flow to the areas in action; this is a critical component in the chain reaction of supplying the energy needed to move.

Concurrently, muscle fibers and connective tissues will gain more flexibility, ultimately rewarding the athlete with an increased motion.  Over time, this has the added benefit of preventing injuries. Prior to lining up for a half-marathon, for example, dynamic stretching can alleviate any hip stiffness resulting from intense over-training. As any avid runner or cyclist knows, while training and performance are great, reducing the risk of an overuse injury is just as important.

Focus On The Goal

Another important factor in any competitive sport is what coaches refer to as “putting your head in the game”. Mental visualization techniques are used by many Olympians as well as competitive bodybuilders; if you are able to envision crossing that finish line, or lifting a personal best, chances are greater that your mind will allow you to work intensely enough to make this vision a reality. Along those lines, a regimen of dynamic stretching can facilitate getting mentally prepared for the challenges that lie ahead. Conversely, static stretching during a warm- up tends to be more relaxing, potentially guiding the body into a state of being that may lead to a difficult transition into competition mode.

Even when just warming up, an athlete must still exercise caution. Therefore, it is suggested that dynamic stretching exercises be performed in sets of 8-12 repetitions. It is also important to stop when fatigue sets in. Tired muscles have less elasticity, which decreases range of motion; and that competitive event has not even begun yet! 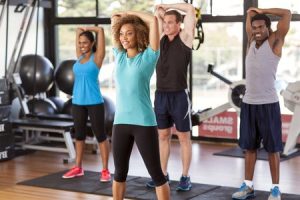 Know When To Hold Still

There are, however, many proponents of static stretching, the method of holding a stretch in a challenging yet comfortable position for 10-30 seconds. Some research favors a sustained static stretch of up to 60 seconds. Static stretching is regarded as the most common form of stretching for the general public or average fitness participant, since it is considered safe and effective for improving overall flexibility.

As one might expect, the physiology of static stretching differs from the cascade of events occurring during dynamic stretching. In this scenario, the muscle fibers elongate, ultimately increasing flexibility in the muscle tissues. Doctors and physical therapists often see the unfortunate but inescapable results of immobilization, either after a cast has been removed, or upon attempting to become more active after a period of injury recovery. Since soft tissues will inherently shorten unless moved, experts suggest take each joint through its full range of motion once a day to increase mobility.

There are many advantages and benefits to engaging in a static stretch regimen. Such movement prevents the soft tissues from absorbing high amounts of energy over a short period of time, which was ultimately the problem with ballistic stretching. If relaxation is one’s goal, static stretching generally will not initiate a strong reflex response, making it an ideal way to ease into an athlete’s badly needed “quiet time”. Post-workout is the optimal time to perform static stretches, since the muscles are already warmed up, rendering joints and ligaments much more elastic than is found pre-workout. In fact, such relaxing movements after intense exercise are valuable in injury prevention and alleviating the intensity of natural muscle soreness.

As with most 2-sided issues, there are several drawbacks to the performance of static stretches, most of which relate to the timing of such stretching. When performed prior to an athletic competition, static stretching may have a negative impact on an athlete’s physical mobility. This form of warming up may limit the body’s reaction time as well as the muscles’ ability to properly fire when called upon to perform. Such diminished effects may last for up to 2 hours…well past the competitive event.

A research study performed in 2000 looked at male army recruits in an effort to determine if static stretching would reduce the risk of injuries. It was determined that static stretching didn’t result in a significant reduction of injury occurrence; rather, results showed that the greater predictor of potential injury was an overall poor level of aerobic fitness. Thus, the researchers concluded that there was little if any benefit to performing static stretching if injury avoidance is the goal. Moreover, static stretches may actually render a muscle more prone to injury, since such movement pre-workout can induce micro-trauma to the tissues.

Whether your clients are seasoned participants, weekend warriors, or competitive athletes, they will look to you for advice not only on workouts and sports-specific exercises, but for safety as well. Learning the pro’s and con’s of these different stretching modes is one of the most important tasks you can undertake in an effort to best serve a client’s needs.