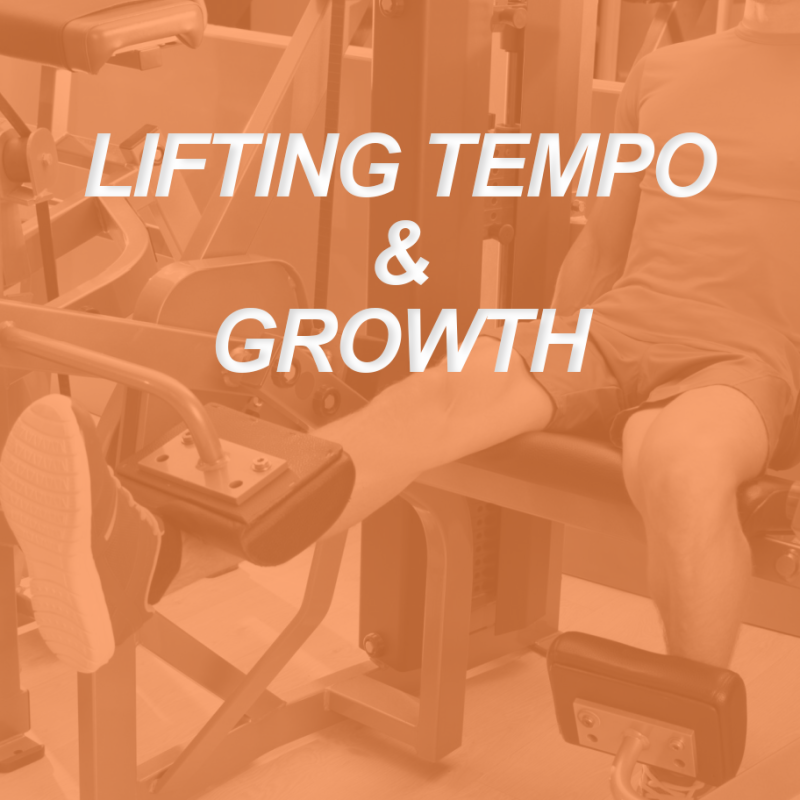 Understanding lifting tempo is complicated enough for trainers, and most likely completely escaping your clients’ attention. Science reveals different outcomes for how we apply such cadences in our lifting, specifically with regard to hypertrophy and strength gains.

Bodybuilders and other resistance-training enthusiasts often extoll the virtues of slowly executed eccentric actions. They base such reasoning on the hypothesis that slower eccentric tempos induce a greater magnitude of muscle-damage and endocrine responses, and thus a greater consequent hypertrophic response. Indeed, the literature suggests that the greater time under tension promoted by slow eccentric phase increases the degree of microdamage following resistance training. Given that muscle tissue microtears/damage enhance hypertrophy, we can understand how a longer eccentric phase may optimize the growth response.

Coaches, trainers, and bodybuilders denote the duration, or tempo, of a repetition using a 4-digit number, such as 1-0-2-0. The first numeral represents the eccentric phase, the second numeral identifies the isometric transition at the top of the movement, the third denotes the concentric phase, while the fourth numeral represents the transition at the bottom of the movement. The sequence of 1-0-2-0 would mean that the eccentric phase lasted for 1 second and the concentric phase took 2 seconds, with no measurable transition period between actions.

Sometimes you may see only three digits, 1-0-2, as the transition (the last digit) is presumed to be 0. And if you see only two digits, that also presumes that the concentric phase should be carried out quickly as possible.

Currently, experts differ on whether manipulation of movement velocity during resistance exercise has an effect on hypertrophy of specific muscles. However, several experiments set out to determine just that.

Some research indicates that muscle hypertrophy after eccentric training interventions seems velocity-independent, when time under tension, load magnitude, and range of motion remain consistent. However, given the fact that controlled movement plays a major role in joint loads, slower velocities allow for superior motion control/fewer fluctuations of acceleration observed during eccentric contractions. These aspects support the advantage of such training in special populations such as older clients with frailty issues and/or those with neurological/musculoskeletal challenges. In addition, the extended time under tension during a single repetition in slow eccentric training may provide a superior stimulus for tendon adaptation, compared to fast eccentric movements.

The Physiology of the Tempo

One study aimed to understand the physiological responses between slow 6-0-2-0 (slow) and moderate 2-0-2-0 (regular) eccentric cadences. Subjects executed five sets of bench press to failure, using 70% of 1RM. Data revealed that the participants performed more repetitions during each set using a regular cadence, but experienced a greater total time under tension during slow cadence moves. In addition, the post-exercise levels of lactate, creatine kinase, and testosterone all rose after a 6-0-2-0 pattern of movement.

Another similar study compared the impact of varying different eccentric tempos on hypertrophy and strength during an isolation exercise. Thirteen participants, whose 1RM for a squat averaged approximately 2x their body weight, performed unilateral leg extensions. One leg moved in a faster eccentric tempo of 1-0-1-0 while the other leg engaged in a slower eccentric cadence of 3-0-1-0. Over the course of the 8-week experiment, total workload and intensity remained constant.

The data showed that whatever the chosen tempo, both legs gained strength during this exercise. The hypertrophy gains were similar, with the 1-0-1-0 showing a slight edge over the slower cadence. When questioned about their rates of perceived exertion, the participants reported that the slower eccentric contractions definitely seemed more difficult.

An even more in-depth, muscle-specific study looked at the effects of altering the duration of the eccentric phase in isotonic contractions on hypertrophy and strength of the quadriceps femoris. The term quadriceps femoris muscle means “four-headed muscle”, hailing from the Latin term encompassing the four individual muscles: rectus femoris, vastus medialis, vastus lateralis, and vastus intermedius. Out of all of these, only the rectus femoris crosses both the knee and the hip joints.

In this study, ten healthy young adults performed unilateral isotonic knee extension exercises, with each leg assigned to an eccentric move lasting either two or four seconds. Each of the subjects’ legs performed five sets using 70% of 1 RM until muscle failure, with three minutes of rest between sets. The study lasted for eight weeks.

While all muscles increased in size over the duration of the experiment, only the vastus medialis seemed to favor the 4-second eccentric move, leaving researchers with the question of whether different types of muscle tissue might favor a different contraction cadence for optimal hypertrophy, a phenomenon referred to as “nonuniform hypertrophy”.

Strength and conditioning coaches often employ a strategy of lowering loads slowly and under control in the eccentric (lengthening) phase of normal training. Understandably, an athlete displays greater strength when lowering a weight eccentrically than when engaging in a concentric lift, to the tune of 30-50%.

Some strength coaches also endorse the occasional eccentric-only workouts. They recommend choosing a weight that exceeds the individual’s unassisted lifting capability. The athlete spends several seconds lowering the weight, while a training partner or the coach himself aids in the concentric lift. A common problem with such training stems from the “human nature” aspect of choosing a lighter weight, such that the eccentric phase does not prove quite so daunting. A heavyweight really will provide the greatest long-term growth effect, so an athlete must ensure that his lifting partner feels up to the challenge.

From a practical point of view, the differences elicited by slow versus fast eccentric contractions seem to prove statistically very small with the currently available data. Still, this minute advantage could benefit very advanced bodybuilders and high-level athletes, or perhaps, breaking plateaus.

Eccentric Training: How Moving Slow Can Make You Explosive

For maximal strength gains, should you use slow eccentrics?